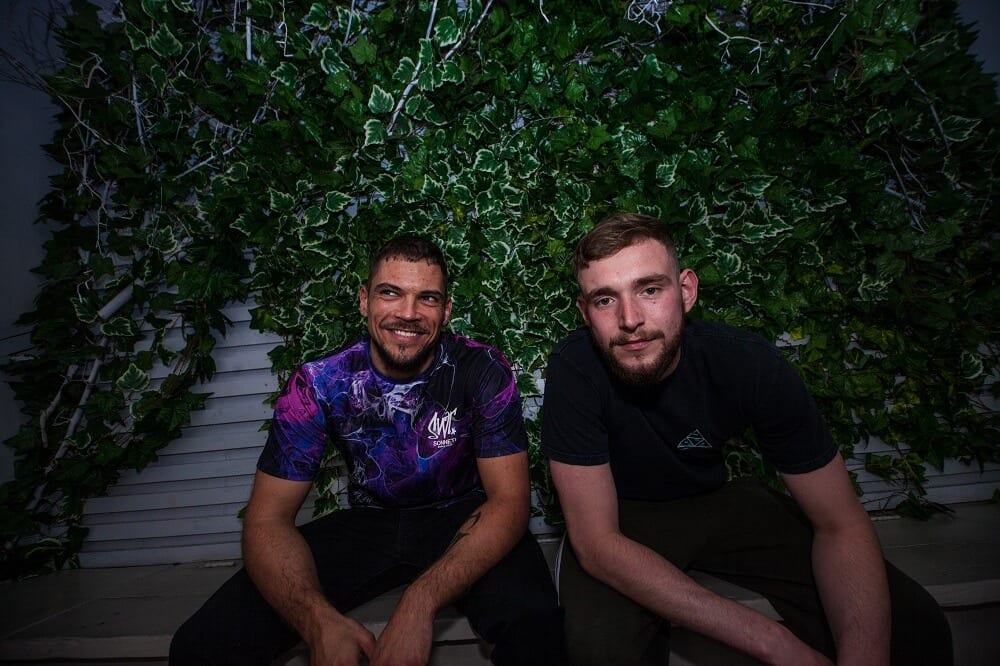 Forward thinking, never typical but always slamming, always evolving; the label have been relentless in their release onslaught since they launched in November 2014. Less than five years later they’ve launched their own management/artist collective and, just last week, hit their milestone 100th release.

A one track headshot from Barely Royal, Pelikann, Affiliate, Licked! (AKA label owners Marc Ballum and Sam Gibbons pictured above) and MC Purple Velvet Curtains, The Machine comprises all the shades of filth we’ve come to expect from Saucy; gargantuan weight, a fusion of broken beats and a happy slappy 4×4 bassline groove and a reese bass that’s so dank it could melt concrete.

A strictly family affair originally made as an intro for their legendary Boomtown set last year, it captures the label’s energy, darkness and sense of fun. It also sets them up for another relentless sea of gully for the next 100 releases. We called up Marc and Sam to catch the label story so far…

Marc: I won’t lie, it’s been a bit of a slog getting there.

Releases have been relentless since 2014. You guys haven’t stopped. But let’s go further back for a second and see what actually triggered Saucy in the first place…

Marc: I started the brand on my own to begin with. I loved DJing and would throw nights around the Reading area with a couple of mates and a crew called Fusion. That died down, they were all older and grew up. I needed to either give it up or take it a lot more seriously so I thought I’d go for it. I was into early My Nu Leng and a lot of that gritty bassy stuff that was happening around the time and wanted to get more of it out there. I got stuck in and took it from there.

Marc: I dabbled a bit, and still do, but I felt more comfortable as a DJ and found my skills were best placed as a label owner. So yeah around 2014 I was throwing a drum & bass night called Pure FX, we had our own rig and take it to a dingy pub and drop filthy drum & bass. Sam was down there one night, we got chatting and a week later he was on the team.

Sam: I had no idea what that night would lead to. I was just out for a few drinks. At the time I was studying music business and I’ve personally come through songwriting. I was in metal bands when I was younger then got converted to bass music with the whole Skrillex era and moved into more 4×4 bass stuff. We realised we loved the same style and were heading in the same direction and we got to work.

Marc: We clicked straight away and were on the same wavelength, you don’t get that with people very often in life do you? So we soon became business partners and split everything down the middle.

What was the time frame between you meeting and that first release in November 2014?

Sam: It was already two releases deep by the time I came around. Saucy Selections Volume 1 was out when I came along.

That album was a big statement. Saucy’s second release and it was a big V/A album full of people have since gone onto big things.

Marc: I appreciate that. Every Saucy Selection release has done incredibly well actually We’re changing the concept of that series now and developing other ideas. We’re constantly trying to step up and push forward and try new things every year.

Never rest on your laurels or stagnate!

Sam: That’s it. We’re always looking at what we can do better or keep fresh. You have to do it, or you’ll get left behind.

Give me some Saucy level up moments…

Sam: That kicked off on YouTube too because it was used by Faze Clan. That was pretty mental.  think another level up has been setting up the management thing with acts like Pelikann, Barely Royal, Affiliate and things like that. Getting involved in their story has been a turning point, developing things and helping them as artists and setting things up.

Marc: We’d been building the whole family vibe from the start, so it just felt natural to do it and take a step further. I’m really proud of everyone in our team and what everyone does but recently it’s been very exciting and fulfilling to see Pelikann, who’s been with us since the start, getting signed to Circus and taking off. I’m exciting to see that happening with a lot of our artists.

Pelikann sums up the label’s broad melting pot sound. You never know what you’re going to get, beside it being pure filth of some description. You keep us on our toes.

Marc: That’s it mate, that’s exactly what we go for and we have a wide range of tastes. I come from much more filthy sounds in any genre.

Sam: And I come from more of a bass house and tech house stomping ground and I guess we’ve merged the style quite well.

Back to the 100th release. This began in Boomtown last year, right?

Marc: Yeah we all wrote it for our intro track. We had a little vocal sample over it and goes into those reeses. It just kicked off and people were asking about it straight away. It’s had mad support with guys like Skepsis playing heavily since last year. It’s been quality seeing people go crazy to it.

Sam: That’s the vibe we were going for. Barely Royal did that part and he’s really inspired by drum & bass and wanted something epic so it came about that way.

Marc: Yeah man that’s what we’re all about; we want to keep it tight and have a unit and support each other. So everyone on the track is managed by us. It’s a wicked feeling to have done this and for it to be our 100th release.

What comes next though?

Sam: We’ve got an EP from NuBass which is just stupidly good. That’s on the first of April. Then after that we’ve got a treat from Pelikann, bits from Barely Royal with a remix EP the some bits from a guy called Castnowski from Canada who’s sent us this sick collaboration with Flatmate. And that’s just the start of it. We’ve got loads of bits after that but we can’t give too much away for now…