Those lucky to have a ticket for Dimension’s Electric Brixton show this Saturday, October 5, are in for a treat: Dimension has just announced the full spec on his live concept and it’s pretty impressive.

For his debut live performance Dimension will be operating a one-of-a-kind instrument he’s had custom made during the summer by INPLAS, a production company who have previously worked on the likes of Star Wars and Game Of Thrones. It looks like this…

As teased yesterday on his social media, Dimension Live 1.0 is based around a huge glass piano-like structure that weighs in at 100kg and was created using 3D component printing and laser-etching. It comprises a hammer-weighted keyboard, nine custom-made instruments with 162 switches and faders for full control over his stems for full live arranging and remixing, taking us well beyond any Dimension DJ set we’ve had in the past.

“DJing always has a place in my heart but the medium is unavoidably limiting from a performance perspective,” he explains. “It was constraining me, and I felt as though fans were only receiving a small percentage of what I knew was possible. I reached out to the most talented individuals I could find and asked them to help me develop and engineer the true Dimension experience I’ve always wanted to give people.”

The experience doesn’t stop at the glass mechanical structure. It will also include lighting and visual engineers who’ve worked with the likes of Chemical Brothers and Stormzy and have installed a 50-light rig, laser walls and ‘state of the art scent technology’ to release aromas at key points in the performance to heighten or intensify the mood.

While this isn’t a world first (we interviewed a smell DJ years ago on this site) it’s the first time we’ve seen aroma-based tech incorporated into a major headline electronic music act, certainly in drum & bass, and promises to create an immersive atmosphere for an ambitious debut live show. It also adds a whole new dimension to the term ‘stinker’ (not sorry)

Dimension will be joined by an all-star line-up as 1991, Bou, Upgrade and Turno are all in full support. Like we said, if you’re lucky to have a ticket for this Saturday’s show then you’re in for a treat. 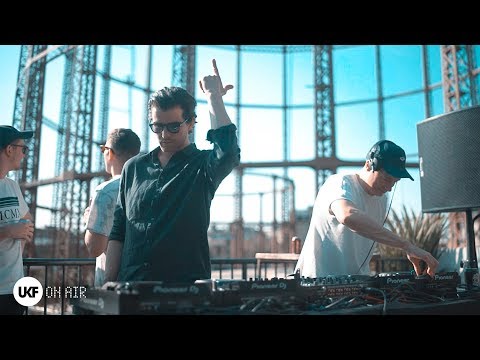