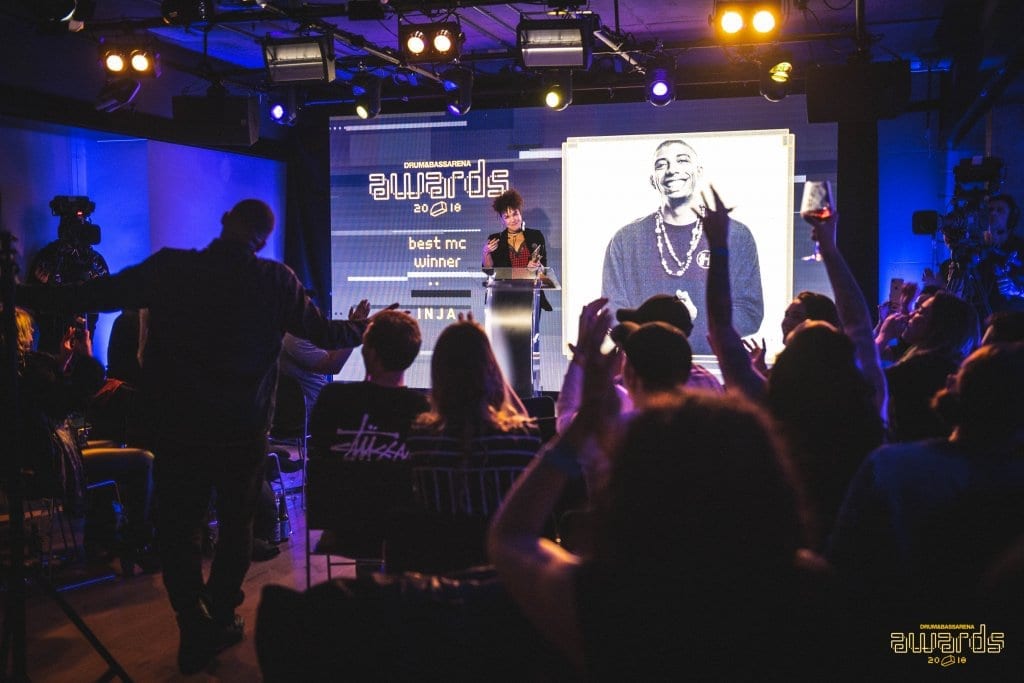 The 10th annual Drum&BassArena Awards was always going to be special…. But no one quite expected what went down last night, December 12, at YouTube space.

As always some of the biggest names in the scene congregated in London in order to celebrate what has been an outstanding year for D&B. But whilst the atmosphere of reflection and celebration was as tip-top as it’s always been, some things certainly changed.

The awards were given a revamped look and format that was tailored much more for the fans at home who voted and made the awards happen. The perfect setting for Jenna G’s signature friendly hosting and the new addition of our own editor Dave Jenkins who was on hand to interview some of the lucky winners and provide running commentary, offering you at home some insight into the hard work and graft that’s been put in all year in studios and DJ booths.

Injected with professionality and a sharp veneer, the awards better reflected the type of music that’s proliferated all year. This was visible best in this year’s winners, with Austrian sensation Mefjus snatching both best album and best producer and came second place for Best Tune, Inja did a similar run himself grabbing both Best Vocalist and Best MC and came second place for Best Video. His pure passion for the music and gratefulness to the fans was amazing to see, as was the appreciation for Mefjus whose album, as he told Dave, took nearly three years to make. That’s what you call hard work.

Like usual, Hospital Records did exceptionally well with five awards under their belt: best club night, best label, best remix thanks to Unglued’s reworking of Hospital classic If We Ever and of course Inja’s well-deserved victories. It’s the 5th year in a row they’ve taken best label and the 7th time they’ve won overall, but as Chris Goss said in the live interview, “it’s been a grind to get here.” Very well deserved on their part.

We can’t talk about labels, though, without mentioning Souped Up. Serum and Benny V’s imprint snatched best newcomer label as well as being nominated for best overall label, a phenomenal achievement that highlights just how far they’ve come in such a short amount of time. Benny V and Serum spoke to Dave and their passion, drive and appreciation was plain to see, not just for how well their music has been received but everything that’s come with it: the humour, the artwork and the general culture. Another really interesting label development was Critical Music scoring second place for Best Label. This meant that, for the first time in the awards history, it was no longer a Hospital / Ram stand-off for the top spot. This will be very interesting to see how this develops in future years.

But the celebration of the music didn’t overshadow a more sombre, important note: remembering those we lost this year. Kat, the wife of Stormin who sadly passed away in February, gave a moving speech celebrating his legacy, whilst Duncan Spirit was given the biggest salute of the night and was rightfully admitted into the Hall of Fame. Everyone who knows how much those two contributed to our music knows just how much that mattered.

Becca Jane Grey took to the stage in a beautiful performance that saw her sing both Lights Cascading by her and Keeno, as well as ‘These Days’ by Bert H. She’s had a fantastic year, so to see Becca up where she belongs was great and another highlight of the night.

Finally, Andy C took home Best DJ for the tenth year in a row – words aren’t needed. He spoke to Dave about his performance at Wembley and how he felt it was a “testament to the scene”, which we couldn’t’ agree with more. It alludes to something that almost every interviewee mentioned – the strength and life that’s permeating every corner of D&B at the moment. Shimon saw the scene as back to being “a melting pot” and we think that sums it up perfectly.

22 years and 10 ceremonies deep… Drum&BassArena continue to celebrate our unique genre at the highest level. We’re looking forward to seeing how this develops in the future years. Here are the full top five results in every category…

Kings Of The Rollers

Hospitality In The Park

If We Ever (Unglued Remix) – High Contrast