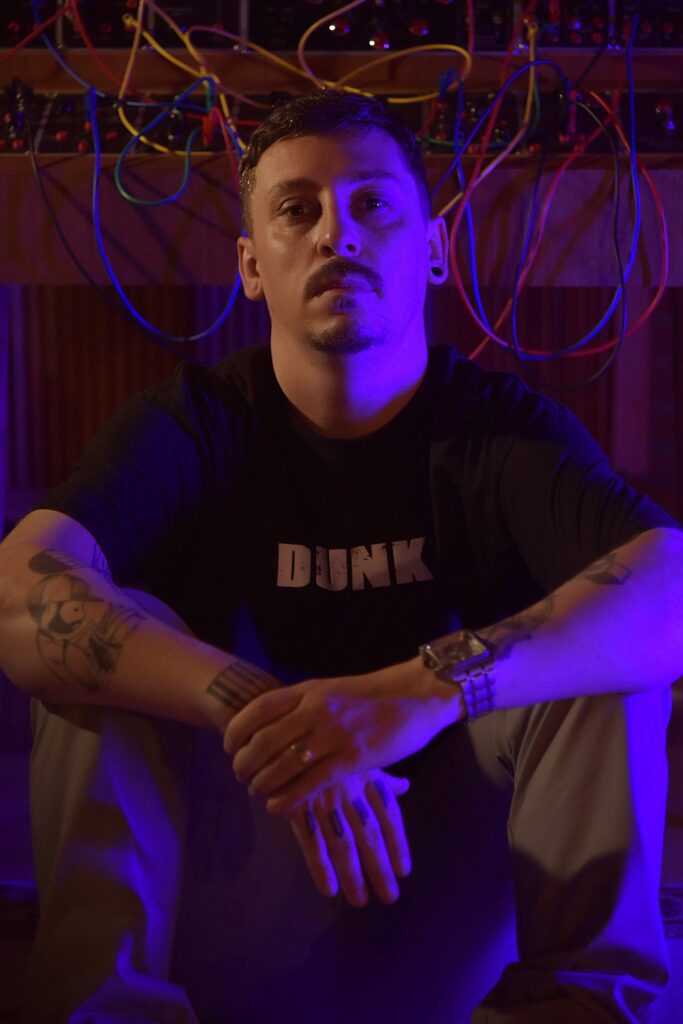 Brazilian artist Dunk has just announced his debut album: The Music Is My Life lands on Dispatch Recordings next week September 17.

The current summit of a very rapid climb up the ranks as a solo artist since departing from the Jam Thieves in 2019, Music Is My Life follows an impressive run of releases, remixes and collaborations on many highly respected labels. Souped Up, Sofa Sound, Dubplate Dread, Liondub International, Grid, Critical and Playaz are just some of the imprints who’ve dished out Dunk’s signature funk this year, as are Dispatch, where his album makes the perfect fit.

Consistent, stylised, no vocals, very stripped back and contemporary but with that classic rolling raw Dispatch grit, Music Is My Life is a stark, dark trip into Dunk’s vision and production process. The title itself hints at how much of an outlet his music has given him during these last few years of pandemic turbulence.

“Music has helped me to have optimistic views on the pandemic,” says Dunk. “Or at least it helped me not to have only negative views, which would possibly lead to depression.”

We can all relate to that. The Music Is My Life is out September 17 via Dispatch directly or Beatport and out everywhere else on October 1. Find out more:

How are you? How’s life in Brazil right now?

I’m fine, thanks man. Firstly, I’m very grateful for this interview! I already had the first dose of the vaccine and, at the moment, we are walking around here already seeing the light at the end of the tunnel. Vaccinated, still with safety measures, believing that this pandemic will finally come to an end.

We’re getting there! How has music helped you during these messed up times?

Totally. So you left Jam Thieves and went solo just before the lockdowns. What influenced that decision? How did you find the transition from a being in a well-established duo to developing yourself as a solo act?

The influence of producing and playing alone came from freedom. I felt the need to be free, to do it 100% my way and not 50%, which usually happens in doubles. At least when it’s honest. As I said, the pandemic enabled me to put my available time in quarantine to work and that was the best thing I did. Producing amazing tunes, preparing my marketing. I’ve come this far and want to go much further. What’s left now is just traveling to play for all of you.

Yes! You’ve worked with a huge array of sick labels since you started the Dunk alias from Souped Up to Dubplate Dread, Formation, Sofa Sound and of course Dispatch. Sounds like you’ve been having a lot of fun in the studio and enjoying experimenting. How’s that been for you?

I felt the need for a change in my life and I made it. I wanted to be free, and I did it. Only that. I believe whatever I do, as long as I do it with love, dedication and I am focused on what I do, I can do it. And I will continue to do that.

Amen. Let’s chat about the album. The Music Is My Life is a flipping great title that so many of us can relate to. Tell us just how much music influences your life, your thoughts, your headspace, your soul…

It’s amazing! It’s the result of my change, it’s the fruit of my change… I wanted something new and it’s really happening, like so many labels and so many releases. This is nothing more than the result of what I sought and dedicated myself with great care to make it happen. Music is everything.

Also, my family has always been musical, we listen to music at home or in the car and since I was very young I have defined my taste. Later I started to work with this, something I believe is a gift, which I’m very grateful for.

Through music I have got to know many amazing places, countries and people who are dear friends now. I don’t live without music, I can’t imagine myself doing anything else and, talking to Ant, he gave me total freedom and support for this to be the name of the album..

The album flows like a DJ set in a way and has those cool interludes breaking up the heavy grooves. Did you have a concept in mind when creating the album?

It took months of work and the tracks were selected by myself and Ant. I definitely worked to make an album that’s very personal. My creation process is more touched when I’m at home with my wife and my cats. I would like to convey that in my songs, which they all were well inspired by this.

You never a second chance to release a debut album. What are the most important things you want this album to say?

The very last interlude God Is Love leaves us wanting more… Like you’re setting us up for the next chapter of Dunk! Tell us what comes next…

I like to surprise you guys! But let’s just say that there are a lot of good things coming out very soon! Something I always say is that I’m very happy to work with my idols. Thanks everyone for the support so far, there is a lot more to come!

Dunk – The Music Is My Life is out September 17 on Dispatch Recordings.

Pre-order now and get Utopia and Mambo on instant download