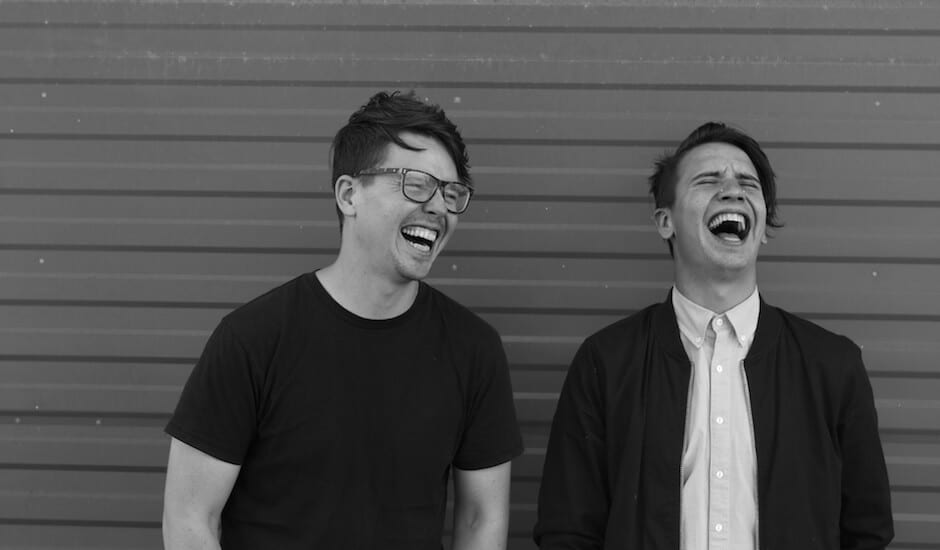 Their signing is marked by the release of their latest single Exotic Robotics. A powerful fully thrusting banger inspired by the idea of a robot strip club (standard) it follows a fine line of pearly damagers this year including Luddites with fellow Viper compadre Trei, Combat and a dreamy little number called Long Summer on Liquicity.

They’ve told us we should expect something “a little different” at the end of the month, too.

Currently romping across Europe for the summer, playing at the like Liquicity and Let It Roll, we had a few words with brothers Jonno and Jeff to find out more.

How’s Europe been for you this summer? We’ve had some decent weather to show off this year!

Europe has been amazing, we stopped in through London for a day before heading off to the Netherlands for Liquicity Festival and to hang out for a week but now we are back in London, prepping for the Egg show tonight, dusting off our Let it Roll Hangover. Weather has been insane, everyone thinks because we are Australians we are used to it but when its hot and the air is thick we crave a beer in the sun and sweat just like everybody else.

Tell us the highs, the lows, the sights, the sounds, the strange foods…

Don’t think there has been any lows yet, probably a few dusty mornings but certainly a high has been the shows. Playing two different sets at Liquicity was awesome, two different crowds and vibes. The Festival was incredible; the party in the silent disco at the end was amazing. Absolutely hilarious to take off your headphones and hear 1000 people singing a Macky Gee tune with no music!

We have spent more time in the Netherlands this year, seeing more places and taking our time. It’s a beautiful country with amazing people – could be one of our favourites in the world. Seeing some of the smaller towns this time around has been a highlight. Visiting Lidl with Etherwood and Joe from Soulvent was also great. So many strange items including the off brand Bugle, Snuggles and a Mexican beer called Argus.  Nothing like an Argus and some Snuggles in the sun!

You were over these ends last summer too. Is this an annual pilgrimage now?

It seems like it haha. As we build our profile outside of Australia we get more opportunities to come over and we always try and add a few weeks in there to see friends, do some music work with locals and visit some strange towns. We have even been doing some research into moving over so it might be more of a permanent thing next time we come back.

Obviously congratulations on signing to Viper. This has been a long time coming, right? You guys and Viper have been true blue for quite some time…

Haha true blue, I guess we can except more of these Austrliainisms from now on! We met Brendan Futurebound a few years ago at a festival in Bali,  our buddy ShockOne introduced us. That began a relationship that consisted of sending demos, getting our production up to scratch and getting to know the Viper family every time they visited Perth. Its pretty important to us to work with people we get along with. We value personal relationships and we feel we have cultivated one with Viper. Being able to speak honestly and openly when it comes to creative/business decisions is integral to a successful working relationship and it makes the entire creative process a lot easier.

It kicks off with Exotic Robotics. Besides rolling off the tongue with a lovely poetic aesthetic, it’s a pretty gnarly tune. How did it come to be?

Often we think of the song title pretty early on to give us narrative to work within. A space for the song to exist. For Exotic Robotics we envisaged a robot strip club in the future (couldn’t tell you why) then we wrote some sounds that felt like they represented the gyrating fembot automatons that would work there. The song went through multiple incarnations before we locked in on the triplet groove and combination of sounds that were just the right amount of obnoxious. Hopefully the final tune gets people moving but no one bangs their fax machine.

In fact you guys in are in beast mode this year. Luddites, Combat, now Exotic Robotics… 2018 is the year of Ekko & Sidetrack no nonsense heavy bangers. Tell us about this.

After putting out Long Summer with Liquicity it felt like the right time to finish some of the heavier ideas we had been playing around with. So far we’ve had great responses from other DJs on Combat and hope Exotic Robotics will get the same response. We tend to write a few different things at once so now we have some more musical numbers to finish and share with the world over the coming months. That said we have a few other Bangers we’ve been testing recently, so now we will work with Viper to see which releases work best together.

Now please tell us about what’s coming up next. When a label signing happens, the little pitter patter of tiny album feet can usually be heard thereafter. Baby shower?

Haha we don’t want to rush into an album – We are only just being introduced to a wider audience and really want to make an impact with some strong consistent releases. An album has to feel like a cohesive body of work and while we have obviously fantasized how an album by us would sound ever since we first started producing we want to wait to the right moment to start and have a clear vision of how we want to present it. I think people can expect more music from us that shows our range, a few collabs with some exciting artists and probably an EP towards the end of the year.

What else does the world need to know about Ekko & Sidetrack in general right now?

Jono’s hair is getting really long and it might need a trim soon, so if you know a great barber in London that would love to work with his locks please get in touch. In all seriousness though we are in Europe for another month and find this place super inspiring so we feel like anything could happen, Our Instagram stories normally get more interesting when we are on holiday so check in there if you are interested.  Also keep an eye out for something coming at the end of the month that’s a little different from us and check our weekly podcast The Adventures of Ekko & Sidetrack which you can grab on itunes or any podcast app for all manner of silliness.