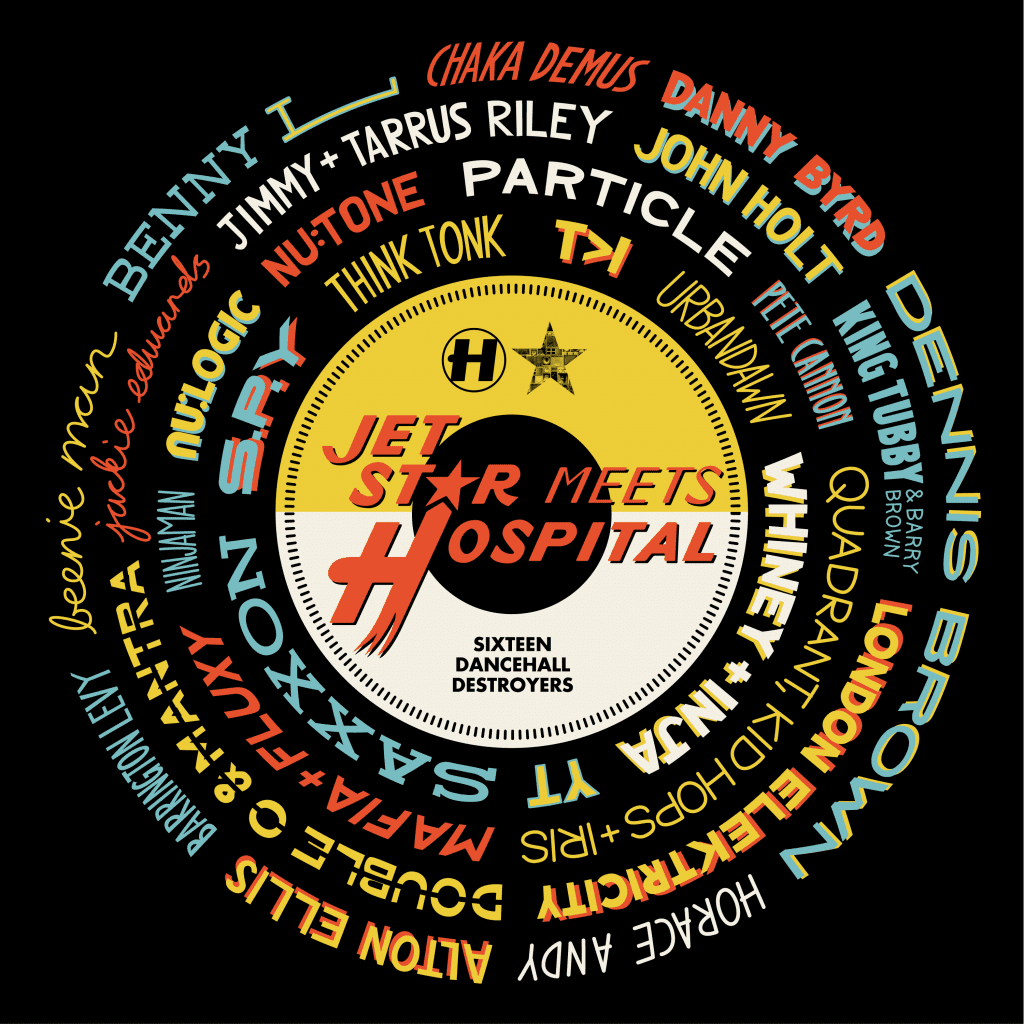 It’s the album that gave D&B a seminal anthem a whole year before it was released: Jet Star Meets Hospital Records.

A collaboration with one the most prolific reggae importers to the UK during the 80s / early 90s, the album reinforces some of drum & bass jungle’s strongest musical roots. And it does so with 16 heavyweight updates on reggae and dancehall classics by the likes of Horace Andy, Barrington Levy, Ninjaman, King Tubby, YT, Chaka Demus, Alton Ellis and, of course, everyone’s favourite chopper-spotter John Holt. Remixers on board for this full-circle celebration, meanwhile, include Saxxon, London Elektricity, S.P.Y, Danny Byrd, Nu:logic, Whiney & Inja, T>I, Urbandawn, Think Tonk, Particle and Pete Cannon.

The system-slapping results speak for themselves and the timing’s canny, too; there’s no better season for reggae than summer and in this current revitalised interest in the original jungle sound, there’s no better time for a rootsical investigation. Two years in the making and more copyright learning curves than Hospital has ever experienced, it seems Police In Helicopter is only the first chapter of this story. Label co-founder and project lead A&R Chris Goss and some of the artists involved explain more…

“Reggae and its subgenres were, and still are, huge in Brazil, so it was great growing up with a lot of it playing around in the neighbourhood, high school and on the radio. Of course, a lot of the Jet Star classics were big hits around here so it’s a huge honour being part of such an amazing project like this.” – Urbandawn

This is a pretty significant label collaboration. How did it come about?

It came about through an industry conference here in London two years ago. It was as simple as their publishers asking ‘do you know about Jet Star?’ And of course we did. For people of my generation, especially growing up in London, Jet Star was a touchstone brand that introduced so many of us to reggae in its broadest form. They asked if we were up for a remix project and we jumped at the chance. Not only because we love the music and it’s a great opportunity for our artists, but because, as anyone who is into jungle and drum & bass will tell you, these roots are the foundation to our world.

The timing couldn’t be better with a lot of appreciation of the original jungle sounds and influences right now. Could you foresee that two years ago?

From my point of view I’m always looking for new ideas, new territory and fresh opportunities for our artists and catalogue. To be honest, I had no notion that jungle would be hot again in two years. I just want us to push into different places, different sounds, catalogues, listeners and expand our artists’ remit. We did the same with the Enter Shikari release a few years ago and they’re exciting projects where we’re able to do something unique, and work with different people. We were lucky the guys at Jet Star and Phoenix Music Publishing came to us with this. It took a long time; I wanted the album to drop last September but we’re dealing with a deep catalogue, there are so many people involved, plus various copyrights, family estates, performers and writers. It’s been a huge learning curve.

“First off thanks to Hospital and Jet Star for including us in this opportunity, it was great to get back in the studio with Kid Hops doing work for one of our favourite labels. It was a fun process combining the best bits of reggae with DnB. The project really challenged us as producers to create a remix from essentially no stems. Initially, we’d tried to force the tune into the typical rollers we’re more known for but that didn’t work out so hot. Once we turned it into a stepper the whole thing sort of came together. We’re really happy with the remix and hope people enjoy it, thankfully Benny L already smashed all records with his remix which took a lot of pressure off us!” – Quadrant & Iris

I guess old tracks like that don’t have remix stems?

Exactly. These originals come with remix parts, it’s often just an MP3 or a dusty old record. It’s been a privilege and a fascinating project, learning how to lovingly, respectfully and creatively work with such a significant, heritage catalogue, and hopefully introduce it to a lot of new listeners who won’t know the originals.

How did you work out who remixed what?

Well, selecting Hospital artists was my first priority because the project is “Jet Star Meets Hospital”. But then there are touring schedules, solo releases, albums projects and many other things to negotiate, so it was a perfect opportunity to reach out to a range of other producers who I believed would do a great job, and had a pedigree for reggae-based drum & bass. As a label we’ve always believed in shining a light on up-and-coming acts in the drum & bass scene who are making exciting, forward-thinking music.

Obviously Police In Helicopter came from this project. Were you banking on such a hit so early on?

Benny’s a great example of working with new artists. He was immediately up for the remix and, Benny being Benny, he turned it around pretty quick. It didn’t need much A&R at all – it was nailed. But within a month he’d given a copy to Randall, and from there word spread very quickly. Voltage was begging for it. And in the time-honoured dubplate tradition, it blew up in weeks. I’ll confess I thought this was all happening too quickly: the album wasn’t ready, and maybe the hype was too fast.

But in many respects, this was a perfect storm. It’s a drum & bass remix of a reggae classic, and both of those worlds are built on the phenomenon and history of dubplate culture. We sat tightly for as long as we could, but by Winter we knew we couldn’t hold it down, so chatted to Benny and committed it to Sick Music 2019. It was amazing and very fulfilling to see it explode in such a big way, and become the first ever drum & bass number one on all of Beatport. We were all, and still are, very proud about that achievement. I realised we’d have to be patient to finally start telling people about the Jet Star project and to actually explain Helicopter wasn’t a bootleg as so many folks thought, and that this wasn’t a one-off. It’s a huge project we’ve been working on for two years.

“It was great to be part of this project! In fact the track I remixed – Ninjaman – Murder Dem – I had actually been thinking of doing a bootleg for my sets for a while, so do it officially was amazing. It’s been getting a great reaction every time I play it out and both MC IC3 and Carasel always ask me ‘what’s this??’ Hopefully this won’t be the last of two iconic labels remixing their back catalogue for the 2019 dancefloors!”  –Danny Byrd

Jet Star did some Tuff City-released hip hop collections, too… Do you think there’s potential for another album? Hip-hop is just as much of a influence in drum & bass as reggae.

Who knows? What I‘d love as co-founder of the label is to constantly take Hospital to new musical territories and different contexts. Whether it’s hip-hop or techno or house or contemporary classical. There’s no end of fascinating genres that have contributed to this beautiful melting pot of drum & bass which we could possibly develop into projects like this. My problem is getting carried away thinking through these ideas and then getting ahead of myself!

For now though, I’m so proud that there are such legendary names on our catalogue like Barrington Levy, Chaka Demus, and John Holt. These are the voices I grew up listening to, and it’s so rewarding to be in that space now as a grown-up music company. People often ask what kind of a business plan we wrote for the label and I’ve never come across a business plan in my life! I know it’s the same for many artists who’ve built labels and developed their brand – we just wanted an outlet for our music. But with years of hard work and real graft you find yourself developing artists’ careers, and your ambitions and your catalogue continue to grow. It’s been expanding for 23 years now and we have every intention to continue for another 23…. and who knows what beyond. It’s amazing to be part of that culture. I’ve never wanted to do anything else.

“Remixing a track from one of the most legendary reggae imprints in the world wasn’t easy. Chris suggested Inja and I take it on together and when Inj sent the vocals back we knew we were onto something. I can’t wait for people to hear this!” – Whiney