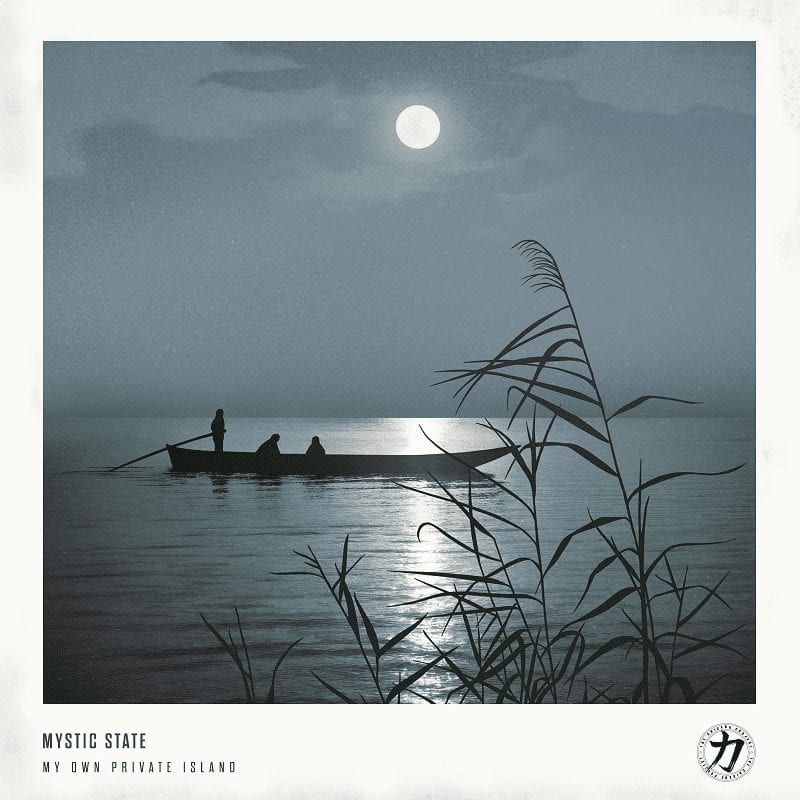 Despite a global pandemic, complete club shutdown and several thousand miles between them, south west duo Mystic State are another rare act to defy the curse of the 2020s with their most ambitious body of work to date: My Own Private Island.

Four years in the making, and a concept built up around a sample and idea they began working with in their earliest incarnations four years ago, My Own Private Island is the sound of an act capturing their sound and understanding who they are.

Known for their 140 BPM excursions and explorations just as much as their drum & bass – recently on J:Kenzo’s Artikal and consistently on their own label Chikara Project – the album flips expectations and sees them going back to their D&B roots while exploring the many shades, styles and textures they’re best known for.

From heavy rollers to beatless moments of ambient bliss, all tied down with a strong emotional theme that runs throughout, it’s a proper album’s album; a seamless listening experience, delivered in a way that makes total sense in the current can’t-go-raving climate… Even though it was finished and ready to roll out several month before lockdown kicked off.

They may have defied the curse of 2020s, but that’s not to say it hasn’t been a hell of a lot of hard work over the last four years, with its own challenges. The album is out on Friday September 4 and comes complete with some very tasty vinyl options. We called them up to find out more.

The last time you were interviewed on here was 2017. We spoke about the accidental debut ‘album’. In hindsight that was just a big fat co-lab EP. My Own Private Island is your proper debut album and it was definitely no accident was it?

Will: Yeah, exactly. It’s definitely our debut album and we’ve spent forever on this. We started literally with one track, the title track actually, and that was over four years ago when we first started Mystic State.

Wow. Cool. So this goes right the way back to the start of Mystic State? There’s got to be a story behind that title….

Will: It’s in regard in regard to the vocal sample. It’s a bit bait saying where the sample is from but it’s a well known movie and the female lead is saying she wants her own private island.

Mike: When we watched it, we were both like ‘that’s fucking nice!’

Will: We debated over whether or not to use it because it’s such a beloved film but it opened up the concept for us and ever since then, this has really been about encapsulating our sound and digging deep you know?

Yeah, I was gonna say, this is the sound of you guys really finding out and expressing what Mystic State is all about, in the most cohesive and ambitious way. This is really you both laying your soul on the table.

Mike: Yeah, that’s exactly what it is man.

Will: When the album was nearing completion, about the time I moved over to North America, I was just starting to feel confident that we did have a sound that people could pick up and pick out from other tunes. And the whole album has the sound running through it, which is exactly what we wanted.

Mike: It’s interesting because our sound went off in the 140 direction, and still does, so I think a lot of people are going to be surprised as no slower tempos,

Will: I don’t think tempo even really matters in this body of work. It’s just, you know, it’s just our sound.  We’re gonna pick up on the 140 later but it’s good to get back to the roots almost.

But in a broad and diverse way. My two persies are Mirror’s Edge, which is a banger, and Audition, which is on an autonomic tip. They’re miles apart but work in the same way as part of something bigger.

Mike: Yeah, exactly. We thought it was important to have a full range of sounds on there. And the dancefloor ones were written more recently as well. At first this project was much more autonomic and ambient-infused stuff but we know it’s kind of important to have some tracks that will pop on there, too.

Will: But right now everyone’s much more of an armchair listener so the dancefloor ones need to also work in that context. Even though Mirror’s Edge, in particular, is very dancefloor oriented, it still works with the other ones.

Yeah, definitely. The album goes in quite hard within two or three tracks. Some of the heaviest moments.

Will: Yeah, one of my friends used to say ‘start off dark and then let the lightness in gradually’. This was related to DJ sets, but I thought it could actually translate to an album. The intro tracks Expectations gets you warmed up then straight into the darker, more gripping stuff and then back out again.

Mike: The dynamic of the album is that it all has those dark undertones. Within the ambience and everything, they all go hard essentially.

It’s interesting you say that the harder trackers were done more recently. Maybe during lockdown?

Will: It was finished long before lockdown. We had the album ready to press on vinyl then the plant just fucking dipped with our money. We had this shit ready to go around my birthday in January. Well over six months later and we’re finally ready. Everything seems to have worked a lot better now. But yeah, it’s been ready for a while.

Mike: The only influence lockdown has had on it is that we’re not being able to get any shows off the back of it.

Will: We had shows planned out that never went down. We didn’t know about releasing it while on lockdown but I think patience has paid off and made sure we did things right…

I spoke to a lot of people like Degs and GLXY about releasing an album during these weird times. People are digested music differently. You referred to armchair listeners earlier and people have got more time people working from home. I think albums like yours will resonate with people because it has that quality that people are more interested in while they’re not raving. It’s not just about throwaway bangers anymore, basically.

Will: Maybe this is a good thing and the shelf life of releases will actually be longer than fucking two days! People do have time to go back and listen again. And they’ve got time to sit through an album. These are all silver linings of the time, I guess.

And we rise to challenges. You guys have in yourselves really – having to change how you work to operate as a transatlantic duo. Making sure you’ve got a good shorthand, good communication and a good workflow. That’s quite a big challenge.

Will: It’s an interesting one, because I never actually felt that far away. We chat most days and I think the music keeps us connected. We’ve been writing a lot more music since I’ve been over here. I think it got to a stage when we were both living in Bristol where we knew that we could make music at any point so we didn’t actually get that much done. We were hitting Pirate Studios every maybe once a week or two weeks. Now we’re working all the time.

Mike: It’s also influences and what we share in our lives. It comes together in a different way.

That’s interesting with the influences. You’re both in each other’s pockets, you’re doing the same thing, seeing the same people, going to the same shows, hearing the same tunes… You’re not bringing as many different flavours to the mix individually are you?

Will: Exactly. I was getting quite stale with everything in the south west and wasn’t feeling that creative until I came out here. It took a couple of months for me to get into the swing of it. Then I went to Bass Coast, which is like a really big festival over here in Canada, and after that I was just like ‘Right! We need to fucking finish the album!’ It was basically that kick we needed…

You guys are probably sitting on quite a lot of new stuff now!

Mike: Mate we’ve got so much to be honest with you! It’s been great working on Artikal while we were waiting for the album to drop. And also have a chance to try new things and be more experimental.

Will: We’re gonna do another project for J:Kenzo. We also want to push just more D&B on the Chikara Project as well as the 140 stuff. We’re going to be working with Hold Tight records and Mike runs a label called the Moth Club, which is very dub techno flavoured, and we’re going to be working on that as well. So a lot of things we’ll be doing in-house except for Jay who we have a lot of time and respect for. It’s good to have that balance.

Will: He’s such a rarity. It does confuse me how he balances everything so well. Like, okay, you’re running the label, you’re doing your radio show, you’re playing out all the time. He’s got a family. He keeps it all very balanced and I just get stressed out thinking about Mystic State! He’s an inspiration. Like in terms of how to be a human being.

Amen! I have one more question… If you had your own private island, where would it be in the world? And what would you do there?

Mike: Somewhere off the coast of Anglesey, an island with beautiful wooden structure with a state of the art studio and not speak to anyone ever apart from Will. Eat good seafood and yeah, just be content.

Will: Mine would be off Vancouver Island, just off the coast of British Columbia and I’d just mountain bike and live off the land. I’m not sure what the land is best for up there but self-sufficiency for sure. A man can dream….