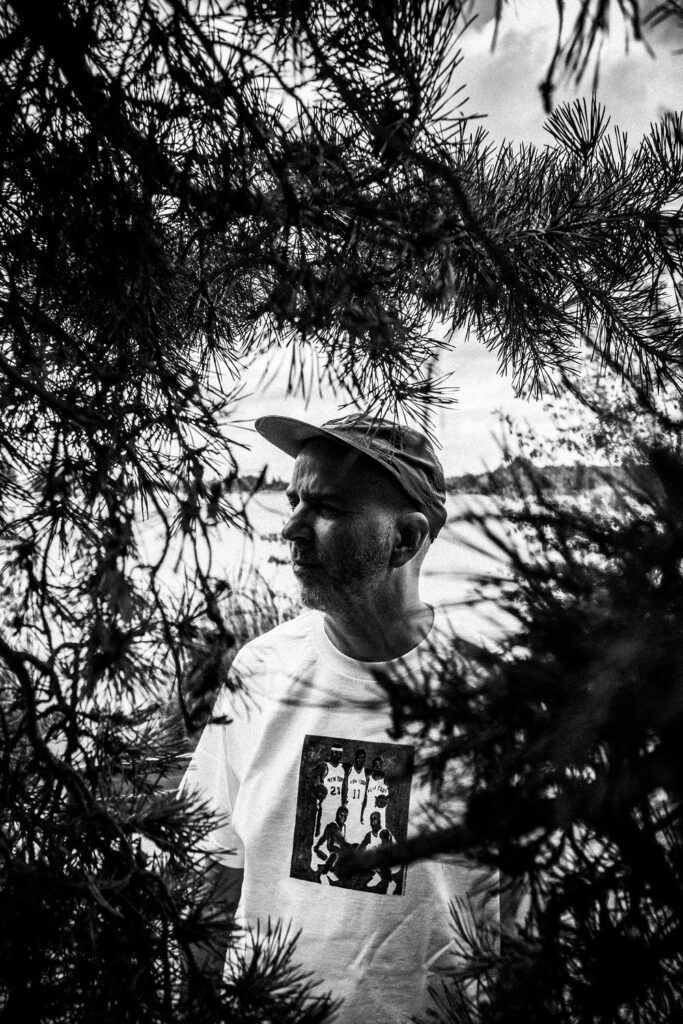 Inspired by the 90s sports aesthetic and motivated by community, unity, social activism and real artistic value and merit, Five Alley launched Friday September 24 with a two releases: a collaborative EP from Redeyes featuring DRS, Lenzman, [ K S R ] and Monty entitled This Must Be The Place and a cassette-only beat tape from Redeyes entitled Good Things Take Time.

A long time in the making, Five Alley’s musical remit is as rich, wide and soulful as you’d expect from the longstanding French artist plus 20% of profits will go towards a cause close to the collective’s hearts. For the first release funds will go to Vérité & Justice 31, a Toulouse-based organisation who fight police violence and systematic racism. With an equally ethical approach to sourcing and producing merchandise and an approach that puts the artist first, we asked the collective for some more information. Alley oop!

How has your summer in Toulouse been? Are you back to normal a bit now?

Life is slowly coming back in Toulouse and it felt good. Such a lovely place in summer, we had a few outdoors events which allowed us to see friends we hadn’t seen in a while, and now everything is opening up again, we hope it keeps getting better and better.

So… Five Alley. Tell us about the concept and basketball themes – this is about teamwork and unity isn’t it?

Exactly, Five Alley is deeply inspired from 90s sports aesthetic (basketball courts, baseball logos…) and what makes the beauty of these sports: unity, teamwork, using everyone’s skills and passion and devotion to build something collectively. It’s not about success or winning but it’s about the journey, the struggles, the things we create as a whole.

Five Alley seems much more than a standard label. There’s a strong social message behind the project and there’s a real focus on special physical products isn’t there?

We really believe in taking our time to do things right, hence Good Things Take Time! Everything in this world is lead by deadlines, accelerating all the processes, decaying productivity… And all of this is leading us in the wrong direction, people burn out and even the planet can’t take it anymore. All of us three are really concerned about social justice and the environment. We didn’t force anything with this label, everything we do feels right for us: making ethical and organic merch, working with charities that fight social issues like racism or systemic violence… As for the concept of the hip hop beat tape, the music will only be available with this format, because we want it to be exclusive and unique. Everybody can have access so easily to all the music in the world now on the Internet and streaming apps. It’s been a real challenge to create this tape. Redeyes did it all on his own, from the concept to the music, mastering, artwork, recording the tapes one by one… And it feels right that the people who are going to listen to it may have to challenge themselves to have a proper listen.

You’re also working with local artists for merch too aren’t you?

Our designer Loofi lives in Caen (which on the other side of the country for us) but we met him through Toulouse collective Egregore, who we know share the same values as us. We’re also working with a French company for the production of merch, who are really concerned about ethics and the environment: the use only 100 % organic cotton and green and safe inks. We were very meticulous in choosing the businesses we were going to work for, we studied their ideals, retraced the origin of their materials and calculated their production impact on the planet.

How important is the sense of location to Five Alley? There’s a strong sense of Toulouse energy to this project. Will this be present in all Five Alley releases?

Toulouse is still a small town and really got this good positive energy , and Tom is really connected to all the different underground music organisations here like Egregore and Folklore. Most of the D&B people here are like family. It’s been nice to have Monty involved and we hope to work with Visages or others from here in the future. It’s easy for us to work with close friends, but we are open to the world, and we will work with anyone who shares our values and wants to be involved in our adventure. We’re also not closed off to other music genres, we don’t want to diffuse exclusively drum & bass. Redeyes’ music is deeply rooted in hip hop and jazz, so it gives you an idea of the aesthetic we’re going for, but at the same time we want to get out of our comfort zone and experiment with other bass music styles and sonorities.

Tell us about this launch release. Some big names alongside Redeyes – DRS, Lenzman, Monty, [ K S R ] – how long have these tracks been in development and how did it all come together?

It took a long time, Redeyes had been working on it since after his Selfportraits album, but the idea of a label was floating in his mind for a while and many demos were explored in the last couple of years until those four tracks, that sounded like the right ones. Having Lenzman on here was such a pleasure, he’d been working closely with Redeyes the last five years on TNQ and he’s been really helpful with Five Alley. Monty has also been very involved in building the label up by helping mixing tracks, and we are really happy about the track they made with [ K S R ]. And DRS has been such an inspiration, the charity hip-hop project he made in collaboration with Redeyes Coloured really showed us the way for what we’re doing now, so it felt right to have him on the first EP.

What’s coming up next?

We are just brainstorming it for now, looking for new ideas, new artists and new charity associations to work with. We want to make something unique for every release. It took us one year to get this one ready, so it may take a little while before the second one. You know, we live in the south, so it’s customary to take our time down there!

What else does the world need to know about Five Alley right now?

We are Eva, Tom and Julien, we love drum and bass and any kind of music that can touch your soul and your heart. We are doing our own thing, we love to be different, and we hope you’re gonna enjoy our music and support the causes we defend. Peace!

Who The Hell Is Yours Truly?
WORDS
49 shares