Strength in numbers: the last few years in drum & bass have been characterised by many things – more acts going independent and setting up their own labels, the rise in dubplate culture and seismic audio headbutt of the current jump up and jungle renaissances – but few developments have been quite as exciting or enduring as the return of crews and collectives.

Once a major distinguishing hallmark of the genre (Bad Company, Ram Trilogy, the Virus camp, the Renegade Hardware camp etc) crews have once again become a dominant voice in drum & bass. From Kings Of The Rollers to SaSaSaS by way of Shadow Demon, Standard Procedure, TNA and many many more, squads and collectives have been leading from the front for several years now.

One of the youngest crews to emerge in recent times, they’ve already made an impressive noise. Launched summer 2018 (with a sold out event in K Motionz hometown Birmingham) and fronted by OG host MC IC3, so far they’ve only done a choice selection of events and released two tracks, Earthquake earlier this year and, most recently, the hooky hurricane that is Stay. This, they tell us, is only the beginning. If you’re lucky enough to be heading to Rampage later this month, you’ll be the first to experience the next chapter in the Distress Signal story. If not, wait for the set to drop online. We called up the trio for their first ever collective interview, this is what we found out…

Let’s go back to the start… How did Distress Signal come about?

K Motionz: I got approached to set up a bit of a collective and these guys were the most natural option.

Kanine: It made sense. We’re on a lot of the same line ups, have played together and toured Belgium and Austria and places like that together. We were playing back to back in some formation  most weekends so it made sense to come together and create something bigger.

But you had to have that personal connection, right? If you haven’t got that, it won’t work…

Simula: Totally. That’s the most important thing. We’re mates, we have a laugh together and share similar opinions and views on how we do things. That’s what makes it work.

Didn’t the name Distress Signal come from a name of one of your tunes Simula?

Kanine: We had a few ideas in mind and threw a lot things around, but we kept coming back to some feedback we’d had from a fan saying our music sounded post-apocalyptic and Distress Signal really fit that.

Simula: I did have a tune with that name though, so yeah there’s a connection there.

K Motionz: We actually had another name in mind for a while. But looking back it was cheesy as fuck.

What was cool about when you announced the launch was the reactions from a lot of DJs. Darkzy said you were the best boy band ever and Brockie said this was next level. That’s a great snapshot of the diversity of support there…

Kanine: Yeah I think that’s a refection of the music we make. None of us are known for just one sound.

Simula: We’re all pretty diverse and bring different things to the tracks and cover the full circle.

So far we’ve had two tunes… Are they done in real life or online due to schedules and locations?

K Motionz: Those two live quite close but I’m two and a half hours away so it’s not always possible to do them in the same studio. Me and Simi have done some tunes over skype sessions.

Kanine: We link up when we can if we’re all in the same city. Every couple of months or so.

But if you’re booked then it’s guaranteed to be all three of you, right?

Kanine: Always. And we’ve also got IC3 on the team. He’s a busy MC so not always available, but he’s our host at as many shows as possible.

Take time to big up the mighty IC3!

Simula: He’s the best host MC in the game. We knew we wanted him when we started.

Kanine: He knows all the tunes, he’s such a sick host, a set with him always kicks off.

You need a host when you’ve got so much going on. Like Kings Of The Rollers have Inja… Hosts guide people through the madness and help them understand what’s going on!

Kanine: Definitely. Especially because most of what we’re playing is on dub. Tracks we’ve been making together or personally. You need a good host style MC who gets that.

So do you all turn up to gigs packing secret persy bombs to outdo each other?

Kanine: It’s a really heathy thing, I think. Any time artists get together and work on something between them knowledge is shared. Every collaboration you do, you learn something and everyone benefits from it… We do as artists, the music fans do because there’s a new act or project and new releases.

Simula: Strength in numbers! It pushes the scene forward.

Kanine: There’s a few tracks ready now. Quite a few. We’re not quite ready to announce how they’re dropping. It’s something a bit different…

One of those ‘watch this space’ things eh?

Kanine: For now, but not for long…

Is it quite hard aligning your schedules to work together?

K Motionz: Sometimes. Personally if I’ve had a busy weekend of gigs then Monday and Tues I have no life, I’m just recovering. Then I’m back on it on Wednesday. Fergus (Kanine) is always on it though, he never seems to stop.

Soldier. What ese does the word need to know about Distress Signal right now?

Kanine: We’re really excited to play Rampage. When that set goes up on YouTube people will see what Distress Signal is truly all about

Kanine: You could say that, yeah haha.

I guess if you all play together then these bookings will always be on the more massive end of the spectrum? Your Westfests, your Rampages, your Let It Rolls..

Simula: Westfest was one of our best gigs in my opinion. That went off.

Kanine: Yeah that was a legendary show.

Wasn’t it one of your first?

K Motionz: It was pretty early on in our formation but the first was DNB Collective in Birmingham. I think that was pretty much sold out and that was a really sick show. It was a great way to start things off. Especially as we had no tunes out as Distress Signal.

That validates things, right? You know you’re onto something…

K Motionz: It was really sick. The atmosphere and everything. It felt like we were doing the right thing.

Kanine: Especially as we hadn’t even announced any music, let alone release it. For the whole club to be that busy and for that vibe to be there… Yeah, it set us up as we mean to go on. But trust me, we’re only warming up…

Distress Signal – Stay is out now 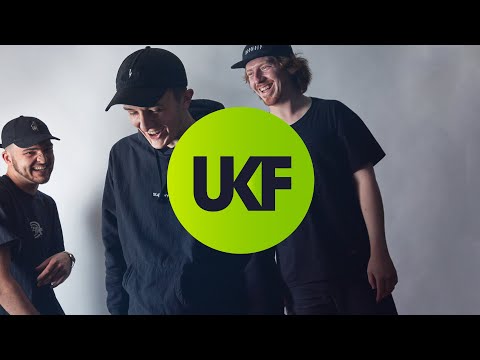 Halogenix is raising money for vital causes with his new edits series
NEWS
22 shares
SIGN UP NOW & STAY LOCKED!Sign up to our newsletter to keep up to date with the latest streams, news, and events, all tailored to you.