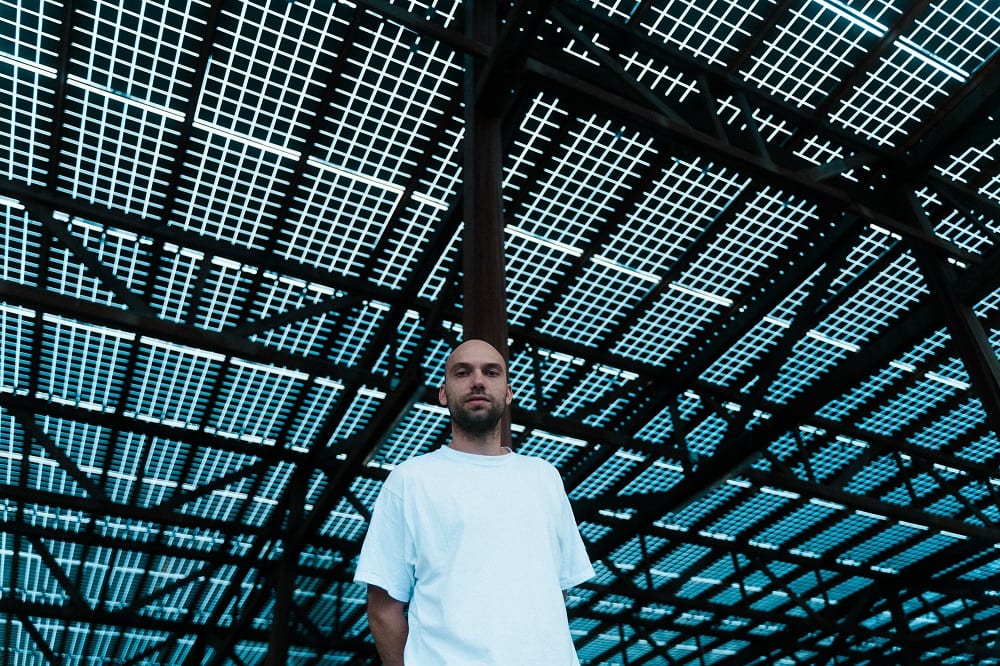 Electronic music has often looked to the cosmos for inspiration. Themes, tropes and illustrations of futurism, space travel, alien lifeforms and worlds beyond our own have characterised many of your favourite records from Alien Girl to Asteroids. But for Dutch beatmaker Subp Yao, space just wasn’t the place.

A longstanding banger merchant who came through in that early 2010s wave of uncategorisable, hip-hop influenced freeform bass that was championed and cultivated by labels such as Saturate! and Inspected, Subp Yao has always taken his inspirations from places and energies much closer to home… The dancefloor, friends, travel. And, in recent years, the ocean.

Moved by the ever-increasing news of irreparable damage to our oceans, Subp Yao (real name Gert-Jan van Stiphout) began to research more about the often alien-seeming worlds under the sea. The trenches deeper than any mountains we have above sea level. The weird-ass looking creatures, much stranger than anything we see in movies above sea level. The paradox that in a deep pressure scenario, there’s actually a lot more room to breathe.

Immersed in this concept for the last two years – sadly losing some close friends along the way – Gert has finally arrived at Infra Aqual. Released on YUKU, it’s an album that seems tailor-made for an isolated year like 2020. Featuring d00p and Warrior Queen, it’s deep, complex and prone to off-piste adventures. Littered with uncategorisable bass elements from fractured jungle to blissful almost pop-like charm, one minute you’re 20,000 leagues deep, rolling with the murkiest monsters on the sea bed, the next you’re floating to the surface, gently ebbing and flowing to the light. At all times you’re immersed in a deeply considered world that never loses sight of its concept or inspiration. The concept of mankind’s relationship with nature expands even more with the latest video, released this week, for new single Shimmer.

One of a handful of genuinely remarkable electronic albums released this month (alongside the likes of Krust’s The Edge Of Everything and Need For Mirrors’ Flames) Infra Aqual is the perfect soundtrack for the darker months ahead. We donned our diving gear and called Gert up…

Have you ever been scuba diving?

No. I wish! I’m not even living close to the ocean. I should have done it last time I was in China but I’m three hours away from the sea. I miss the water in the city. There’s not even a river here. All my favourite cities have water in them. It gives them a special feeling. But I don’t have that where I live.

Is this what triggered your interest in the water?

Yeah totally, also all my travelling and flying over the sea. But what mainly triggered it was a video I saw about the pollution of the oceans and it’s so, so sad. Devastating. From that I’ve become obsessed with the sea and every creature on it. Many of them look like they aliens. It’s funny; many producers are influenced by space but that’s never done it for me. But the water? There are still places in the ocean we’ve never discovered. That’s crazy! Why explore somewhere in space when we haven’t explored all of this planet?

Yeah, like completing a game without finding any easter eggs or completing the side games…

Exactly. Like ‘yo, we’ve completed this one, move on!’ It makes no sense. But musically for me, underwater is a great concept that’s inspired me. I played videos of crazy seascapes while I made the music. That was really helpful.

A visual stimulus to make sure you don’t lose track of the concept?

Yeah. I’m not sitting here in a wetsuit or anything, but I was busy making demos and kept things within the loose concept. I found it was helpful to make sure the production wasn’t super heavy. An underwater sound can’t be heavily processed and like ‘bam bam bam’

Even the way that things need to be given room to breathe. You need headroom underwater!

Yes! So it was nice to have such a big concept. There’s always something you can attach to it. I used to think concept albums were weird, but now I totally get it.

When did it become an actual album rather than a collection of ideas?

This whole thing started when I was on tour in China with Unchained. Jef from Yuku emailed me asking if I wanted to write some music with Razat. I was like ‘Sure!’ We’d never worked together but I was really into his music and sent him a message saying ‘Yo! I’m looking forward to working with you, I’m coming to Portugal soon, let’s do it.’ And he never saw the message.

We spoke before and he said he was getting better but he never saw that last message I sent him. So that took me a while to get my head around. I knew we’d be able to make something cool together. But it was super difficult to start an album on my own because I’d planned to do something with him. So in answer to the original question, I can’t say there was one definable moment. But I had a collection of heavier ideas and wanted to build around them with more atmospheric elements and vibes. From there, it started. The long intros and outros are part of the album for me. I don’t do them very often. It doesn’t make sense to have a minute-long intro on a four track EP. They need to be bangers. But with the album I had that freedom.

It’s a good year to be releasing this type of album!

Well I hope so. We do have more time but I’m also scared because people know me for bangers so I don’t know how people will react to it. It’s kinda new, but it’s super refreshing to write some more chill and mellow stuff.

Yeah man that was very very early. I didn’t know what the hell I was doing back then. I’d just been so heavily inspired by the years that came before that. The mid 2000s dubstep sound, Beat Dimensions, the really minimal stuff.

All the stuff from LA was popping then. Flying Lotus etc. That was happening at the same time as dubstep

Totally. Those years were a revolution for so many of us. There had never been such an influx of new music coming through on blogs and MySpace. It was a very inspiring time to grow up on music and it will influence me forever. It was like this sudden wave of ideas. I thought ‘hold on, I don’t have to wait for an MC for days, I can just make a beat and put it up’. I was making four or five beats a day. It was so refreshing.

Back on the album there are two very strong vocals. d00p, who you’ve worked with before, and the one and only Warrior Queen. Their place in the arrangement of the album and the whole flow of it is really important.

For sure man. Those vocals really bring the album to life for me. Most songs have voices sampled because it’s nice to have that human connection or feel. But then to have those full vocals from both of them were key to how the album comes together. Warrior Queen was such an incredible artist to work with. She’s been inspiring me since the tracks she did with Vex’d, Skream, The Bug…

The Bug was a huge driving force in that era we just discussed. He changed the game in the mid 2000s.

He did man. London Zoo is still a favourite of mine. I still play Skeng nine sets out of ten and it does the job every time. When I worked with Warrior Queen I showed her the CD Vex’d had sent me back in the day. I actually asked her because I wrote this demo and had found a vocal sample which says ‘she was a warrior queen.’ I knew I had to ask her to be on the EP. I asked Sam Binga to introduce us and, from there, it was two weeks and the song was done. I was honoured. She was incredible and such a professional. Then out of the blue she messaged me saying ‘Yo, I’ve just played the track on a big soundsystem in Jamaica, it’s banging.’ That was enough for me. I was very happy.

Awesome. From bangers to deeper moments, I don’t think I’ve ever heard a track like Reelwitu from you before…

Thank you, I was very hesitant to put it on there. It’s very different for me. The vocal sample is pretty famous, it’s a different tempo, it’s very colourful and long. Like you said – I’ve never done anything like that before. I was struggling to put it on.

There are some sad vibes, too. The last track, Lost, has a sobering tone to it. Perhaps because the way we’ve polluted the oceans over the years is a sobering message itself…

Well that’s also a personal one. The working title was Lost Friends. I’ve lost a couple of very dear people in recent years. I came back from a friend’s funeral and wanted to write a song about him and everyone else. It had that vibe that’s a bit reminiscent of the good old days. It’s sad because we’ve fucked up but there’s also an element of hope. Maybe we can do better. That’s how it feels for me. Not every LP needs to end with good vibes. Maybe in 10 years, and if humans have done better, then I’ll write an album with a happier ending. But for now… We fucked up.

We have man. We won’t have to wait for 10 years for another album, though?

No way. I’m actually working on two albums. I’m working on a beat tape for Saturate. They’re turning 10 next year and they supported me right from the start. I love their new stuff, they’ve evolved like we all have. It’s very exciting. It’s a beat tape of instrumentals that’s inspired by generation loss, which is when a picture loses its data every time it is uploaded and degrades. It’s the same as a cassette deck – you record over and over and the sound gets worse. That will also happen as you play the tape, which is cool. It’s interesting and inspiring; basically the beats I wanted to make 10 years ago, the beats in my head, I can actually make now. So there’s that. And I’m also working on another LP for Yuku too. So lots to do, lots to explore. We got time, right?

Subp Yao – Infra Aqual is out now on YUKU