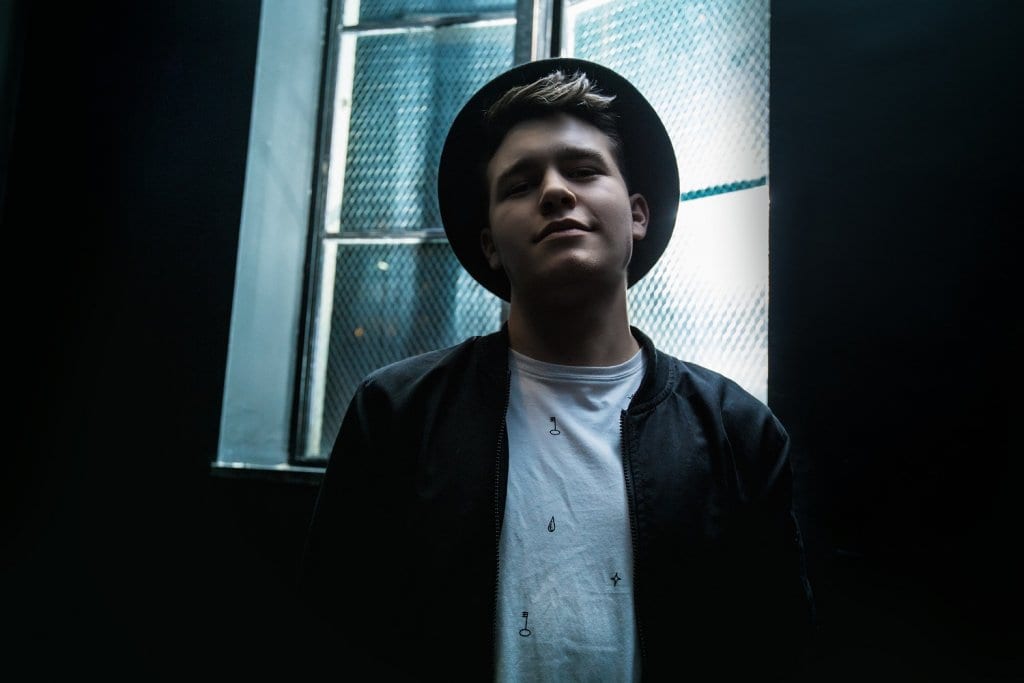 What a time to be an Eptic fan! Since April 29 we’ve had a new track every two weeks. Complete with teaser videos and awesome graphics (all crafted by him), it’s been nothing short of a creative assault week after week… And there’s still more to come with Overlord due on June 24.

We copped Nightshade two weeks back…

“Nightshade was a pretty cool concept,” says Eptic, known to friends and family as Michael. “All the influences were from old vampire movies and witches and things like that. The artwork for that one was a lot of fun and came together really easily with all the satanic references. Some of the other artwork pieces weren’t quite so easy….”

Find out why and LOADS more as Eptic runs us through some of his first and last experiences….

I trainwrecked the shit out of it…. It was like the classic movie scenario when everyone stopped doing what they were doing and just ‘boooooooed’ me off the decks.

Well my very first DJ name was pretty embarrassing to start off with… My last name is Bella. So I was calling myself DJ Bella. There wasn’t any dubstep around at the time so I was playing jump-up drum & bass and my very first gig ever was in a youth club function room at a party this girl was hosting. There were older guys DJing but I could take over for half an hour in between them. They were playing CDs and I was on the turntables… Which were broken. The records constantly skipped, I couldn’t beatmatch, I trainwrecked the shit out of it…. It was like the classic movie scenario when everyone stopped doing what they were doing and just ‘boooooooed’ me off the decks. I was gutted. I was so excited to be playing somewhere and totally fucked it up.

This was a very cool show. The complete opposite of my first one actually! It was with SKiSM at The Intersection, Grand Rapids, which is my new favourite club! I went on stage and was like ‘woah!’ It was huge – much bigger than I thought. It was one of my favourite shows ever and the crowd were awesome. I was pretty drunk too… Killer show.

I think it was D For Danger by Original Sin. That was one of the earliest 12s I bought anyway. Before that I was really into metal and I think the first record I bought of that nature was Slipknot’s Iowa album. I was into terrible metal as a kid. I was playing the guitar for years but, like most people, I picked up turntables and ditched the guitar. There was only one record shop in my local town. And only one jump-up drum & bass 12 in that shop. I had no choice. Luckily I loved the record! The rest is history…

Oh man, I have to be honest with you. The last record I bought was Ariana Grande album Dangerous Woman. It’s amazing! MUST DIE recommended it and he wasn’t wrong. She got it man! There’s some really good tracks but my favourite is the most girly track on there; Moonlight. I love the vocal processing on it. It is insane – I don’t know how they did it but it blows my mind! I’m back on that buzz to try and listen to everything possible… If I only listened to dubstep then I’d be making boring, linear stuff. Like 80% of the dubstep scene is right now!

I must have been around 15 or 16 and it was a real eye opener. A funny one, too. We went to this super sketchy rave, it was one of the first ever dubstep shows in Belgium. My friend who had moved over from Syria was coming with us but he didn’t get the concept of the party. He’d only ever seen them on movies… So he turned up in a bright white tux and white shoes. He looked incredible. Everyone kept asking him for coke but he was cool with it. It was an insane party – it opened up the world for me. We saw Babylon System and Noah D and the last track they played was Chainsaw Calligraphy by 16Bit. It blew my mind. Then the police came and shut down the party. That was pretty mind blowing too…

I don’t go out much unless I’m actually playing! When I’m back from tour the last thing on my mind is a loud club! I’m much more into bars and more chill environments. I have a favourite bar in Atlanta called Joystick which serves really nice cocktails and has loads of old arcade games like the old Mario games and Donkey Kong and Pacman and everything. Like proper retro. Shout out to John and Paul who first took me there. I love that place.

I remember seeing this video of Slipknot as a kid when they played a show in Tokyo called People = Shitt and I remember loving it because they showed the lead singer back stage freaking out being scared to go on and then when he finally gets on stage the whole crowd’s energy was so intense and wild I think that’s why I love dubstep so much – it’s got that same crowd fire and pure energy.

Lido has blown my mind many times He puts everyone else in future bass to shame. He started a lot of that stuff. He’s producing for a lot of people right now – like Chance The Rapper – so he’s not doing that many original productions for him but every time he does it blows my fucking mind!

My first release was on Chronos Records: Obey and then Fools and then a full EP. All in 2011. Chronos were cool to start off with; they have a great loyal fanbase who were really supportive of me. And they had a podcast which was really popular. So I cut my teeth with them and then Never Say Die snapped me up and I never looked back. Actually I do listen to old releases sometimes, just to remember where I’ve come from, but it’s a bit cringe. I’ve always got a cheeky sound but my old stuff is just too cheeky and childish. I’ve grown out of that phase.

We’re right in the eye of the storm now dude. I’ve been doing a whole series of tracks… But rather than release them all as a big EP, I’ve put them out as single tracks so I can do different artwork and teasers for each one. It’s worked out really well and everyone has been really supportive but it’s ended up as so much work. Much more than I expected! There’s a different character for every track that catches the vibe of the track. Every teaser video brings across the vibe of the track as well. The tracks were done way before the artwork. I was still finishing the artwork and teasers on tour. I finished one just before this call.

Then after this we have a few collabs in the pipeline…. I’m talking to some big guys outside of the dubstep spectrum which is very exciting. Watch out!