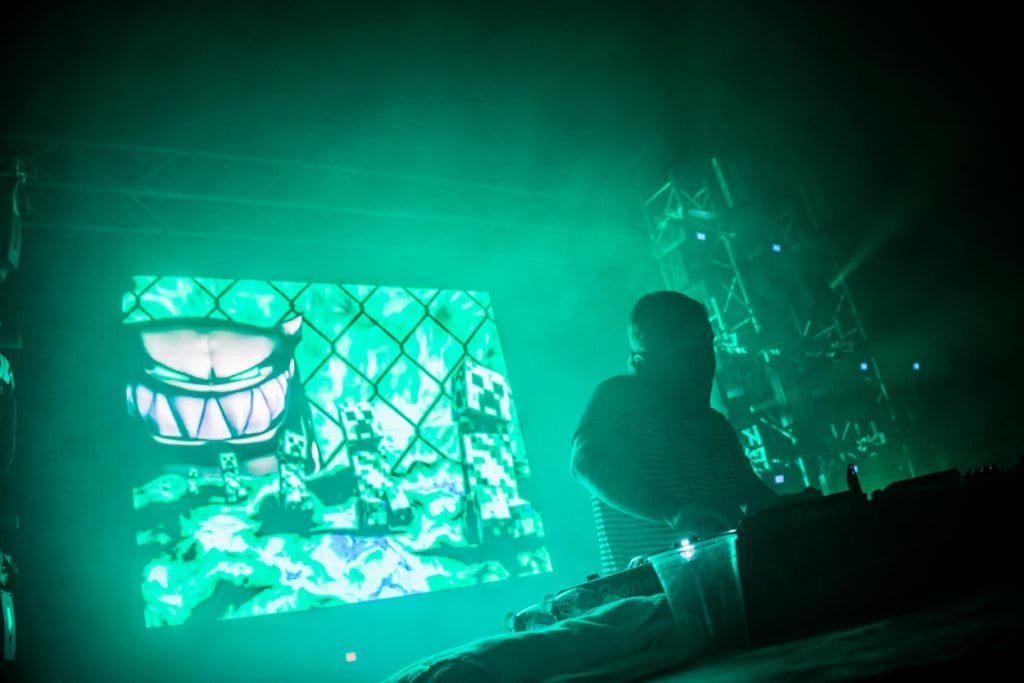 Feed Me is staring down the barrel of a lot of exciting plans, releases, shows, sounds and ideas this year.

And it starts next month – February 11 – as he headlines our first party at brand new London venue Printworks. A cavernous industrial maze of a space, it’s the perfect playground for Feed Me’s teeth-baring musical mischief as he joins the likes of Sub Focus, Friction, Dimension, Mollie Collins, Holy Goof, Taiki Nulight and many more at one of our maddest events to date.

We called him up to find out about any particularly interesting, weird or pivotal events he’s experienced over the years – both as Feed Me and Spor. It starts off with tales of tear gas and riots and ends with some serious future speculation by way of his debut Feed Me show where he played after Deadmau5. Get to know…

It would be cool to get tales of your weirdest or freakiest shows over the years. What stories have you got for me?

I wish I had loads of great stories off the top of my head. It all mashes into one strange blur sorry. My memory is terrible. Once I get going I tend to remember them.

You told me once about a really early US show that was memorable for all the wrong reasons.

Oh yes, it was in the desert and got shut down. It was really unpleasant. There were dogs jumping on people, tear gas, police with batons. It was chaos. Really horrible traumatic chaos. I’ve had a few shows shut down in the US. One in an ice hockey stadium where the police chased us out then one in Baltimore that got shut down by the fire department while I was actually playing. I’d never seen an American firefighter before and this guy came into the booth and was messing up what I was doing… I was like ‘what you doing mate?’ I thought he was in bright yellow fancy dress – turns out he was a fightfighter, he wasn’t happy about me not responding to him.

Ha! Can you pinpoint any particular early shows right at the start of the Spor days where you’ve felt progress or felt things go up a level?

I should have done but it was all very natural, slow and incremental. Just a long steady grind – I enjoyed the shows and each one was a total lottery. I played for all types of promoters; super professional ones and rag-taggy piratey ones. I never set expectations for the gigs and enjoyed them whatever the circumstances. And I did that for a lot of years. I think the first Feed Me shows was when I could really see potential for elevation in that way. I was supporting Deadmau5 so I could see the scale of the world I’d found myself in. The scale was so much bigger, the production was custom, it had a crew and roadies. It felt like a touring operation rather than a DJ rocking up to a club like I had done for years before. It gave me ideas about my own show and what I might be able to achieve one day.

What was the first ever Feed Me show like?

Quite strange. It was very last minute – I was supporting Joel (Deadmau5) at Brixton Academy. I didn’t have a set planned and most my tracks were unfinished. I just wanted to hear what they sounded like through a big system. Joel ended up choosing a different slot, too, so I ended up playing after him which was weird. It felt very experimental. I remember thinking ‘this is odd’

So your first ever Feed Me show was kinda headlining over Deadmau5!?

Definitely not. I didn’t even have a record out at the time. No one had a clue who I was. I just happened to be playing after him.

Was that scary or liberating?

Both. I felt a certain amount of trepidation because it was new to me but it was also very freeing – I didn’t have to conform to any standard or expectations. All my previous experience was limited to drum & bass so I had no preconceptions on what my set should sound like and who I should satisfy other than myself. It was a unique, one-off experience which, definitely in hindsight, was actually fucking mad and unique.

Then you started touring with Deadmau5…

Yes but that was much later. I’d had my release out by then and everyone had heard it – people know who I was. I had a head start in that way. That’s when I started to really realise the potential of what I could do.

If you want to know about scary things I’ve done, the live show was the scariest. Not just for me but for everyone involved. None of us had worked on something like this before – it was a communal learning experience. For better and worse. It was very exciting. To see something I’d initially modelled with clothing wire and cardboard actually welded together was gratifying. It was also a huge learning experience with a lot of researching and applying different things. It stressed us all out – it was far too heavy to practically tour, I think it almost killed a few people a couple of times. I’m working towards a new live production this year… But a lot more compact and lighter weight. I’m thinking about new ideas on how I can perform, what I can do, visuals I can use

You’ve been using Tilt Brush recently. Is that related to your new live show in any way?

I would like to develop visuals in VR but no, I’ve used Tilt Brush and shared those videos because I find VR incredible. It’s a childhood dream since reading sci-fi as a kid. I can’t believe how long it’s taken to become accessible. It’s hard to describe to people why it’s important unless they’ve actually tried it. I’ve had friends come round and ask about it and instead of even trying to explain I just put the helmet on them and let them see for themselves. Within 15 minutes they’ve forgotten where they are. It’s interesting to see how they immerse themselves in that environment. But any type of creative software – like Tilt Brush – is fascinating. Being able to draw in mid-air and manipulate it hands-on. I’m sure it’s going to develop even more, we’re just at the embrionic stages. What I want is a broader capability of exporting things – so if things are designed in VR there needs to be more of a fluid transfer than screen shots. But the scope is there.

How about production? I’ve spoken to producers who love the idea of the space VR could give you…

I don’t know. That doesn’t massively excite me. I’m happy producing in the dark, just listening. I don’t need visual stuff going on – I focus on the sound. But if you put yourself in an environment that influences you to write in particular ways? Now that would be interesting. It really does transport you, you can forget where you are. It would be an interesting experiment…