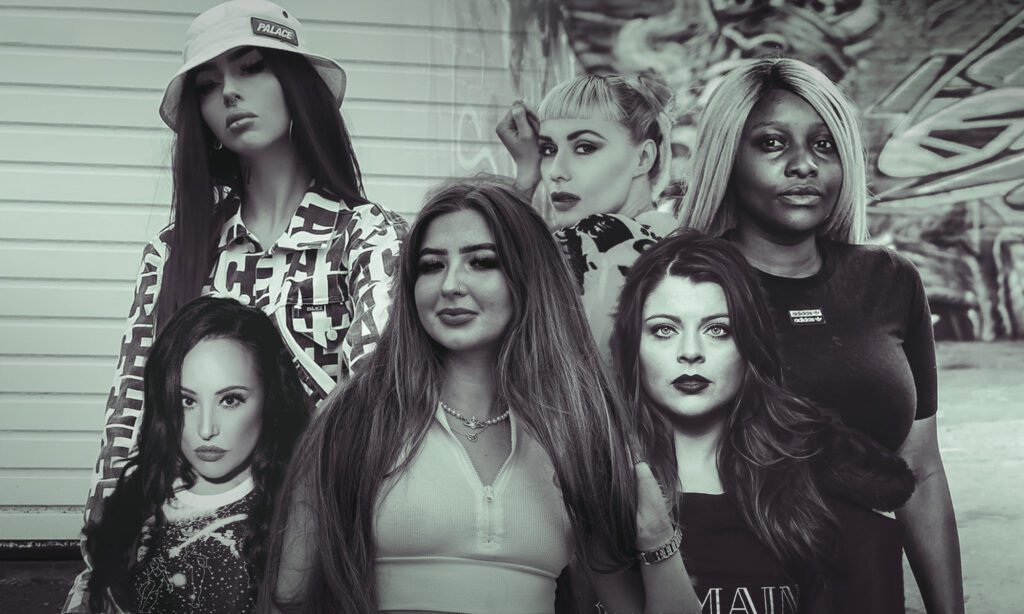 The best things happen when people unite. Jungle drum & bass is founded on this notion with a litany of crews and collectives pushing the genre forward and working together. From Virus or Ram Trilogy in the 90s to the more recent collectives such as Dynamics or EQ50.

Now say hello to 180 Society where the vision and message is simple: to push all female artists across the board and to encourage a culture of digging deeper for talent rather than just looking at social media numbers or reacting to current hype.

The collective is founded by Charlotte Devaney’s Karma London & Planet Talent Agency. We interviewed Charlotte last year and told her inspiring story. It’s a highly recommended read and remains the only interview on this site which includes anecdotes about Snoop Dogg, Megan Fox, Ali G and Simon Pegg. In case you need a re-cap, Charlotte is an incredibly hard working professional in the scene who continually wears a dizzying array of hats.

Her career began as a dancer, but she’s since gone on to become an artist, DJ, songwriter, producer, manager, promoter and plenty more in between. It’s a hectic CV, but at the basis and foundation of it all is Charlotte’s drive to boost others, help new talent, support the scene and consistently batter down doors and break boundaries as a woman in a male dominated industry.

180 Society is a reflection of all of this as she invests her years of industry experience and rallies up as many talents as possible to help fight the gender imbalance on line-ups and inspire a new way of thinking for promoters and fans. This isn’t your ordinary crew and if you’re a female artist she wants to hear from you.

Ahead of their next event at Ministry Of Sound on March 25 – and as part of our all female content running throughout the week of International Women’s Day – we caught up with Charlotte for all things 180 and more of her multi-faceted and hugely successful insight into the industry. Time to get inspired once again… 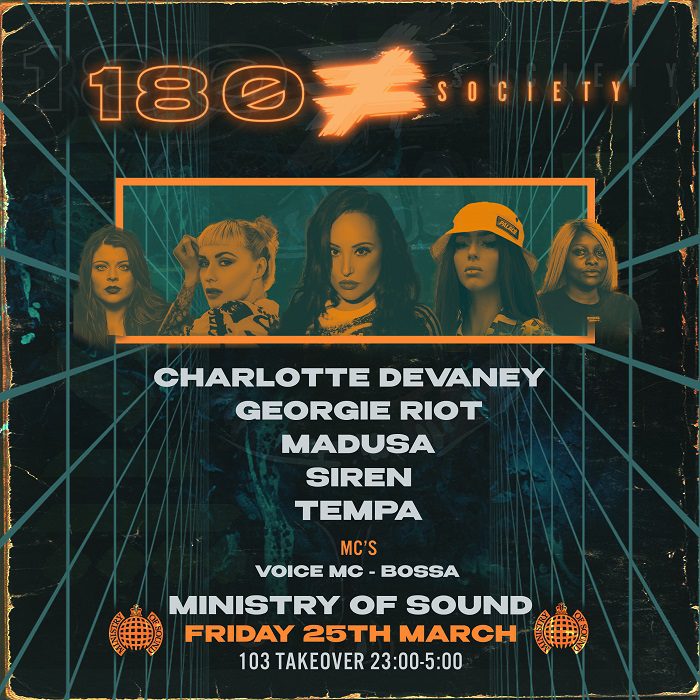 180 Society: Tell us everything…

The idea was to put together a brand/collective predominantly comprising females in the game, new and old, legends, newcomers, everything in between and showcase everyone in the scene. If you’re talented and you’re a female and making and playing D&B we want to know about you. It doesn’t matter who you are, how old you are, how many followers you’ve got; we want to celebrate you and boost you.

I keep seeing the same names on every flyer. Anna Key did a list of all the females in drum & bass and there’s over 450 names on it so where are all the girls on the line-ups? I’m sure a lot of promoters think ‘I need a girl on the line-up!’ And they just look up the most popular names and book them.

That’s right. It’s about talent, it’s about dedicated people who are doing cool things and want to contribute to the scene. It’s not about hype, it’s about whether you’re talented and how real you are.

This is really important. I believe everyone who is established has a duty to help people come through. I’ve always been a firm believer in this. Everyone needs to bring the next generation through – especially for women because it’s hard in bass music to be taken seriously.

You’ve been involved in the scene for a long time in all kinds of capacities. Has there been any progress over the years?

There has. When I broke through it was different and there were only a small group of female DJs across all genres. I was lucky, I got a lot of work, I was travelling a lot but not everyone had the same treatment as me.

Things are a lot better now but there is still a sense that some promoters are just booking one woman for tokenism. I don’t feel that creates a fair chance to promote all the talent out there. So that’s where 180 Society comes in. Booking us is a chance to support a wide range of female talent and represent a much better scope of the scene.

We’ve got our next show coming up March 25 at Ministry Of Sound and we’ve got more coming up in the future. We’re hoping to do takeovers and have our DJs represent at different nights across the UK and beyond. And we want to hear from all female talent out there. Hit us up on the socials, send your mixes, your tunes, tell us what you’re up to.

We are and we’re hoping to grow a lot more. There are a few solid members who will be active across a lot of 180 Society things though; Georgie Riot, Siren, Millz, Madusa, Rap, Kaz, Tempa. A few names you might see on the regular basis. But the main aim is to showcase and celebrate all talent.

We’ve got to stop this culture of following and copying everyone else. We need to look at raw talent as well as everything else. People are quick to typecast you as a certain sound or just look at how many numbers you’ve got or what flyers you’ve been on or where you have played, in my opinion these shouldn’t be the main things when booking talent.

It’s whether you can mash up the dance!

Exactly! Can they mash up the dance? Are they putting out sick music? Are they really doing cool shit?

I think there has been a dominant flavour of conservatism and people not willing to take risks in dance music, especially on line-ups…

Exactly. And things have become very sterile with numbers and people playing it safe. So many line-ups look similar. I keep wondering how can a new artist even break through now?

For me, I’ve always been an individual and not followed the crowd and any successes I’ve enjoyed have come about because of that. But I do worry about how hard it is for the new generation now.

Totally! I saw a really inspiring post of yours from your perspective as a manager and your role bringing Fabio & Grooverider and the Outlook Orchestra’s legendary show together. You owned it and that was great to see. So with that in mind, you must think about the current status quo from a managerial point of view too?

I do! I live in a man’s world whether it’s as an artist or as a manager. 95% of the time I’m dealing with men. I’ve had millions of doors slammed in my face and I have to be a strong woman in business, even more than I do as an artist.

And actually with that post, I would never usually post about my role as a manager on my artist socials. But I thought, ‘If Jay-Z can do it, I can.’ Some of the biggest artists out there are also managers. The biggest moguls are guys like Kanye, Jay-Z, P Diddy. They’re artists who run empires and that’s what I’m trying to do.

And with that post about the orchestra, I thought, ‘Okay this has gone viral and I’m proud of this!’ Along with the Outlook crew, I sowed the seeds and made that happen so I’m going to own it! Especially as in bass music 100% of the promoters are men, so could be another reason why we struggle as female artists out there. We need more strong women running things and in the meantime we need the industry to be more accepting of strong women and recognising their achievements.

Yes! So please hype up the next 180 Society event at Ministry Of Sound…

So it’s March 25 with myself, Georgie Riot who’s just released a record with you guys, Madusa who is killing it, Siren who’s doing big things and Tempa representing Birmingham. Actually Fabio helped her get her grant to build her studio, she’s Bassman’s niece and she’s smashing it with production and shows atm.

It’s a really strong line-up, it’s happening in the main 103 room and the last one was absolutely sick. It went off in there and we’re looking forward to coming back. We got a few male MCs on the line-up too but I want to make sure the women take centre stage. That’s what it’s all about for us and we’re just getting started… So all female talent please hit us on the 180 Society Facebook page or Instagram and promoters please look at who’s out there and take a chance on new talent! Invest in people! That’s how we’ll all move forward.

We caught up with some more of the 180 Society crew…… 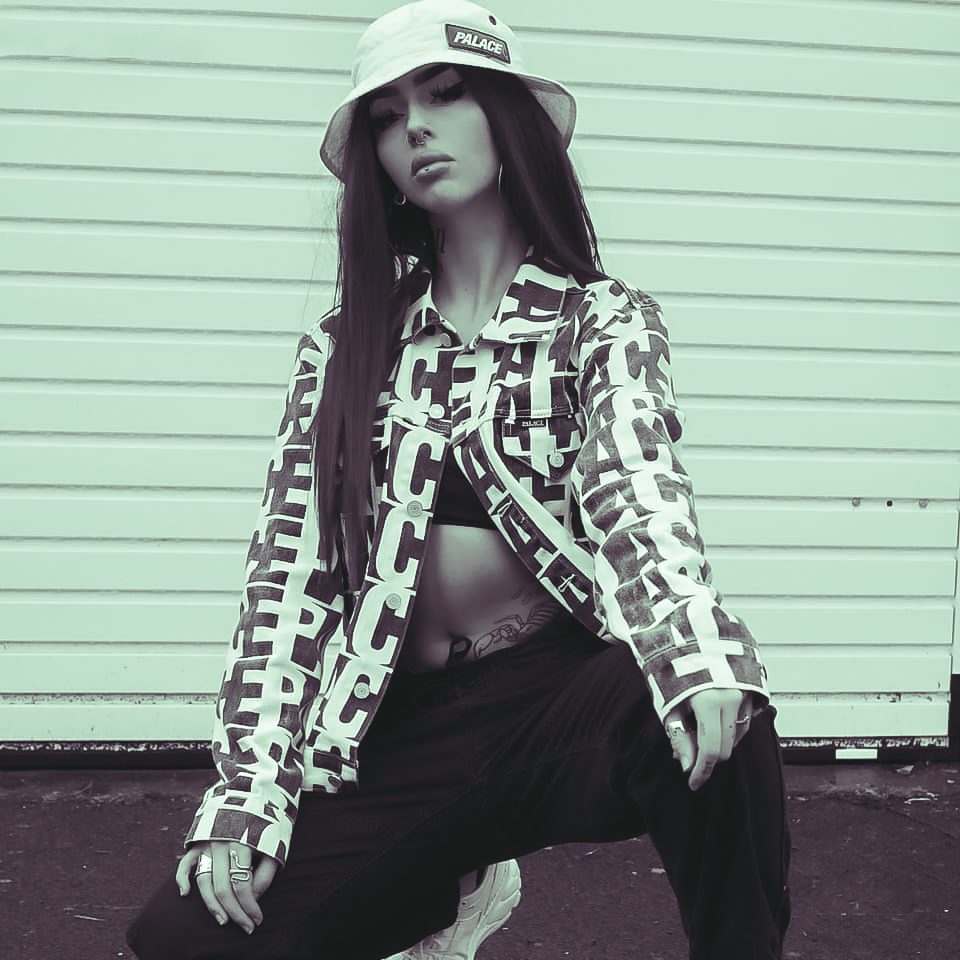 “I’m really looking forward to working with 180 Society and the fabulous Charlotte Devaney. Charlotte is a pioneer for all DJs not just women! I’ve looked up to her ever since I discovered her and the ascending path she is on and this brand that has been created in the process.

It’s a bumpy road navigating through this scene as a female artist and having wonderful, creative, charismatic people like herself and the many others she has worked tirelessly to surround herself with is a gift in itself and very inspiring. I have full trust in this brand and cannot wait to see what the future holds, this sort of inclusivity reminds me to keep uplifting one another as there is room for everyone at the table no matter how you bring your style!” 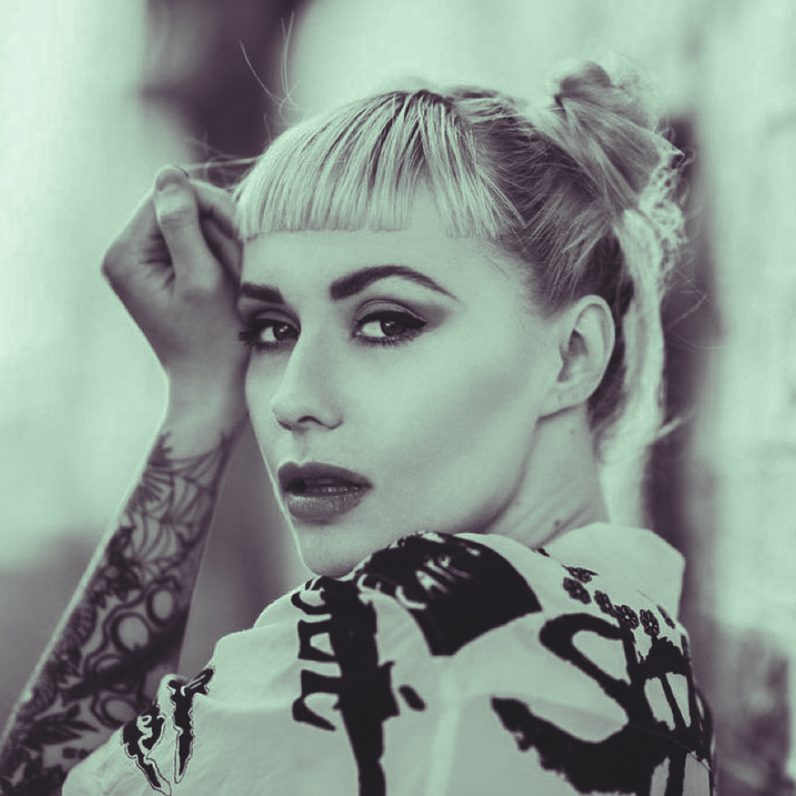 “I am incredibly excited to be a part of 180 Society because there are so many amazing female DJs and producers on the rise in the drum and bass scene at the moment, it’s really great to see. It’s so important that we come together to support each other to make sure that women, trans, non-binary, etc are all represented in the scene to the same extent that men are. I am inspired to succeed as a woman in drum and bass and I am hoping to inspire other women to choose music as an option. It’s 2022, let’s challenge that gender imbalance and make a change!” 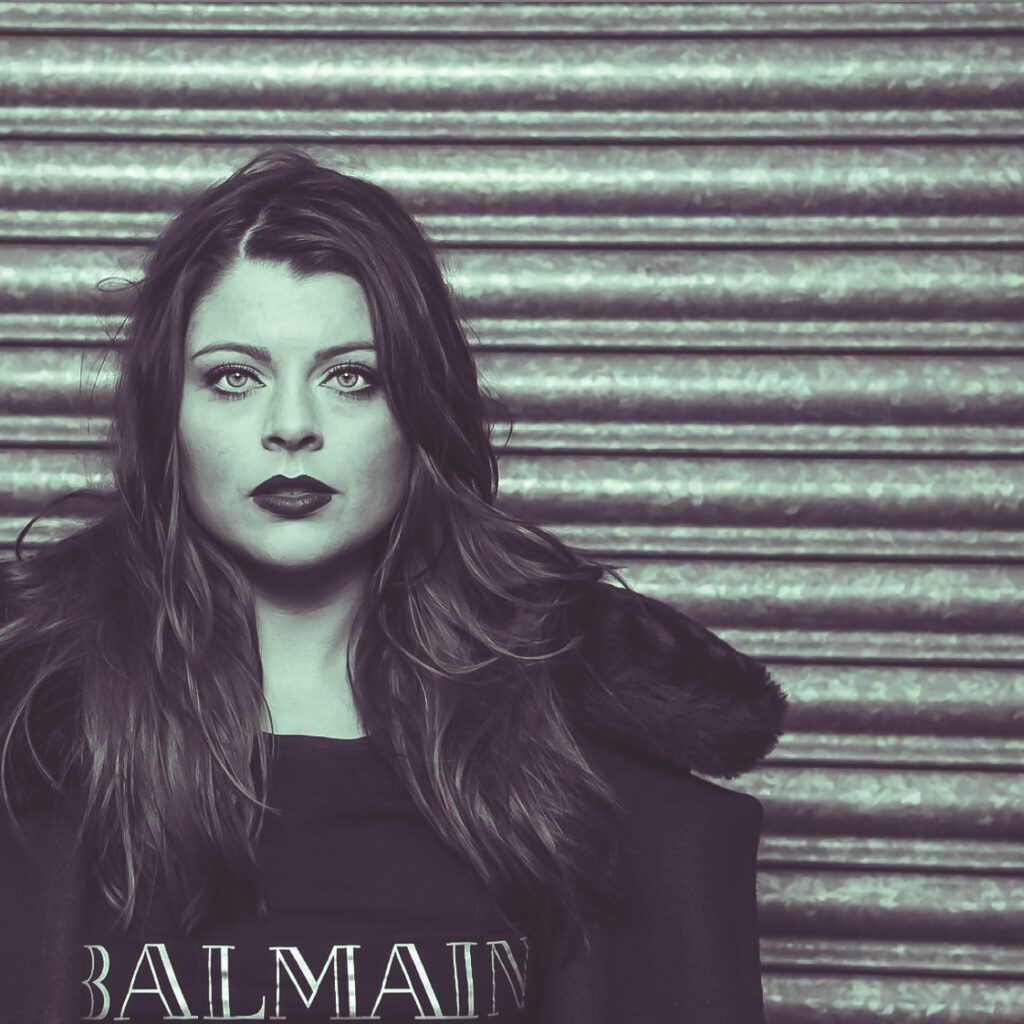 “Whether you are a woman, man, or non-binary, we are all artists and we, as artists, all deserve equal rights to strive, thrive and achieve our dreams. 180 Society is a unique and exciting brand that I am proud to be a part of, bringing together Female Artists in the scene.

“With D&B music on a high right now it’s a great time to show that this all-female cast can play, produce and serve as an inspiration for any other female DJ’s trying to make a name for themselves in all dance music genres.” 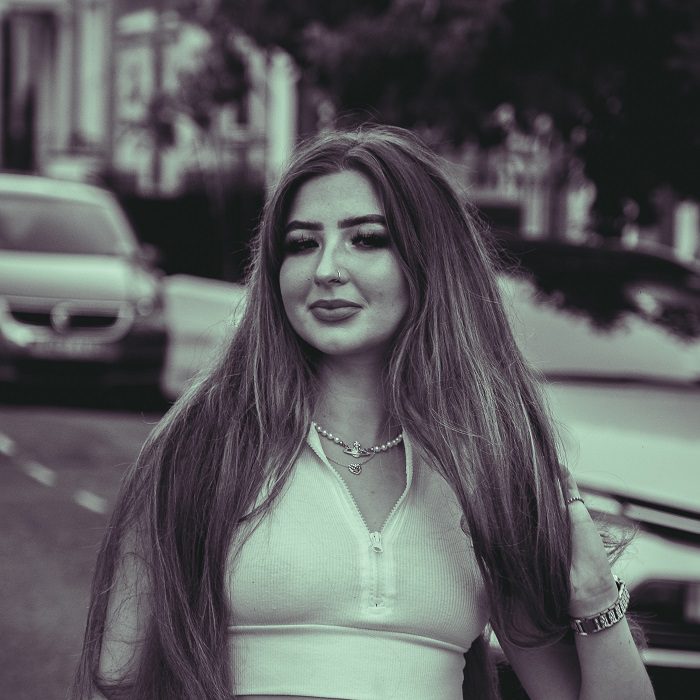 “I’m super excited to be involved with 180 Society! Creating a new movement to get more women involved in the D&B industry is something we are missing right now! Breaking through as a female in D&B has been tough, but with my strong passion for the music I’m prepared to fight anything.” 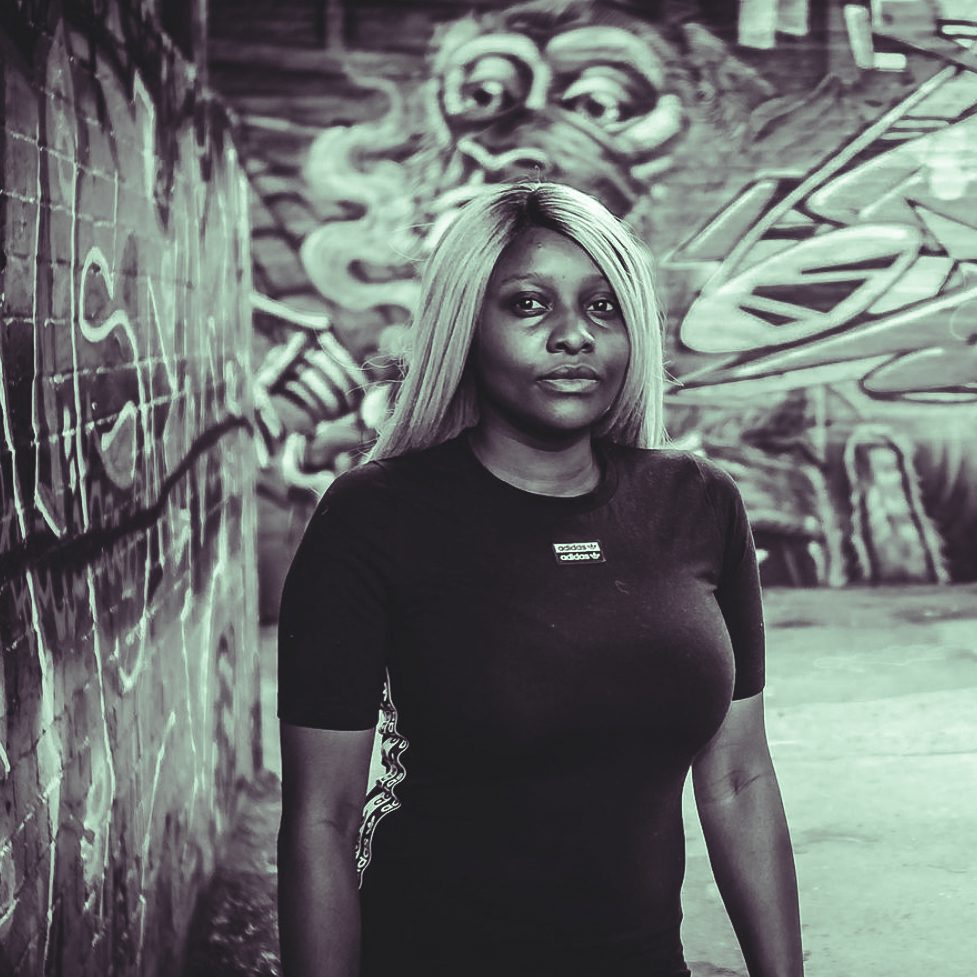 “I am excited and truly honoured to be involved in 180 Society, which will showcase that there are talented women within a male-dominated genre.”