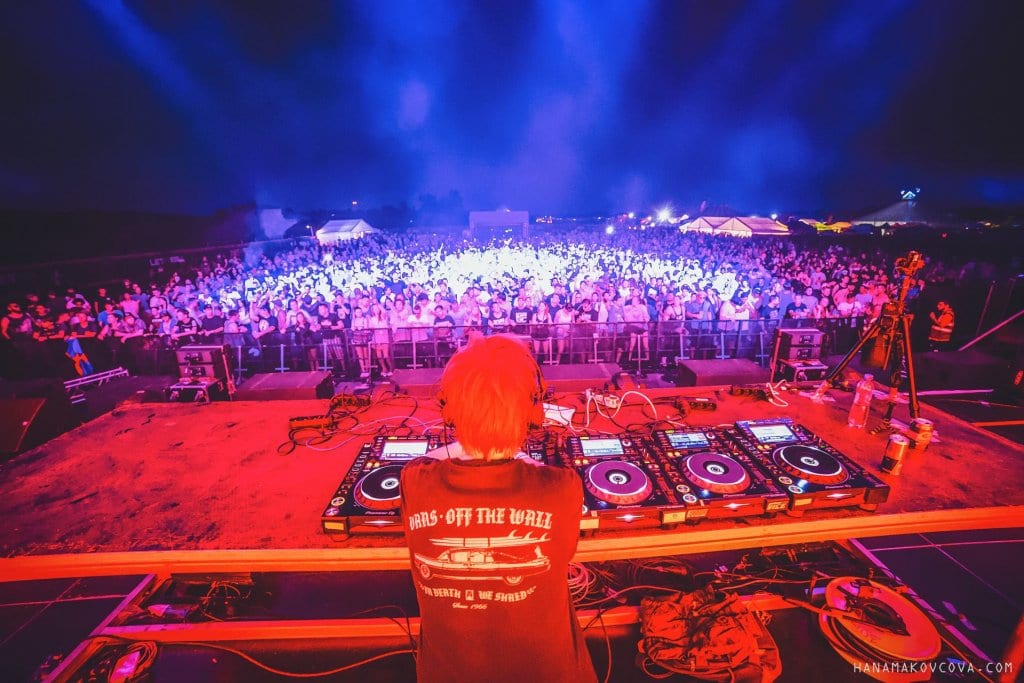 The aim: to level the global playing field for all D&B artists of all nationalities, to create an inspiring, informative and encouraging environment for emerging, aspiring and dedicated artists, to share tips, ideas and plan for the future. A prominent proportion of the genre were present; with Let It Roll happening straight after BEC, it caught everyone in the right place at the right time.

Naturally there were afterparties. One particular party has led us to this feature with Slovakian artist – 20 year old Changing Faces. She single handedly managed to converted our status from ‘just a quick beer’ to ‘dancing way beyond bedtime’ (and our consequent hungover status for the final day of the conference)

In a nutshell, she smashed it. A balanced, studied blend of liquid, soul and deep D&B, unafraid to drop classics and switch vibes, she had the dancefloor of The Roxy in the palm of her hand and never once got carried away (that job was for Marky who followed her and tore us all a new one with a surprisingly heady mix of jump-up)

Inspired, we checked out her Soundcloud. We weren’t alone. When Bcee couldn’t make it for his set on the Hospital stage the following night at Let It Roll, guess who stood in for him?

With a steadily growing repertoire on labels such as Fokuz and Celsius, Changing Faces isn’t just an on-point DJ, too. In light of her Direction EP – her largest release to date – we called her up to find out more. Get acquainted…

How was Let It Roll?

A lot of fun! I played for Fokuz on the Saturday which was good, but the real highlight for me was standing in for Bcee on the Hospital stage on the first night. It was amazing, the crowd were nice and everything was in the right place. It was a real high for me.

Last minute vibes! I’m sure Bcee would respect the choice of replacement. Deep but exciting isn’t the easiest route for D&B DJs

I keep noticing this too. I have guys warm up for me and they play too hard. It ruins the vibe for a while and it takes time to take the vibe to where I want it to be. I’ve learnt from these situations and every time I’m playing on a line-up before a big act I take the time to learn their style (if I don’t know it already) and make sure I complement them. You have to take care of your selection, no? I spend hours practicing mixes and working out the best mixes too… I love it!

Have any local DJs inspired you in this way?

There aren’t many local guys who inspire me besides my friends Ero Drummer and M.Bass. They’re my good mates who I work with in the studio. We don’t have many good producers here in Slovakia. Certainly not liquid ones. I look to the rest of Europe for those type of inspirations – Hybrid Minds, Dimension, Dawn Wall, Technimatic… These guys are killing it for me.

How about the scene where you’re at?

It’s healthy. We have a lot of parties and host a lot of our events too but it has to be said that the harder stuff is still a lot more popular over here than liquid is. I’m one of the few liquid producers out here.

You’re not in a crowded market, though. You are the contrast.

Yes, that’s cool and I agree the balance is important. You can’t have it hard all the time. I have to say that there are some great liquid producers here – it’s not just me on my own – but most of them are grown up men with families and work commitments. I’m only 20 and I’m the most active liquid producer at the moment.

You’ve been releasing beats since you were 17 then…

Yes. I’ve been producing since I was 15. My old tracks are so bad, though. Like really bad. They started to get decent around two years ago with my releases on Celsius.

Morning Sun and Nothing You Can Say… They landed around the same time didn’t they?

Pretty much. And also Deep Inside with Macca landed around the same time too. It was a good way to properly start releasing. But then I had to take a break to finish school and get more equipment so the next EPs came out a year later. There’s been a year between each EP but I’m making up for lost time now. I made my Direction EP in two weeks.

Yeah. I needed new music, I was really inspired, I had some ideas and I pushed myself hard. I’ve never worked so hard. It’s driven me – I’ve got more coming on Celsius and have a collaboration coming with Ero Drummer and M.Bass with Frank H Carter on the vocals. I’m very happy about that one. Then more collaborations with bigger names and nice vocalists. The more you release, the better the opportunities, right?

Yes. So obviously we first heard you at BEC which is all about the opportunities for D&B artists around the world. Do you feel that as D&B gets bigger worldwide it’s been easier for you or you have had more opportunities?

This is a hard question. Slovakia is fine for the local parties but this is nothing compared to Holland or UK. Those scenes are real and full of opportunities and exciting parties. That isn’t quite the case in Slovakia. I’m always trying to look at a much bigger picture, though, and I stay here because I’m so close to a lot of countries – Austria is an hour away, Czech Republic is an hour away. I have no reason to move.  I’ve had some nice shows over the last year… Germany, UK, Holland, Austria and so on. Things are developing nicely.

At what point did you realise D&B was going to take over your entire life?

The moment I first heard High Contrast – Kiss Kiss Bang Bang I was hooked. I found some videos of him DJing at a Slovakian festival and heard his remix of Ready For The Weekend which remains one of my all-time favourite tunes which I still play almost every set. And from High Contrast I found Hospital and from there it was gameover… I knew I would make it, DJ it and live it. Listening was not enough for me!