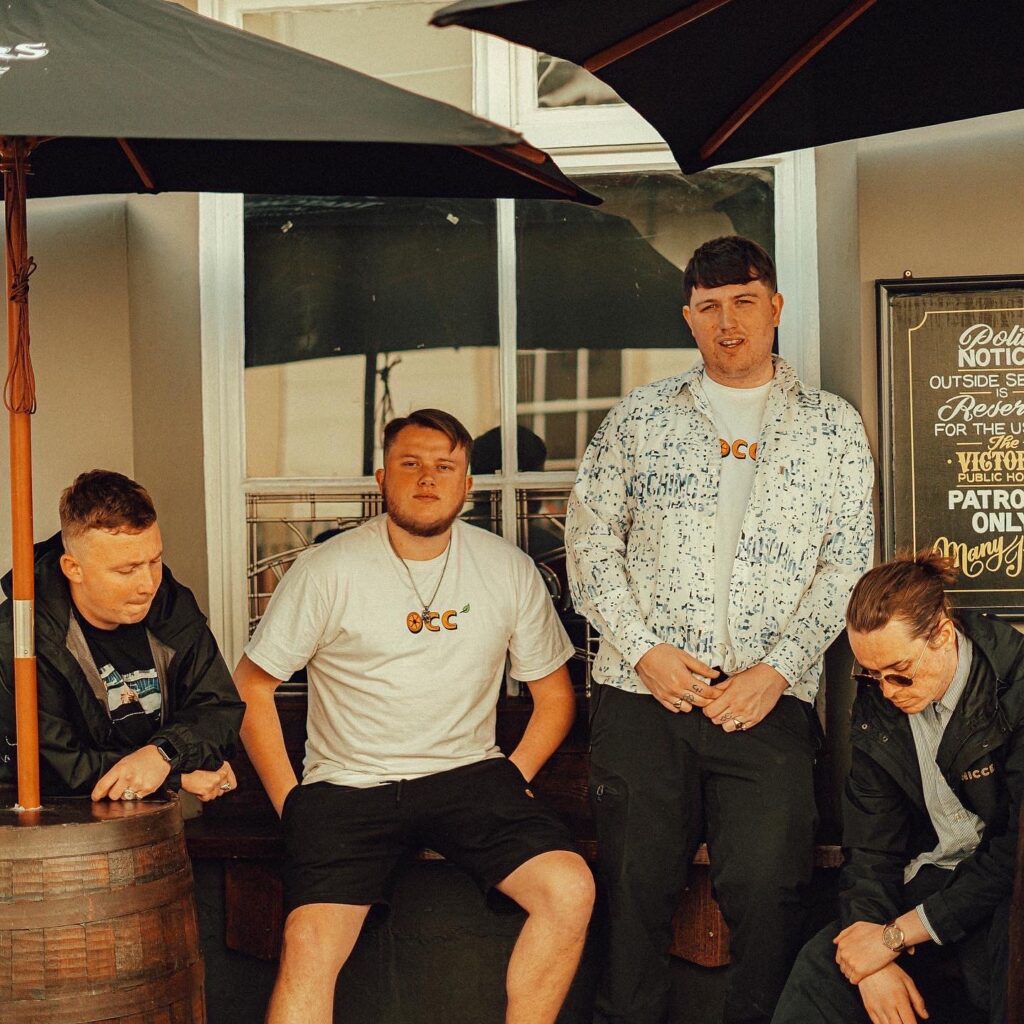 Quick maths, long story… OCC comprises four new-gen artists who are all in the prime of their game with strong solo aliases and are now joining forces, coming together in that classic old school jungle drum & bass way.

Strength in numbers, crew mentality: In the words of the late great Skibadee, they’re coming at you like a bazooka. And shots are firing left, right and centre. Right now, they’re taking fire with Jappa and Lupo’s Darkest Night, a big horn-heaving banger that’s been in their artillery since pre covid times. Prior to that they’ve wounded floors galore with massive cuts such as Tectonic with the legendary Jakes, and Throne with the aforementioned GOAT Skiba (RIP).

We caught them all together to find out more and chat about MCs, collaborations and why they’re here for the long game.

Come on then… What does OCC stand for?

[All laugh] We can’t tell you. It’s folklore!

Ah it’s on a need-to-know basis?

Objectiv: And the people in this room are the only people who need to know!

One of those ones. So how did you all link up?

Jappa: I met Teej and Objectiv at Percy Mingle years ago. Then me and Lupo linked up. We got a mate called Trakker who was part of it, too. So to begin with it was the five of us. That was OCC. It came about at Boomtown, we had a group chat after that. We were all making tracks together. Four-way collabs, three-way collabs. So many different things. It made sense to make a collective.

Objectiv: I was a little bit later innit. You all went to Boomtown together.

I love the collective spirit. All the best things come about through crews. Supporting each other – jumping in on collabs / sharing each other’s stuff. Strength in numbers!

Jappa: We all bring something different to the table. Felix is mental on the buttons, for example. Teej is mad with his subs and his layouts. Lupo is mad with the bass and I do my own thing.

Objectiv: We all complement each other and bring something different.

Jappa: And we’re not scared to tell each other what we think. We might argue about it a bit, but everyone wants the best outcome.

Totally! I was gonna ask about what the special ingredients you all bring to the OCC cooking pot!

Objectiv: But what do you bring to the table mate?

Teej: I love sub bass, I love low deep stuff, so I bring as much sub and darkness as I can while keeping it not too emo.

Jappa: You smash it mate.

You all do! You’ve all come through at the same time but in your own ways with your own styles. Lupo when I think of you I think about ridiculous basslines for example.

Objectiv: Yeah you can smell them for a mile away.

Jappa: He didn’t come from god, he came from the devil!

Ha! Objectiv, how about you?

Objectiv: I guess I’m captain drums. Drums are my thing and they’re my favourite part of the tunes and the boys are happy with me to do the drums and I love tweaking for hours. I could do it for days.

Which one out of you stops that tweaking and draws the line? Who’s cracking the whip?

Jappa: We all come up with ideas, we all put different basses in. We all use each other samples. But I like doing a lot of melodies and bass lay-outs…

Objectiv: I don’t think anyone is cracking the whip, really. It just naturally works.

Jappa: Some tracks might be more of one of us than the others.

Objectiv: It all depends doesn’t it? Quite often I’m on the buttons.

Jappa: Then we all jump in and play with ideas and try things out. We’re all very vocal and will vocalise the noises we think will work and one of us will get on that and make that type of noise on the DAW.

Lupo: Then we all add different concepts or perspectives until we feel it’s done.

The beauty of there being four of you is that there’s a high level of quality control. You got all four of you on it. You’re a lot less likely to fling any old shit out.

So we need to chat about Throne and big up Skiba. RIP!

Jappa: He’d booked me for his events previously. We were chatting and he was playing my sets during lockdown and we got on really well. He rated me, we talked a lot about doing tracks and worked on a few things. With Throne I messaged him saying, ‘You wanna jump on a track with OCC?’

Objectiv: He smashed it!

Jappa: He sent back the full vocals in a day. We were all like, ‘What?!??’ His lyrics say it all – no one can test his throne. He’s the king. Always will be. You can’t beat him. It’s heart breaking, the whole thing.

Totally. That story right there is testament to how inclusive and supportive he was, especially of the new generation…

Jappa: Yeah if he was on a vibe with you, he’d be all over the collaboration straight away. He just wanted to do sick stuff.

Objectiv: There was no one like him. Even the way he interacted with people. No one else was like that.

Totally. You guys work well with MCs don’t you?

Objectiv: Absolutely. We love MCs. They’re what D&B is all about. You go to a night out and it’s not half as good if it hasn’t got an MC. MCs capture the spirit and vibe of what drum & bass is truly about.

Lupo: Plus the music we make is so minimal and bassy, having that vocal element on top is essential.

Jappa: We all love grime and drill and hip-hop as well, so we have a big influence from MC-based music.

Was grime the first love for you all?

Teej: It’s always been a big love for me, hip-hop too…

Jappa: Punk and rock were big for me as well.

Objectiv: When did you get into D&B?

So Waterworks was the first tune on OCC I heard. NV’s bars are so sick!

Jappa: Yeah that’s just my track but it came out on OCC. We made that track after a show for Skibadee. It was a live stream with me and Shotta. I had this Cutty Ranks vocal on it and one day I was over NV’s and told him I reckon he could do something sick on it. He had the bars right there.

Objectiv: It was mad. They fit so perfectly.

Jappa: Yeah he had the lyrics for a grime tune but they worked so well on this. He’s a very talented and eclectic MC.

Sick. Darkest Night now… Love that sample. So many people have used it haven’t they!

Lupo: I was over Jappa’s house and I can’t remember what tune it was but we heard it being sampled and we all went, ‘Wow we need to use this!’

Jappa: Yeah we went on WhoSampled and found the original. It’s called Darkest Light. So that’s why we called the tune Darkest Night. Then the artwork was Felix’s idea to use the Batman vibe with the OCC logo. It all came together and the tune has gone off.

Lupo: It’s been around for a bit now. We’ve been playing it for a few years, and it’s always kicked off

Jappa: Yeah we made it before Covid.

Jappa: Yeah when it’s done right, you can’t beat a sample. Teej is the man for samples aren’t you Teej?

Teej: Totally. I come from hip-hop so I sample a lot of vinyl. I got a hip-hop alias as well, Noir Beats. I sample as much as I can and there are so many subtle things you can do. I love it when you find a sample and it creates this groove or idea.

Objectiv: You know you’ve got a sick sample if you can loop it up and have it playing for hours and it doesn’t get boring.

There’s an art to isn’t there?

Jappa: Yeah. Just whacking a beat to a full song or hook is lazy. But if you’re crafting it into something so different and creative that people can’t recognise the source of it, then that’s artistry

Objectiv: I got taught in uni that if you sample something and you chop it up and you do your thing with it then you’re not infringing copyright, it’s your own creativity then.

Jappa: The one rule is that you don’t sample other people’s bass sounds or drums from within the genre. That’s a big no no.

Damn right! What’s up next? You all seem pretty organised and with four of you on it you’re probably stacked…

Lupo: Yeah we got a lot of stuff coming. We got our first full EP coming in August. Before that, in July, we’ve got things from Teej and Objectiv. Then we got an EP from Jappa and Napes in September.

Jappa: Yeah Napes isn’t part of OCC but if you do a collab with one of us then it can be released on OCC. We got collabs with Trex and various other tracks with artists we like.

Objectiv: We got complete creative control too. That’s a really important thing for us.

Jappa: Yeah that was what inspired us really. We didn’t want labels telling us what to do with our own tracks when we know what we like.

And the label isn’t sitting on your music for ages!

Lupo: Yeah there’s a bit of that but I have to say, we want to build tracks that last for the times. So if a label does sit on something for a while then that shouldn’t affect the tune, you know?

Objectiv: Look at Darkest Night – that’s been around for a few years before we’re releasing it.

Objectiv: They’ve got longevity and that’s what we want. There’s a lot of saturation in music. Especially over covid with everyone making tunes. There’s so much stuff it’s harder to shout above people, so it’s nice to have something that sticks out.

I think being in a collective helps there too! We’ve come full circle.

Objectiv: We just want to do things properly and we all care about the craft. That’s what this music means to us.

Lupo: We’ve all got different ideas and it’s mad because we’ve only really been officially releasing things as OCC for half a year.

But you’ve already momentum and a following

Jappa: Yeah our merch does well and sells out on every drop and we’re doing our own events and everything.

Objectiv: If you can do things yourself, then you should definitely consider it. No one else is going to do it better for you then you.

DIY! All the tools are there!

Jappa: That’s it. Plus we’ve all studied music in uni, we’ve been raving for years, we’ve promoted parties, we know what we’re doing and we’ve got our eyes on the long term goal. That’s what it’s about mate. Thanks to anyone who’s supported us so far.

Jappa & Lupo – Darkest Night is out now on OCC Recordings