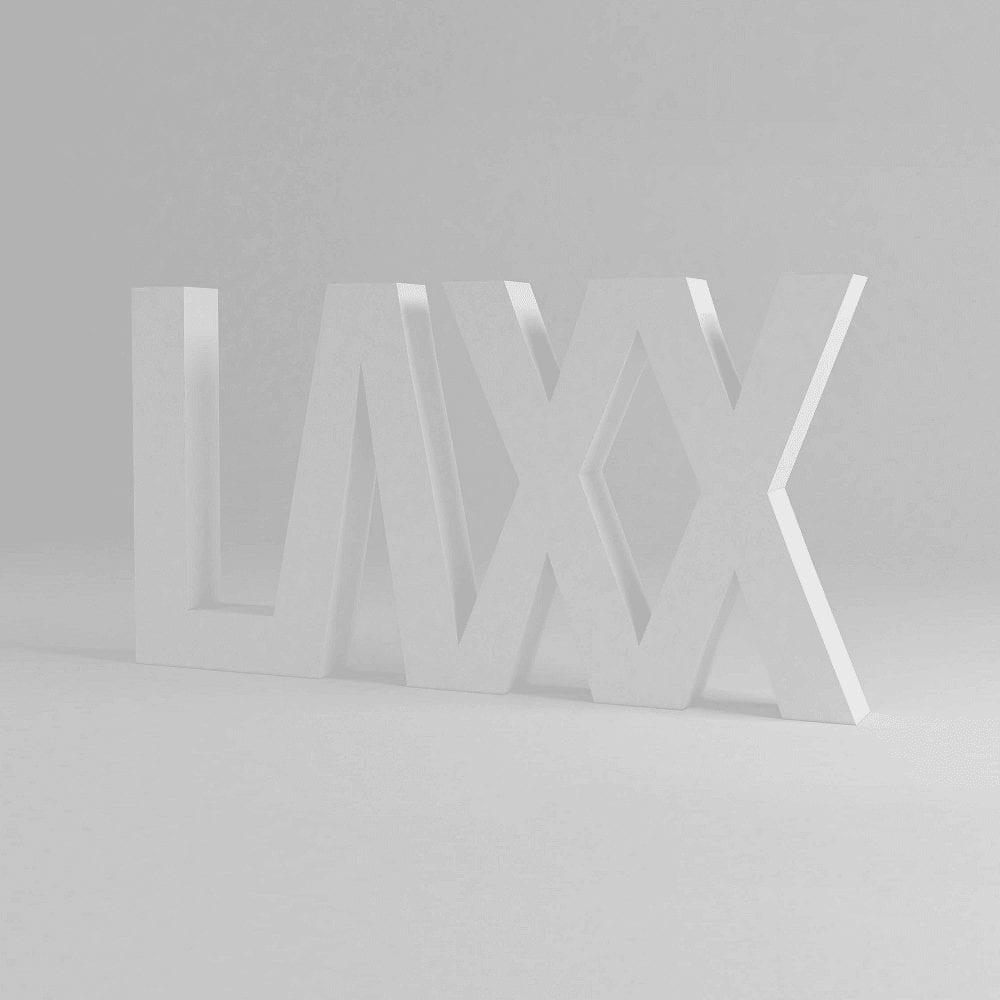 We last spoke to LAXX in November 2015 as he fine-tuned his release. At the time he was developing his genre-jumping signature on Twitch Part 2.

15 months later he’s now based in LA – and has been for a year – and has continued to fine tune his distinctive unclassifiable sound with Hardcore, No Time, Trash, Noise and, as of this week, Playtime. One of the many gully shoe-offs on the immense Never Say Die One Hundred album. Here’s how it goes…

20 fresh tracks from the full Never Say Die and Never Say Die Black Label family, it’s frankly a ridiculous album that punches, slaps, grizzles and groans with chronic sound design and freeform banger dynamism. Total heavyweightism and the perfect way to celebrate a hallmark release for SKisM’s consistent and uncompromising label, we caught up with LAXX to find out how the label have played a role in his unique, twitchy, genre-blurring, ever-morphing signature.

It’s amazing. Things have just gone haywire in the best possible way. Life has changed a lot. It’s beautiful. But the most important thing is I’m still making the music I love.

Bring us up to speed from the last time we spoke…

Well my music has got harder, I would say. Or heavier. It’s got roots in lots of genres and feels really like my own now. It’s somewhere between trap and dubstep but doesn’t feel like either.

I’m noticing a lot of breakbeats. No Time, Hardcore and Trash…

I love breakbeats. They represent where my heart has always been – rave culture. Being born in the UK, it’s an inevitable influence of my environment. Turning on Radio 1 any time in the evening or night you’d have everything… Trance, techno, hardstyle, breaks, drum & bass. The early 2000s was especially exciting for that type of radio. It’s funny, I forgot Trash and No Time had breakbeats in them. I use them more than I thought. I’m working on another track with breaks in the intro.

Breaks are back and it’s a beautiful thing.

Yeah they’re definitely playing more of a role in productions. But I didn’t reintroduce them to my productions for any other reason that I love them. I think that’s been one of the most important things I’ve learnt since we last spoke – not being afraid of what other people think or how I will fit in. Then I realised ‘fuck that!’ You have to make music you love and nothing else.

Of course. They’re so supportive of everything I do. We don’t always agree on things; there’s a fine line between what will work on the dancefloor and what works well in your ears but that’s the creative balance we share. I’m really lucky with be one of their core artists.

What’s your favourite thing about working with Never Say Die?

It’s something that dawned on me a few weeks back when a few of us met in LA. Me, SKisM, Trampa, Megalodon and Zomboy were doing some video interviews and a photoshoot and one of my stand out memories was me and Tommy SKisM talking about how I got signed…

Didn’t he tell you to fuck off?

He wanted to! I wouldn’t send anything to him for ages because I was being too much of a perfectionist. He wanted to tell me to fuck off when I eventually sent him stuff but he checked it and enjoyed it so much he signed me. He also says Step Two is one of his favourite Never Say Die release which is fucking amazing and such a privilege.

Another thing that really stood out to me was how worldwide we are but so tight… SKisM is in London, Eptic’s in Belgium, me and Zomboy are in the US, Habstrack’s in France, Trampa’s in the UK. We’re all over the shop but it’s a family vibe. We’re always talking online and subconsciously competing with each other, always trying to raise the bar. Friendly competition in a non competitive way.

The most important thing about being a crew! I think the Full Cycle story is the best example of that – how they constantly pushed each other for years and years…

Full Cycle was my favourite label for years and years. Size, Krust, Die, Clipz… Absolute classics. If it wasn’t for records like theirs then I might not be making music now.

I have no idea. I would have continued to make music in the same steady way I am now… This has taken me forever. I’ve put out a lot of music, but it’s changed every release with me a little and I think it shows where I came from and where I’m going, but I spend so much time on each one before it comes out.

A lot of the best artists do. Certainly the ones who stick around for the long game and don’t spam with releases…

Obviously times have changed but the exclusivity happens between DJs – I share my music with one or two friends and you might hear something in a live set. Then suddenly when I’ve decided it’s time to release it, bang – it’s happening next week, get ready. That’s the way it works now.

I think the most important thing about the label for me – and what attracted me to it in the first place – was the quality control. It’s so high. From the artwork to the tracks, everything is on point. Also because it’s never been one style of music. From house to dubstep to trap to all sorts.

That’s so important. Of course the roots are in dubstep and when the big dubstep backlash came… It became a cliché word for a bit. But that didn’t stop Never Say Die. They continued putting out monumental tunes that and for that reason their profile is more dominant then ever. They’ve been consistent, ahead of the curve and so strong. They’ve never tried to brand themselves as the biggest and best thing which is important too – they just do their thing proudly and make strong dance music.

How does that motivate or influence you in the studio?

It’s great in one way – I have a team of talented artists around me and huge support from the label. But it’s also bad in another because when I hear the new Trampa EP or Zomboy EP or whoever I just think ‘fuck! These guys are raising the bar’’ I’ve deleted whole project files before because of that.

Who’s inspiring you in that way?

Eptic’s breadth and quality control is matchless. MUST DIE’s sound design is just off the chain – he’s got the real WTF factor with his out-there sounds. Obviously Zomboy, his quality is unheard of. He’s one of the best engineers on the planet and he keeps me inspired. Megalodon is super consistent too – he makes the best headbangers I’ve ever heard. He’s got some real issues to be making that type of stuff. I could go on and on. Basically everyone on the label kills it.

Yeah totally. I always feel I’m on the outside – everyone is so good I don’t think I’m in their league. I’m really hard on myself. More than ever I think. It’s important to not have an ego and get really exciting when the boys come back with feedback on my tracks. Loads of them have been rinsing the shit out of Playtime. It’s always a privilege – I never expect people to play my tunes because they’re a bit weird and they don’t fit in other people’s sets. That’s such a buzz… It’s something I’ve always loved since one of my earliest tunes was played on my mate’s pirate station when I got a shout out. I was buzzing my tits off about that and tried to retain that buzz ever since.

What was the first big DJ to play LAXX tunes then?

Walsh who ran Biscuit Factory was the first to believe in me and encourage me. He pressed one of my early tunes to dubplate and I came down to a party in London with him and it was a rush being in the Scala, London, and hearing my tune in the middle of the dancefloor. Won’t lie… I lost my shit when that happened. Every success – every big show or key support on a release – is still surreal to me now. More now than ever I think. Ever since I came back home from LA during Christmas and I played one of the first clubs I ever played I’ve been humbled. I can’t believe how far I’ve come and I have to shout out to everyone’s supported me over the trip.

It sounds like you’re in a good place right now. Let’s wrap up with Noise For LAXX…

It’s a really mad project. I want to make the world’s biggest open format collaboration. I was throwing ideas around and I always get questions from artists who have problems with their tracks or ideas they want to bounce. And as much as I’d love to help everyone out, I haven’t got the time,  so this is a cool way to work on something with everyone and do it by live stream. I’ve made a website and you can send me any sample. My only guidelines are that they’re sounds from the heart and a place of creativity. It doesn’t matter about quality, it’s about weird noises you’ve made. Riffs, vocals, weirdness, mad rhythm stuff… Anything. So I’ll be making the tune on live stream every Wednesday. It’s quite a perplexing process but it’s coming together and it’s really inspired me creatively. It’s a really cool project – get involved!

Never Say Die One Hundred is out March 10