Robots never lie… Especially if one tells you Mat Zo is a bit of a badman.

Case in point: this hair-raising upload, made for UK movie Robot Overlords.

Heavy, right? We called him to find out more about this track, his love for drum & bass and what’s coming up. We left with some very juicy details. Get to know:

Robots Never Lie = stone cold banger. Would you say it’s one of your darkest tunes?

It’s definitely my darkest released tune. I have a lot of dark stuff that hasn’t seen the light of day. It was one of the hardest to produce because it was so many different styles in one.

Did the fact it was being written for Robot Overlords make it more of a challenge?

No not really it plays out the end credits. It wasn’t part of a sequence.

Have you seen Robot Overlords yourself?

Of course. I had to watch it, and like it, before I decided to work on it.

Sure, you wouldn’t put your name on it otherwise…

No. I really like the tongue in cheek English humour and doesn’t take itself too seriously. It’s a fun movie.

I read you don’t like to rush tunes… Did writing for the movie come with a deadline and create added pressure?

I wasn’t under that much of a deadline. I didn’t have to turn it out in days. It was more like weeks or months. There was a lot of editing to be done, it was about 70 per cent finished so I knew I had time.

Actually my brother used to be a movie and TV editor so I used to see a lot of stuff like that growing up. I’m used to seeing half rendered robots!

I guess as a DJ and producer you have to have a good relationship with your equipment. And I do. But deep down, I’m a bit of a technophobe. I respect the machines but at the end of the day they’re a pain in the ass!

You don’t own an automatic hoover, then?

The robot from Hitchhikers Guide To The Galaxy. I like his attitude.

Yes! Marvin! Back to your relationship with drum & bass. I half expected this tune to be released as MRSA but then saw a quote that you’d ditched the name… And wasn’t a fan of it anymore.

Well it was mainly because I was on Hospital and thought naming myself as a hospital borne virus would be funny at the time. But I stopped doing stuff with them and there was no need. Plus it was pretty stupid name anyway. It’s less confusing to keep everything under Mat Zo.

So nothing forthcoming on Hospital right now?

Where would we find any D&B you’re making?

On albums, on my own label, who knows? I’ve got a few D&B tunes, though. Netsky and I started a collaboration a little while ago. There’s lots of stuff in the pipeline… I love drum & bass.

You enjoyed your teens in the best place for D&B, right? You moved to London then didn’t you?

Yes I did. It’s impossible to grow up in London without being influenced by it. My first ever rave was a big D&B event in Ally Pally. DJ Marky, Andy C, Nicky Blackmarket. It was one of the best times for drum and bass too. So many great tunes at that time.

Mid 2000s was an awesome time for drum & bass. But then every time is golden time, depending on when you get into it, right?

Yes. Everyone looks back at the time got into something with rose tinted glasses because that’s when it’s all new and exciting.

Becoming a producer changes your perspective again, though and you see it the other way round entirely…

Of course. To understand something you have to break it and see how it works and make it your own way. It’s impossible not to make music and have a different outlook on it. You find that excitement in a different way.

Can you shut off that viewpoint when you just want to listen and enjoy?

Yes, but it’s not easy. Sometimes I’ll shut off the studio for a few weeks and I find when I return I’m listening to things completely differently because I’m not picking things apart as much. If you’re constantly working in the studio it’s very difficult to shut down that analytical side.

Sounds like you’re constantly in the studio… Can we chat about any album plans?

Sure. Actually I started one but accidentally started another during that process. So I have two albums in production right now.

Yes. I had this one album that had a very specific theme but then I was writing all these other tracks which didn’t fit with it. So I started putting them into a different album projects.

Completely. Almost opposite. One is really dark and serious. The other is kinda playful and tongue in cheek, almost.

The yin and yang of Mat Zo. Are you thinking of releasing them as a double album? Like Use Your Illusion One & Two? Not sure if you’re cool with an Axl Rose comparison….

Ha! I’m not Guns N’ Roses. But I did think about releasing both albums at the same time. But they’re such different styles it would be too confusing. And one will take a lot longer than the others. Who knows? It’s early for both but I’m really enjoying what I’m making right now… 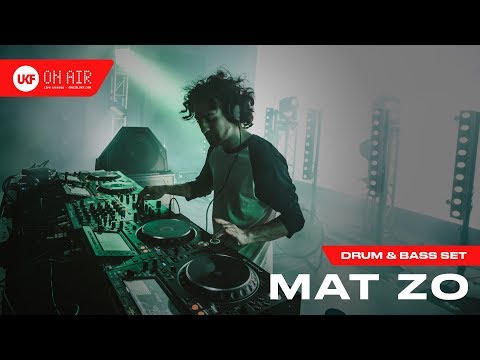 Mat Zo (Drum & Bass Set) live from Respect, LA – UKF On Air
VIDEO
0 shares
SIGN UP NOW & STAY LOCKED!Sign up to our newsletter to keep up to date with the latest streams, news, and events, all tailored to you.