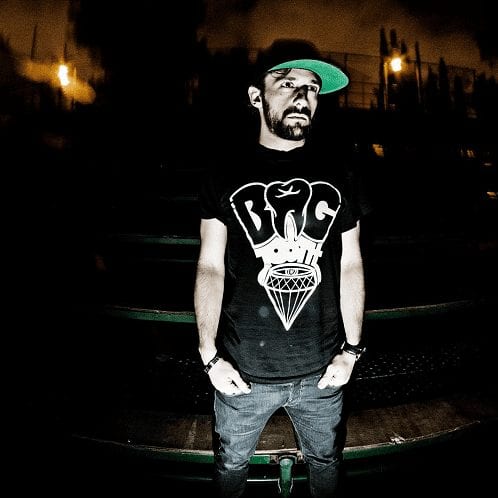 Easy to ask, a little harder to answer…. But that didn’t stop us asking Megalodon. We pretty much had to, really. What with his new EP being called My Selecta and everything.

When we spoke to him it made even more sense… Turns out Megalodon isn’t just passionate about sharks, he’s also a massive advocate of vinyl, reckons ALL DJs should earn their stripes plying wax on the wheels and has a deep seeded passion for the masters of the craft in all electronic selector sectors.

But first, the single. Hot on the heels of the Jauz collab comes his biggest EP in a long, long time. It goes a bit like this…

“I wanted to get some new ideas off my chest and not put them towards collabs,” he explains. “I think people wanted to hear solo tracks so I went in ADD on a bunch of tracks. The only collab is Phase One – he’s so insane, as a producer and as a guy. It’s always cool to hear the new generation doing cool things. He’s fucked with my sound so well it blows my mind.”

And below are another six people who blow Megalodon’s mind. If you’re expecting a list of fellow dubstep selectors then look away now – the Bay area born bass smith goes way way way deeper than his own front porch. Thanks to a UK school friend introducing him to D&B and UKG long before dubstep was even a thing, he’s been preaching at the school of four decks and double drops since before he could even grow whiskers on his chin.

“I grew up seeing DJs do the trance thing, waiting for the last possible cue point and found it all too safe, then my friend introduced me to these UK mixtapes and I’ve been hooked ever since,” he tells us.

“First it starts as trying it out, then you start buying vinyl, then it becomes an addiction. Me and my friends would do those cheeky little timers to see how quick we could beat match. We’d practice practice practice and brag to each other how quick we could beat match. It was an obsession – wake up, mix, go to school, mix, dinner, mix. Vinyl time is the main reason I have any type of chops whatsoever.

“DJing now is a theoretical ideology with a bunch of colourful buttons. With vinyl it’s so logical – put the record down, put the needle on it and find that first fucking beat. No cueing, no pressing play, you can feel that beat in your hands.”

“Do I have to say any more? A four deck vinyl wizard… Watching videos of him going back and forth on four decks while Goldie is in the background losing his head was the biggest inspiration for me back in the day. I grew up on that shit! All those play-it-safe trance guys were ruling over here then you see this motherfucker drop something on top of something else on top of something else. All those little cock tease mixes he’d do and then booom…. Two more tunes lock in. How do you even do that on vinyl? If anyone tells me I’ve influenced them as a DJ I point them in the direction of this man. Everything I do, or try to do, is a homage to this man.”

“This man has dubs beyond dubs. He’s got Maniac dubs I want so much! He represents grime so well, he’s a breath of fresh air because he’s got the charisma to front the scene on Kiss FM but he’s also got the technical chops; he can double drop records while MCs are spitting and rewind the double drops. Silencer tunes on top of a Maniac tunes… Oh man.”

“This man does the homage properly. There’s a fine line between laying down double drops and actually creating proper unique experiences as a DJ. Those ideas that come in from nowhere and all the little references – and done so tightly and with such speed! Every time I watch this man on tour, I can see him like six or seven times in a week and every time I’m standing there like ‘what the actual fuck is going on?’ He blows my mind every time… Especially those beautiful special moments that happen purely on the spot.

“I’ll never forget when me, MUST DIE and SKisM were touring and SKisM hadn’t set his clock back so he thought he had enough time to set up his Rekordbox but he was actually on in 15 minutes. He did this one mix that came out of nowhere – it had me and MUST DIE in stitches the whole night. He dropped OT Genasis I’m In Love With The Coco and then suddenly my tune Platinum dropped. It happened to be in exactly the same key and the mix was so perfect yet so horrible at the same time. That’s just one example of SKisM perfection.”

“Okay so he doesn’t mix records technically but bloody hell he knows how to drawer some! And he’s got versions like no other. I regularly pull up his clash with Poison Dart in Antigua and show the boys. He’s an education for a lot of people who don’t understand legendary systems like the Stonewall and just the huge influence classic reggae has influenced pretty much every electronic music we love. Rodigan is a teacher. It’s as simple as that.”

“I’ve played some shows with him and he’s so dope it’s unreal. He actually makes me look tall too which is pretty cool – it doesn’t happen very often. I’m like damn you’re gangster and you’re short! But watching him do his MPC stuff is really sick. It takes a lot for me to say this as a vinyl purist. In fact it goes against every single one of my principals but he really does fucking kill it.”

“This might seem random and out of the blue but I’m good friends with the Judge Jules camp and I have a lot of time for this man. He’s a lot more technical than you’d think and he’s an absolute legend. He’s one of those guys who’s got his shit locked down in his territory. He’s got a big following in America but we’re lucky if we ever get to see him over here. He’s an old school don. Same for Carl Cox. I don’t drop these guys in the car and I don’t frequent Ibiza but given the chance I’d check out Jules or Coxy every fucking time yo!”