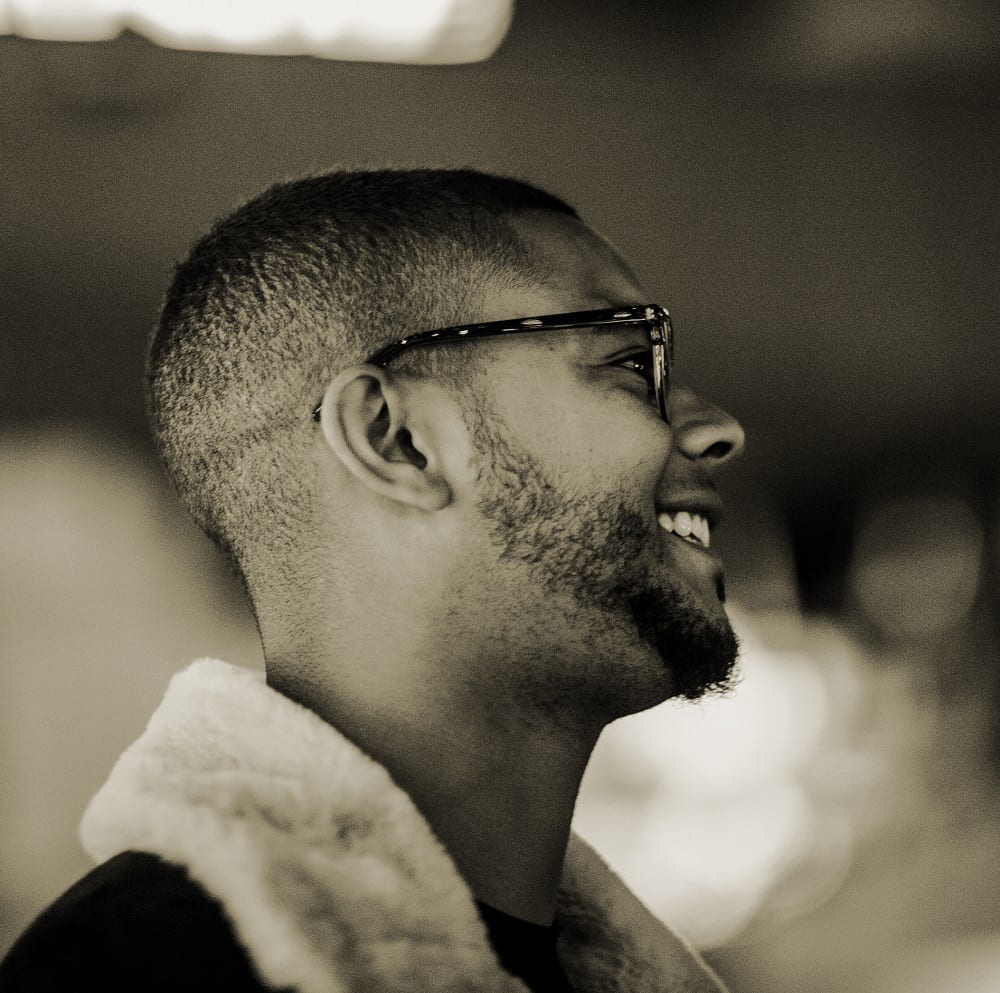 No one could have predicted the rise of Degs. Especially not the man himself.

Even as recently as 2017, had you told him he would be signing to Hospital and releasing a debut album that’s partly produced by himself and features likes of LSB, Logistics and Pola & Bryson he wouldn’t have believed you.

But that’s what makes his story so much more endearing; after 10 years of chipping away at the jump-up MC circuit and honing his skills as a writer and multi-instrumentalist – all the while holding down a range of shitty jobs in order to survive – now in his early 30s, he’s really come into his own. Not just as an MC but as a singer, a writer, a performer, a DJ and a not-too-shabby producer, too.

His debut solo album Letters From Ndegwa is proof. Ranging from bumping neck-snappers to glistening contemporary soul, the album was released late last month on Hospital and it’s one of the most comprehensive, ambitious bodies of work an ‘MC’ has delivered in drum & bass. Apostrophes necessary; Degs is much more than an MC and his album is a serious statement of creative intent. Its release is pretty timely, too; an album shining with positive ideas, stories and honesty, it’s a great distraction from the socially distanced world outside.

As the lockdown longness continues, and the weather outside seems to be taunting us cruelly, we called up Degs for a little positivity…

What a mad time to be releasing an album! I guess, on the plus side, people have more time to sit down and properly listen to it…

It’s very surreal. The very nature of me releasing an album on Hospital Records is surreal enough for me personally but yeah. Strange. World events have been so fast-paced we think about various different ways of getting it out there and promoting it during this. So much hard work from everyone has gone into this. The release was locked-in a long time before all this so we’re just dealing with the situation. But sure, one thing that’s certain is that people are locked into their Spotify, their decks, their phones, their iPads a lot more. There is more time to listen to music and people need music more than ever right now. I know I have. Just listening to the Weeknd’s new album has lifted my spirits up this morning, for example, so we have a duty to get music out there if we can.

Amen! Weird times. Sounds weird but it kinda consoles me that we’re all going through this. This is something the whole world shares and as things have been so divisive over the last few years, that seems poignant to me…

Yeah covid-19 doesn’t give a shit about your politics, about borders, about whether you voted in the referendum, it doesn’t care. Another positive about it will be the amount of dubs coming out of people’s studios in a few months time! People have nothing to do, they might as well be in the studio making next level things. So when we see this out – and we will see this out – we will hear some incredible music.

Definitely man. People will be coming up with some very interesting things. We’ve got to take any positives we can get from this. And being able to stretch your creative scope is a very big plus. And in the meantime we need to stay together, stay united until that explosion of culture. Something seminal is going to be written while this situation unfolds, I can’t wait to hear it.

Same. Let’s chat about the album. Take us back to its beginnings…

It goes back to August 2018 when we dropped the mixtape. After that, we sat down and mapped out the path. We set up a Dropbox and I was encouraged to just go out, write, collaborate, put down ideas and just have fun. At first this was me collaborating but then Hospital asked if I could produce. I told them I could but only at a very basic level, so they gave me the resources I needed to. Obviously I could talk to some world-class producers on the label. They knew I had a grasp of musicality and top lines and arrangements, but it was a case of whether I could articulate them in a polished enough way to slay the dance. So yeah, a lot of this album process has been about me learning new skills which has been really fulfilling.

I really was! I had no idea my debut album would include the likes of LSB, Pola & Bryson, Unglued, Logistics, S.P.Y and more guys I really rate and respect. It’s crazy to sit down and work with those guys. When Carlos S.P.Y, for example, said he was up for working with me that was incredible. I didn’t think he’d even know who I am! This album was a massive learning process for me as a musician, as a producer, as a lyricist and a songwriter but particularly as a human being. I pushed through boundaries I didn’t know existed. A year ago, for example, I’d never have done an hour and a half mix to crowd of people. All the respect to Hospital for the motivation, particularly in a personal development context.

Amazing. Speaking of personal… Ndegwa. Is that your family name?

Ndegwa is my middle name, my Kenyan name. My mother comes from Ngriambu in central Kenya which is a very small village. Her heritage is very important to me and something I’m very inspired by so the idea of the album being 14 different stories, different streams of consciousness and messages seemed really fitting to the concept and a good way to describe the album.

What was the hardest message to real nail?

A lot were. When you’re talking about something that’s happened in your life, especially if it’s had a negative effect on your consciousness then it can be hard to talk about. Sometimes I found I was watering down what I was saying, so it would be more ambiguous and people wouldn’t relate it to me. But then I thought ‘no, that’s not who I am or what I want to do.’ So I removed the ambiguousness and focused on making sure it’s a very honest album. I won’t go into the stories because I want people to listen to the album but there are a few songs that went through this process where I questioned whether I exposed myself or if I should keep a mystique about it. But mystique is not my thing. What you see is what you get.

There’s one song, Trade Places, which always stuck me. We’ve all had – and many still have – really frustrating soul destroying jobs. I’ve found a lot of the artists I interview who have had shitty jobs are much more appreciative of the position they’re in now…

Definitely. One of my previous jobs was for Sky. I was sold the job on misleading circumstances but ended up being a glorified bailiff and I hated it morally and ethically. Getting up every day, doing the long hours, not wanting to be there  but knowing no other way to pay the rent. Trade Places is a great example of how much I value and appreciate my job and what I do and I’d never trade places with anyone. Especially because I feel this opportunity came a little later in my life and it felt like now or never. Time is always of the essence but particularly when you get to 30!

Absolutely. I make no bones about how things have worked for me. I hate calling it a ‘rise’ or ‘come-up’; it was a mixture of hard work for 10 years and a good amount of luck. I happened to put out some spray-out videos, using social media as my vehicle and they got picked up. I’m very lucky that the way I chose to promote myself at that time was the most effective way possible at the time. It created an opportunity and I went for it. But the message is, as always, that the time is now. If you have any creative feeling or urge then you need to encourage that and feed it and make sure you do something with it… Because you don’t know when you’ll get the opportunity to do something with it.

Where can we hear your productions on the album? Driving Under Lights, 4 Days, Killer, Pamoja Forever?

Yeah that’s right. All the tracks where a collaborator isn’t credited would be me. Actually Driving Under Lights was suggested by the label A&R Tilo as the intro track but I didn’t want a production of mine to be the first track on my album. I didn’t think I was good enough! Having that as the first track is still quite mad for me to get my head around. Also the last track Pamoja Forever took a long time. It’s important to me about what I translate about myself and this one discusses my Kenyan roots. Pamoja means ‘together’ and the song is about how I think humanity needs to come together. I was very happy with it and still very surreal to have my own productions which I’ve started from scratch on the album to be honest.

Totally man. It’s beyond what people might assume to be an MC’s remit…

I have to give Hospital shouts because they’ve pushed me to do this. And listening to the album now, there are already things I feel I could improve on for the next album. I’m sure every producer can sympathise with that. It’s something I look forward to doing a lot more of. And then hopefully I’ll be able to bring a keyboard and guitar and other instruments into my live performances. It’s exciting being with a label who understand that and want to see that too. I think people’s understanding of what an MC can do is very limiting sometimes.

Totally! The best MCs are songwriters and musicians!

Exactly. Rapping and singing are a small part of what I do. I know so many vocalists who have those skills and can play different instruments or produce incredibly well. Have you heard SP’s dubstep productions for example? There’s so much more to this artform and if I can be part of that evolution and help people appreciate that then that’s another massive positive for me.

It is! Now is the time to focus on what you want to do. You have time to improve your skills, learn about your kit more, learn more about style, your skills. It is a great chance for people to up their quality game. Yeah it sucks, we’ve lost a lot of gigs, a lot of us don’t know where our paycheques are coming from next but we will get through this, we’re a pretty strong country and resilient human beings, and I think we will eventually benefit from the positives we can take from this.

Benefit from Degs: Letters From Ndegwa is out now