Disrespect covers a wider take on the bass-gerne and features some pretty big collaborations, too: Vulgatron, Killa P and Nolay bring lyrical support while NSD heavyweight Space Laces is also present on Shank.

The album is a shift for the tattooed artist from Peterborough. A chance to finally flesh out ideas he’s been brooding on for a long time. Given his trademark sound, honed over a dozen years – craftly leveraging him onto the biggest stages in the genre– a healthy dose of letting go was called for. Very much to his own delight nonetheless.

We caught up with Rikki to reflect on the end result, his approach to tackling the process, and what this new direction means…

Please tell us more about the conception of the album. When did the idea come about and how did it go from there?

Somewhere in the middle of last year (2020), the idea came about. I had a lot of ideas laying around, lots of which haven’t made the album. I was working on a lot of different genres and tempos. The lack of shows and feedback from the dancefloor helped shape the creative process.

From concept to completion, it’s been more or less an eight month process. I always had the idea of eventually making an album. I have never been really good at writing music on the road, so it was perfect, really. For a lot of people ,the lack of shows has been uninspiring – but for me it’s the opposite!

Has getting into a routine been a big contributor?

Yeah, I’m waking up and going to bed at a certain time – it’s a nine-to-five job, so to speak. Of course I miss playing shows more than anything, but I didn’t have to think about where I am going next, or what I’ve got to do to prepare for the set. Having the time to write music is obviously reflected in this album.

How are you feeling about putting it out there?

I am happy with the support it’s received! It’s been a long time coming. Having constantly released EPs and singles – predominantly dubstep – I wanted to make a bigger body of work to showcase some different sounds and genres. I’ve think I have done that pretty well with this album and I hope fans enjoy the new ideas.

How do you get into that creative flow? Do you just get started or have a ritual to get there?

It was my manager’s idea to make it a nine-to-five routine. Before, if I would feel inspired, I would get straight into the studio to write music. But when I wasn’t feeling inspired, I would do the total opposite. As soon as we decided on the album, I made a conscious effort to make it a 9-5. I got up in the morning, ate breakfast, and went into the studio. I would switch off any distractions; facing my phone upside-down so as not to look at notifications. I unplugged my Xbox and hid the wires so I couldn’t switch over and play! (laughs) As stupid as it sounds, these little things helped me 100 percent. The rewards at the end of the day felt even nicer.

Was it a challenge to work on different genres like this?

It wasn’t too much of a challenge, because I have always liked to experiment with other genres. The difference is that I never released any of it. 99 percent of the music I release is dubstep, but it doesn’t mean I don’t work on other styles of music.

Which track really stands out for you personally?

It’s not my favourite track on the album, but the one that really stands out probably is All Night with Nolay. I just feel like it’s completely different to what I’ve made or released in the past. Working with a female grime MC from the UK – it’s something I’ve never done, either.  A lot of my inspirations from growing up shine through. It’s got The Prodigy vibes and breakbeat vibes – both of which I grew up with and wanted to showcase to my fans. All Night does that perfectly!

How did you link with Nolay?

I wish I had a cool story for it, but because of Covid it was actually pretty difficult. Under normal circumstances, we would just get in the studio together and that would be that. But this time, there was a lot of back and forth over Instagram, voice messages and stuff like that. A difficult process writing, but I think that it came together well in the end and I am really happy with it.

Is this broader approach something you will continue in the future?

100 percent. The way the response to the album has been so far, a lot of praise is for the tracks that are completely different to the stuff that I usually make. Of course, I want the fans to be happy, but first and foremost I want to make the music that I like. If people like it, then that’s a huge bonus. But yeah, I will definitely be working on a mix of different stuff in the future. It’s not gonna end there, that’s for sure.

You’re talking about the reception of the album. Do you mean fellow producers, fans, or both?

Bit of both really. With how the internet is these days, if you were to go out and read every single comment, of course there are going to be some bad comments. I take on the constructive criticism for the most part. But as far as I’ve seen, 99 percent of the response has been great. It makes me really happy! Seeing fellow producers praise me on the album is obviously nice to see. Like I said earlier: I make music for myself foremost. But of course, if other people like the music that’s a huge bonus for me. I will always bear that in mind.

When looking back at the project, what were the most valuable lessons?

Not to ever force yourself to make music you don’t want to make. I know I said that I treat my work as a ‘9-5 job, but luckily for me the inspiration behind it has always been there. I had all the time I wanted to write this music – I wasn’t rushed in any way. I never wanted to put tracks on the album just for the sake of it – I took my time and honed in on what I truly wanted. So the most valuable lesson is to not rush your writing process or force ideas if you don’t want to. Let it happen naturally.

What often overlooked aspects of producing would you advise on?

I feel like there are a lot of up-and-coming producers that feel like they have to follow a common rulebook for making music. But the thing is: there are no rules in music production. Sometimes, things can sound too polished which can take away a lot of character from a track. It’s all good knowing your mixdown techniques and production skills, but your track has got to have character. I’m not the most technical producer in the world – I haven’t got thousands of pounds of hardware and software – but I’ve always prided myself on the fact that I know a good track when I hear one and I know what sounds good. If it sounds good, that should be the most important thing. Trying to polish something until it’s unrecognizable is a mistake that a lot of new producers make.

They are overcomplicating stuff.

Yeah, in simpler terms. They’re perhaps doing things that don’t necessarily have to be done. And they feel like they have to, because of this sort of made-up ‘rulebook’.

Is it also a matter of sticking to a somewhat simple toolbox?

Getting those fundamentals down to start with – that’s one thing I enjoy about Reason. It allows me to put down ideas simply, and then I can build from that. I feel like the music I make (and dubstep in general) still needs to retain that rawness. It doesn’t necessarily need to be overproduced.

Any shoutouts to conclude the interview?

A shoutout to NSD first and foremost. Also a shout out to my manager Dan – he helped with everything and kept me sane during the writing of the album. A shoutout to Tommy (SKiSM) for being there, as well. Another huge shout out to my fans for supporting me over the years, and still supporting me now; new and old! The Trampa project is about eleven years old now. I still see fans from back in the earlier days commenting on my posts. We’ve all come a long way. And of course, a big shout out to UKF as well.

Trampa – Disrespect is out now on Never Say Die 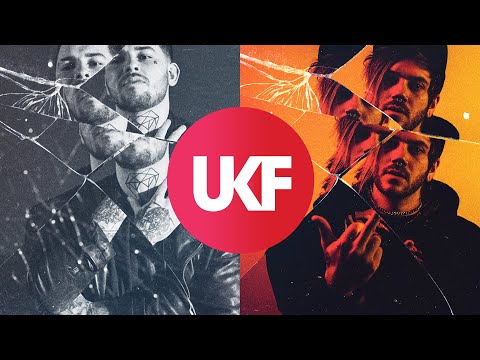 Trampa & Space Laces – Shank (MUST DIE! Remix)
AUDIO
0 shares
SIGN UP NOW & STAY LOCKED!Sign up to our newsletter to keep up to date with the latest streams, news, and events, all tailored to you.