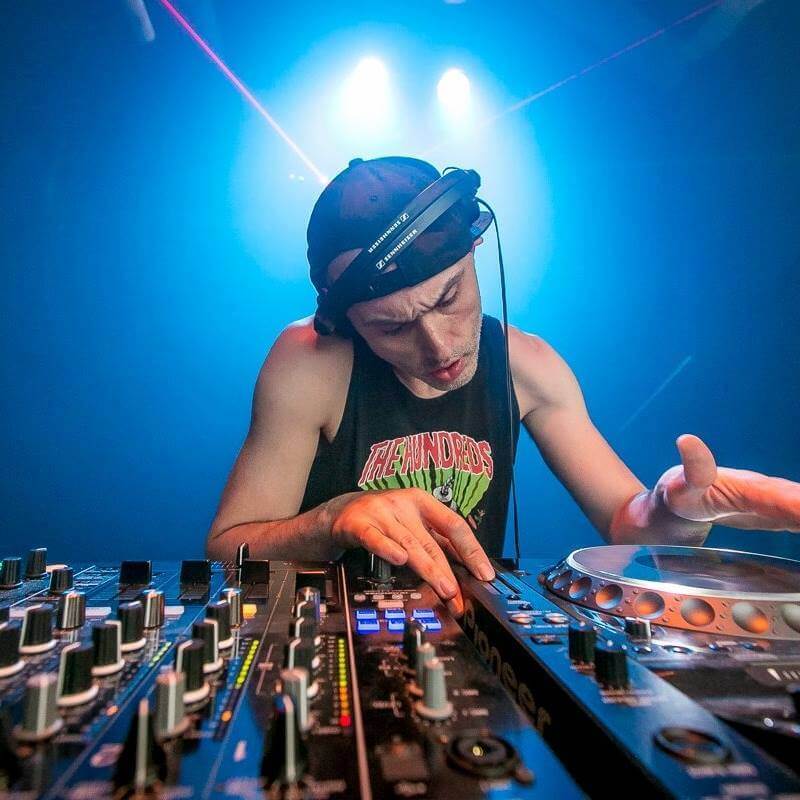 The name NC-17 has become synonymous with Viper Recordings over the past few years, but this Toronto-based D&B producer has actually released on a staggering number of labels over the course of his career. From the big guys like Renegade Hardware and Symmetry to Circle and Mac II, NC-17 is a name known to many.

With a career that’s covered over a decade by this point and a new dual single out on Viper, it’s high time we sat down and chatted to him. We found a producer whose musical style is reflected in His words and thoughts about D&B. He loves the groove and the vibes of golden era jungle and drum and bass and he sees his music as nothing more than trying to create those vibes in his studio. Whether it’s Viper, Hardware, Symmetry or miscellaneous, NC-17 just wants to create the music he loves. Read on to find out how he does it.

I think a lot of people are starting to think of you as a Viper only guy you’ve got a history with other labels as well.

Actually I started all the way back in 2006. My first release was actually on DSCI4 recordings, in the time pretty much everything was released on vinyl. The tune was called Slug Path and it got a lot of attention but it wasn’t until Andy C was playing it that I got noticed. I was stoked already that I had a release on a legendary label but I thought I was dreaming when word got out Andy was playing it.

From there I got more attention; not sure if I was 100% ready but it basically got recognized by other labels like Renegade Hardware, Circle and Mac II. It wasn’t until about 2009 that I had my first Viper release with Just Heroes and The Keep. Between then and now at one point I’ve been lucky enough to work with most labels in the genre. That’s goal I was working for since I started. I definitely feel very fortunate that labels dig the sound I am pushing.

Dare I ask who has been your favourite label to work with?

Very very tough question. For me honestly I feel Viper Recordings and Renegade Hardware are my two favourites. Viper because I’ve had a long relationship with them and have been able to grow as an artist. Bren (Futurebound) was always very receptive when it came to feedback but he can be super picky which is good. I also get along with the whole staff including Bren I have even known Jamie (Matrix) for a very long time.

With Renegade Hardware, I’ve had a lot of people believing in my sound but Clayton and Giles (Ink) were the first to wave the NC-17 flag. They would bring me for shows over for their legendary night and even had me play main room at five am on the last Hardware event. Growing up, there were kids who were the Virus guys or other kids who were into Metalheadz but I was the Renegade Hardware guy. I legit bought every Hardware release from the first to the last one. I even remember as a kid in 1999 pretending I was playing Fabric in my room DJing while MC Kendall was MCing over my set. Hardware always gave me a lot of creative control and let me thinking outside the box.

So the new release City On Fire/ Mr Saturday Night is on Viper of course, as the majority of your releases have been lately. What about your sound really jives with them in your estimation?

Well I will be honest; what’s really cool about working with Bren is the stuff that I make is not usually what people consider the Viper sound and I think that’s what really cool about Viper They are just all about good music. I mean if you look at my catalog on their label, you wouldn’t necessarily think Viper. There have been some tracks that I would make and I would say to myself, ‘I’ll send this to Bren but he probable wont dig it,’ but then it turns out that he does. If they are feeling something no matter what style Viper is willing to take risks that some labels won’t.

So in terms of your sound and it being diverse, do you have a way you would classify it or a way you like to approach writing tunes?

I get easily inspired because I generally draw from a lot of other areas and other art forms. Film is a major one, for example. I graduated university with a film degree so cinema can be a major inspiration. As for writing I’m very big on letting the basics do the talking. Letting the little nuances move and tell the story of a song. I usually look at how music was written in the golden age of D&B and see what worked then and try and use the same methods today.

I think sometimes producers get too caught up in how loud a snare sounds instead concentrating on the actual vibe and soul of a song. What makes our genre so amazing is that we can color outside the lines and sound raw because it’s urban roots. One of the main reasons I think drum n bass is as avant garde as you can get when it comes to the electronic genres.

I’d say if there’s one consistency in your sound, classic D&B style is it. What is it that draws you to that OG sound?

What I love so much about that era from ‘96 to ‘02 was that it was strictly vibes. It wasn’t some big engineering contest or the person who could have the biggest drop or even and the person who could do the coolest switch or edit. It was strictly driven by the soul of the song with little nuances like percussion or fx progressing the song. They let the basics do the talking. There was a rawness that could not be matched. It reminds of cinema from the 1970s; that was the era of the director. You saw cutting edge films that were very raw but still work with a contemporary audience

So in the modern era with all the new subgenres and lots more engineering capability, how do you like to work to get similar vibes?

When I sit down I am very big on just jamming. I never sit down thinking I have to write a certain style or vibe or finish some thing or hand in something to a label. I try and make the experience as stress-free as possible. I am very big on getting into a flow state when writing so I will write a lot of sketches and ideas and try not to overthink things, especially when starting new songs. I try to embrace the creative process with its highs and lows, knowing that sometimes it takes 10 or 15 tries before you get that one good one.

So it’s more about jamming and vibes than necessarily coming out in a certain style?

Yep. Anything that’s rolling and I can nod my head to. If I can’t listen to it in my car and nod my head then it’s not good so really for me it’s all vibe.

Do you ever start with a sound in mind that you want to create for a certain track?

Yes and no. Sometimes I’ll have a plan but then I can go in a totally different direction and other times I’ll stick to the plan. It really depends on where I can take it. I try and let things happen organically.

So how was the process for these tracks?

Well with City On Fire I actually contacted Steve Replicant and said I was a fan of his work. We said one day we should work on a collab. He sent me a clip and I kinda had an idea on where to take it. He gave me total carte blanche on the song and luckily he was very happy with what I came up with. Working with Steve was a great experience. As for ‘Saturday Night,’ I just said hell with it I wanna make a circa 2002 hard tune I was lucky enough to bang that out in a very short time. They say those quick ones are the best and in this case I think it was true.

So how did you go about making that style and vibe on Saturday Night?

Once I was able to make a break in where it had that feel, getting a B line came very easy on that one. It was a very good experience. I was sampling a lot of old house records for fx and vocals.

What’s coming up next for you?

I have loads coming up next with much more releases on Viper, Chronic, Renegade Hardware, Universal Project, Hospital, 36 hertz, LionDub, Innerground, Dread and much more. I have been super busy.

Are you planning on touring again soon?

I’m honestly not sure when, but soon. I actually stopped taking shows because I wanted to elevate my music game. I was feeling like I was becoming a journeyman I took a year off and just basically cut out the outside world and concentrated on getting better and gaining confidence with production.

I felt like I took a risk and it paid off. I think it’s up to every artist how much time they want to put into it. I think to longevity in this game is being humble & having a good work ethic. Things move quick in this game so it’s best to keep your head down and concentrate on your craft. So after all that, I’m slowly coming out of my cage and saying yes to shows here and there.

Anything else going on?

I’m trying to do a little mentoring and helping other producers. I think it’s important to help guys coming up because I was that dude once and if it wasn’t for certain guys taking the time with me I doubt I’d be in the position I am in today. The people I mentioned here and so many others. You know who you are!