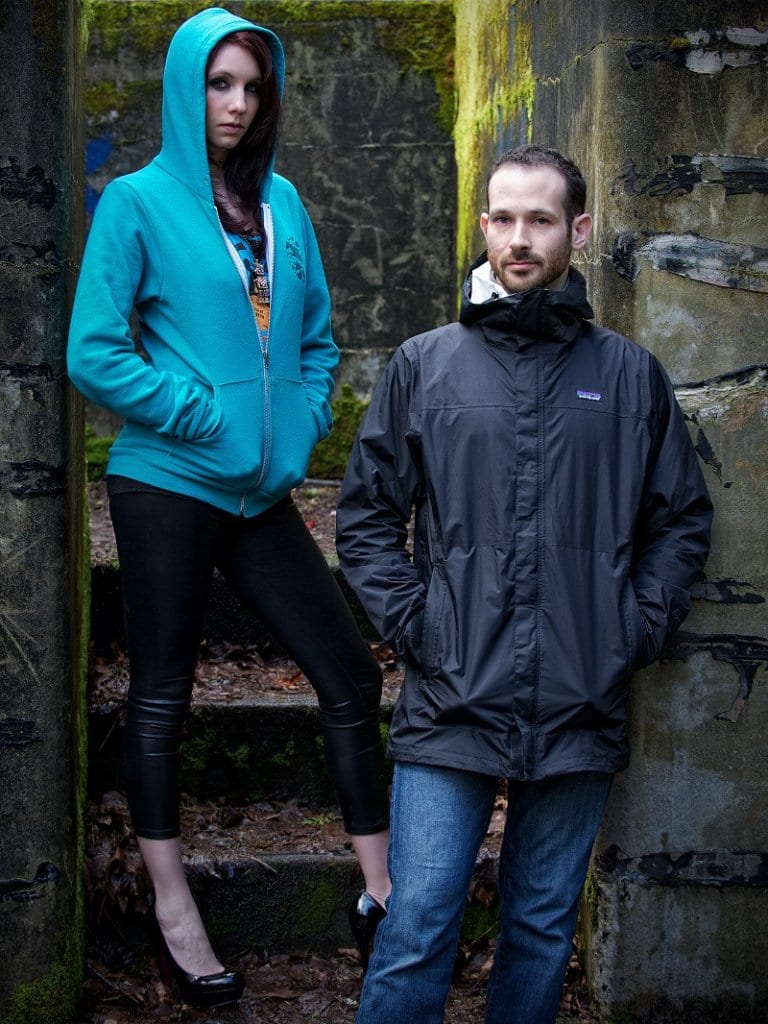 What a month it is to be a Quadrant & Iris enthusiast. Not one, not two, but three big gritty dispatches have been fired from their marital Seattle lab in recent times. More is expected to land soon.

A new fire sparked from the smouldering embers of their Calculated Risk EP on Dispatch and their Collette Warren collaboration on Innerground last year, 2019 has been the most consistent year Leigh Quadrant and Karen Iris have had since they released 206, their Commercial Suicide-released debut album fellow Seattlite Kid Hops.

The action kicked off at the start of the year with a collaboration on Dabs’ album Wormatic, then Leigh apppeared solo Sofa Sound with Offset. Now come three more big weapons: Intuition (with Ulterior Motive on Guidance), a Jackie Edwards remix with Kid Hops on the Hospital Meets Jet Star album and a heavily-supported bootleg shakedown of Wiley’s Boasty which you can grab right here.

Each cut popping with their signature techy roller aesthetic – a sound informed and inspired by the OG neurofunk and techstep DJs their local institution DNB Tuesdays have famously imported to the states for the last 21 years – the recent releases mark the start of a new chapter for the couple. As they explain themselves, their music factory is once again warming up… And their persy dub stash is looking nice and healthy. Here’s where they’re at…

A track on the Hospital Meets Jet star album, an Ulterior Motive collab on guidance, a popping bootleg. This all seems like good timing?

You’re out of control when things drop aren’t you?

Quadrant: It’s true, unless you run your own label you don’t have control over when things come out. You can’t be strategic over it. Sometimes it can be as long as two years later.

Is that the longest time you’ve waited? Which one?

Quadrant: We’ve had stuff bubbling for a few years quite a lot. Sometimes it’s totally down to us. We might have an EP and we’re making that elusive final track. Or you do a tune and the label turn around and say ‘lets do an EP! Give us three more tracks!’ It’s like ‘okay, that’s going to happen overnight!’

With the Jet Star release, were you given a choice of track to remix?

Iris: Kyle Kid Hops was orchestrating a lot of this and he was on it for a while. We talked about it a lot and it finally happened. He’d already picked the tune and it’s a great choice. Plus, he had the King Tubby dub version to play with, too.

Quadrant: Kyle is super versatile and has such a great musical vocabulary. He was perfect for this: he does a weekly radio show dedicated to island and reggae music every Saturday morning. He also does Expansions with a few other DJs.

We need to chat about Guidance…

Iris: Definitely. Everything on the label has been incredible. We spoke to JD and Greg at Sun And Bass, and JD said they’d be coming through on tour. He wanted to swing by for the day and make some music. He made it happen.

Quadrant: He rearranged his travel plans to spend a day writing tunes with us.

Iris: It’s crazy he wanted to work with us enough to change his schedule.

Is that pressure? You just have one day and sometimes things just don’t flow…

Quadrant: Totally. You have to prepare. We have people coming in from out of town quite often so we arrange ahead and don’t have obligations on that day. Also a lot of pre-work: getting your drums sorted, your samples, maybe a skeleton of something already running. JD is great to work with anyway; we all have shared interests in certain aesthetics and we’re excited by the revival of the old late 90s neuro sound. We did that tune with DLR – Ghostfish, Ulterior Motive are on it, Kid Drama too. We wanted to explore that tip and knew where we where heading. JD is a great studio orchestrator too; he keeps things moving creatively. It’s a skill you build up over time and something we relate to as collaborators ourselves.

That’s why he’s working with Goldie!

Quadrant: Exactly. You can’t sit in a tunnel EQing a snare for an hour, you can come back to that, you need to keep the music moving and developing the track.

Yeah it’s fine balance isn’t it. You mentioned the Headz tune – Anthropocene – that was your first release but I reckon you two were dabbling in the studio for a lot longer?

Iris: That was the first tune we ever made together. Leigh was making music for years before but that was my first.

You were together for a few years prior to this though….

Quadrant: Karen was DJing a lot more, we just hadn’t talked about it. I can’t remember who suggested it.

Iris: Yeah you told me I had to get into the studio.

Quadrant: I’ll take credit for that, then! But it worked really well, and we found we could work together.

You didn’t collaborate until you’d been married!? Studio fall-outs could have led to divorce!

Iris: We did butt heads over that bassline.

Quadrant: The very first bassline I wrote for it, she said, ‘That’s crap!’ I was like, ‘What do you know?’ But I did a different bassline and Goldie signed it. But to be honest it was pretty low pressure because it wasn’t the foundation we built the relationship on, we’d travelled and knew we worked together well under pressure or in stressful situations.

Iris: And we’d put Ikea furniture together. After that and travelling, the studio’s easy!

Ha! So your first ever collaboration landed on Headz. What a start. Did that set a precedent or benchmark for you?

Quadrant: After that we started getting in the studio more for sure. We were just making music we wanted to hear. Then, around 2012, Kyle started coming over for a studio session every Wednesday. That was a good four years with those sessions culminating with our 206 album. It was a great studio cadence; like a lot of work over a long time. Villem and Bcee have the same with Vanguard Project. They’re dialled into that notion that it’s a marathon, not a sprint. We also got more involved in the Seattle music scene with guys running the labels and nights like DNB Tuesdays.

DNB Tuesdays is an institution

Iris: Yeah it turns 21 in November.

Quadrant: It’s old enough to drink! But testament to the core people in Seattle who’ve stayed interested in it for all this time. Kelly Demo especially.

There are quite a few Seattle-based producers. Homemade Weapons…

Iris: Demo is still killing it with his Root For The Villain footwork stuff, D-Struct, Klippee, Sixfour. All those guys have come up here and really blown up. There’s a lot more producers here now. But Kelly and Kyle were the founding people for pioneering drum & bass here. They brought in the people, the line-ups, the headliners and put so many people on to it.

Quadrant: Kyle worked in a record store in the mid-90s and sold Kelly and his 360BPM partner Zach their first jungle records. He’s been on this since before day one. When they first started that night they brought all the big names through – Konflict played, Goldie & Doc Scott played, Fierce.

I can hear all these people in your music. This is where you come from! Kelly and Kyle have aa lot to answer for here.

Quadrant: They do indeed. Klute once called me a Wormhole Baby.

There’s the headline! So where’s the US at with drum & bass from your perspective?

Iris: What’s hard with America is that it’s so much bigger. You can have these little pockets of scenes that are so strong. LA, Denver, San Diego, Seattle. Then you’ll have these other little pockets with occasional one-off events. It’s very hard to travel on a weekend to a night. It depends where you live.

Quadrant: It’s always on a knife’s edge too, right? A good scene in a city could be the result of a good promoter who picks up some good tours and books the right people for a few years, builds a scene but then gets another job or just stops promoting and there’s no one behind him to pick up the slack. Portland for a while was flatlined even though there were great promoters working there. For whatever reason the regular weekly stopped but now it’s thriving and they get shows we don’t get up here. So when people ask about drum & bass in the US it’s kinda like asking ‘how’s the scene in Europe?’ Well Brussels is kicking off right now. Maidstone is a bit of a hotbed.

Haha. I think when you’ve got these little local scenes you have a community. I know you guys love Toulouse…

Iris: Oh the Bikini is one of the best clubs in the world.

Quadrant: Totally. I mean look at the size of the town compared to the talent that’s there. It’s unreal.

Iris: It helps when you’ve got a venue that has a soundsystem you can play drum & bass on. One issue we have here is the soundsystems can’t hold the bass and that hurts the music – it’s made to be heard through a big system.

That sucks. So where in Seattle can I find a good system?

Iris: Right now it’s either at Re-Bar where Tuesdays are now at. Monkey Loft has a good one, Substation has a good one. We’re okay for systems here.

Quadrant: Nothing that will blow your dick off though! Seattle’s soundsystem culture has thrived in spite of the lack of good systems here. Not because of it.

Iris: We’ve just given an EP to Klute for Commercial Suicide. We’ve got a tune on Philth’s album.

You were on Dabs’ album too earlier this year…

Quadrant: Yeah that’s our new role now, we just play cameos on the Dispatch albums. It’s what we do.

Haha. Are you inspired to make another album or too soon?

Quadrant: It feels like it wasn’t so long ago but it was four years ago now. We are ramping up the music factory again, though. After 206 with Kyle, Karen and I had a kid so we stopped writing for a year or so. But now we’re building things back up. Slowly but surely.

Iris: We’ve been telling people the Commercial Suicide EP has been coming for about 6 months now. We also did a couple of a tunes with Gera & Stone lately which are close to done.

Quadrant: We have a lot of irons on the fire. we’ve got a collaboration with Ill Truth, we’ve got some things bubbling with Sofa Sound. We’re happy with our dub backlog again now.

That’s where you need to be! Any final thoughts?

Iris: We’re in the UK in December for some shows in Bristol and London and then a couple of days in Amsterdam. Come and say hi.