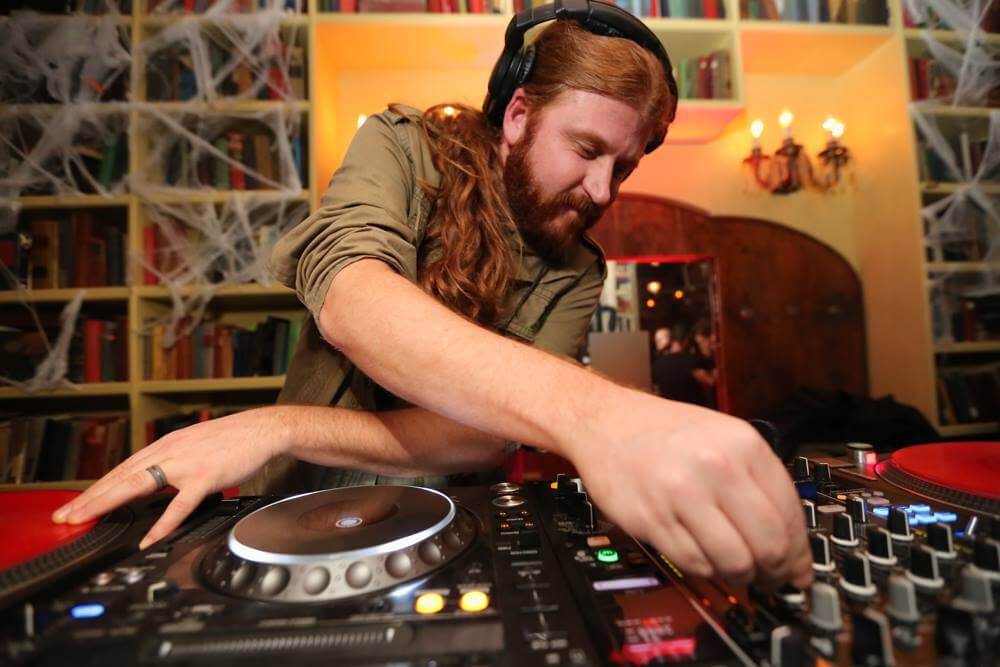 Some albums are long-awaited. Anticipation built up over the course of a few key singles, performances and parties; Chase & Status’s RTRN II Jungle, A.M.C’s Energy and S.P.Y’s Dubplate Style are a few strong examples this year.

Other albums are suddenly announced out of the blue with no prior clues or hints and instantly cause hype and highkey interest in the weeks before release. LSB & DRS’s The Blue Hour and Kimyan Law’s Yonda are just examples from this month alone.

Then there are the albums that just suddenly land out of the blue. Guerrilla-dropped with no warning, no singles, no broken-into-EPs series. Nothing. It’s just suddenly there, the world is a better place for them being here and it feels as if it’s been in your collection for longer than it has. Calibre’s 4AM last year on 31 is a good example. Random Movement’s Lost On Purpose is another.

Released out-of-the-blue last week on his Flight Pattern label, Lost On Purpose even took the Florida-based US OG by surprise due to quicker vinyl press turnarounds than he expected. But he knew better than most it was en route… It’s the product of the last two years of his work and by far the most ambitious and complex body of work he’s ever made.

Created amid his other musical commitments – playing in bands on the local live circuit and mixing and engineering bands – it’s a 15 track trip that doesn’t just run rampant across his funk-focused, soul-laced palette but also works cohesively as a body of work. In amongst the strident piano hooks, frenetic break arrangements and those lavish tubular rolling basslines he’s been honing since he emerged in 2005 on Marky’s Innerground are atmospheric elements, textures and motifs that link the tracks together. From intro to outro there’s a seamlessness and a carefully considered vibe running throughout. That’s not all that’s been considered; the title, concept and mindset he arrived at to create the album ensure there’s a great message to the album that should resonate with all of us. It’s resonated with Random Movement so much he’s already considering his next album!

Time to get lost with the man himself…

This feels more like a debut than your last one almost 10 years ago!

I think so too man. Lucky Guess was a fun album but I didn’t know what I was doing back then. I threw a bunch of songs to Marky and we put it together. It was a bunch of singles thrown together and a great moment in time when I was figuring out who I was as an artist. That never ended actually. But yeah, this feels more like a proper debut. I did everything on my own. That’s an artist’s dream – to have no major roadblocks of what you’re trying to pull off.

I love the title man

Lost On Purpose is supposed to be a dual meaning. One of the things I end up doing artistically when I get into a rut, or some shit happens, I go into the woods on a camping trip and I’ll be out there until I want to come back. It’s the most freeing thing – to go out into nature and just get lost. I also have a nihilistic view on life. I believe there are people who are completely lost in their idea of pursuing what they’re meant to be. They’ll do anything it takes to get there. And I think a lot of that is bullshit. Life is a huge part about enjoying it and making people around you enjoy it. So many people are out there doing fucked-up shit because they think they have this purpose.

Absconding to the woods gives you much more purpose. Do you go rogue? Like foraging for food and fighting bears?

Haha, no I don’t forage. I just bring a lot of booze with me! I’m not going survival style, I’ve got enough food and supplies to last a few days out there in the wild. The point is to forget all of this noise that’s ruining all of us. Taking three days in the week to be in the middle of nowhere is the best way to do it.

Did you decide you’d make the album during one of these trips?

I guess somewhere along the way. Basically I’d got out of my day job and A Sides warned me about this. He said ‘now comes the pressure.’ I didn’t know what he meant, but I quickly realised. When you do art full time as a career there’s this pressure to constantly be making and doing and showing you’re still valid. It’s all ‘me me me’ tripping in people’s ears.

The pressure of finances too. It changes your relationship with your work…

It does. Totally. It’ commodifies what you do. That sucked the life out of me. There was a period of time when I did 30 remixes in 18 months because I couldn’t come up with anything of my own that I was happy with. But luckily it turned around and at one point I realised all of this was meaningless and I should be having a good time and not be worry about trying to stay in people’s ears because it sucked the life out of me. I’m doing live music locally now and working with a lot of bands in the studio and that’s offset the stress I was having. It means I can do art for arts sake again.

And the album is a result of this?

Absolutely man, things became a lot clearer. Not easier, though, it was a huge challenge but I had the right mindset again.

You can hear the detail in it. The little links and motifs that run through it…

That’s exactly what I was trying to do. It’s really awesome. It made the whole thing a lot more challenging, but that’s what I wanted to do. Write an album that really is an album.

Meta-Data-Tation is a persy for me…

That was a fun one man. It was the last tune I made on my old Juno 106 which died on me.

You a hardware man?

Oh hell yeah. I use a lot of hardware but when you collect them people don’t warn you that these things break all the time. My studio got hit by lightning and I lost a whole rack of equipment. That was fun!

Mad! Did you lose any of the album?

No but I was working on it at the time. I actually had my headphones on.

It was like someone zapped my ears! But no, nothing got lost but there all kinds of issues and set-backs. Mainly in the mixdown department. In my non drum & bass capacity I got the opportunity to work with Steve Albini – the man who produced guys like Nirvana! – for 10 days. And since then I’ve been going crazy on mixdowns. The knowledge I picked up from him was just incredible and a very big thing for me. Seeing the workflow, peaking over homeboy’s shoulder, just watching and learning and understanding things was paramount.

Where can we hear that the most on the album?

Breaking The Mold. The harder tune on the album. That was the most challenging mix-wise and recording wise. There’s a little hi-hat sound which is me tapping on a rum bottle. I tried to record as many acoustic instruments and did a lot of bass playing.

When did you start playing them out and seeing if they stacked up?

The album was done a year ago and I’ve been road-testing since then. Usually at the end of the night when everyone’s drunk and no one will notice they sound bad. It sucks when you work hard on a track and then you play it out and you realise it doesn’t sound good at all. Taking it out of Ableton Live and mixing down in Logic was key. It’s funny, I do a lot of mixdown work with live bands and have developed a way with them that I’ve utilised into my own mixdown work. I’m way better at making other people’s music than my own, basically. I’m way better with other people’s music full-stop.

Yeah we gotta talk about Dilemma’s release. That was just after her stuff got nicked wasn’t it?

It’s an interesting ride because I’m not a natural businessman. I know how to be an artist but the label has made me learn how to run a business. Bottom line, I just put out the music I like to put out. I see these guys and girls who have awesome tunes and have not gotten their limelight or spotlight and want to help them. Flight Pattern is a stepping stone so they can get on larger labels. I don’t want people to hang out on the label, I want them to progress. That’s the whole point of this. I’m just trying to get some ears on their shit.

Amen! So what’s up next?

Yeah man, albums are fun! It’s nice to have a message and to be able to tell a story. It’s a lot of fun to do it this way. I’ll keep you posted…

Random Movement – Lost On Purpose is out now on Flight Pattern: Vinyl / Spotify