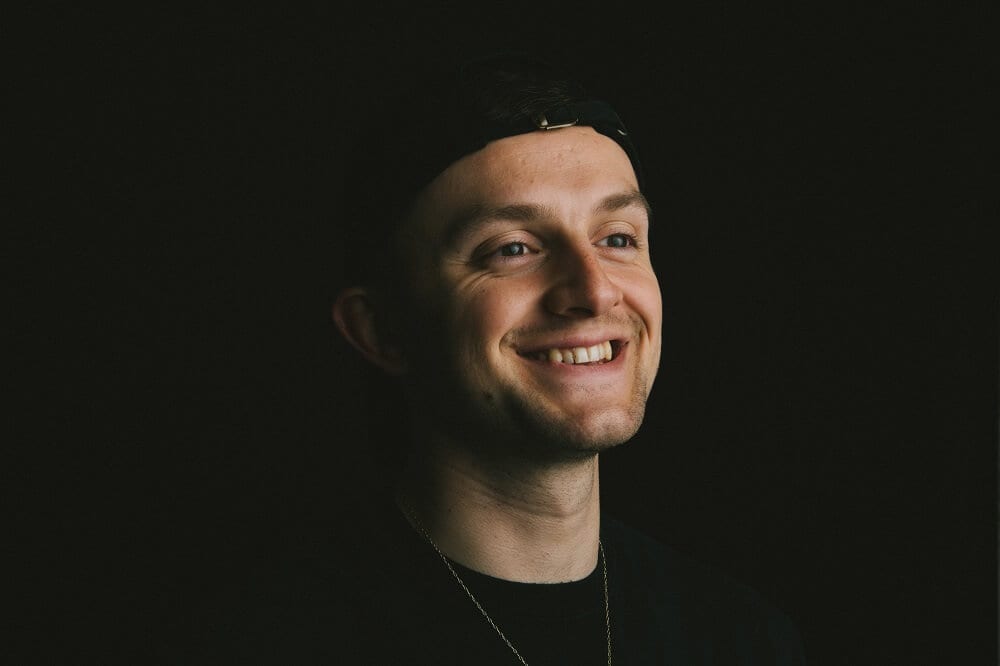 We ran Unglued’s first ever interview in January 2018. Back then he’d just dropped Bootstrap Bill on Sick Music 2018, no one knew who he was and there were rumours it was an alias for a much more established producer.

Then came the bombardment… The wily, springy roughened funk of his first single Chicken In A Spacesuit / Ghetto landed three months later. As did a white hot bootleg of High Contrast’s If We Ever, a track which was up there with Police In Helicopter in terms of hype and hush-toned dub hunter lust. It was so sought after, in fact, the bootleg became an official remix with the blessing of Mr Contrast himself that summer (and went on to win the Best Remix award in the Drum&BassArena Awards)

Along the way there have been many more high profile dispatches; his Deep, Dark & Dirty EP and a cheeky twist on Poison by Bou, who he’s since collaborated with on Sick Music 2019 with Ascendant Man. Now comes his first official single of 2019 and it’s arguably his most accomplished release so far both sonically and creatively. Across two tunes he shows more breadth than he’s ever done before, it also features two legends from two very different sides of the scene and both tracks go bananas in the dance…

If you’ve caught him play in recent months you will have definitely heard, nay felt, these tunes… Plus loads more. He’s packing an insane amount of unreleased material. But, like the pioneers who started this movement, not all of it will come out. An old head on young shoulders (now no longer covered in Post-It notes), Unglued is on a serious mission right now, this is where he’s at…

What have I interrupted this afternoon?

Studio vibes all day. I’ve been in the zone since this morning and completely forgot the time – I need to eat!

I’m buzzing on these tunes for sure. I’ve got this made rave thing going this morning. You know Wots My Code, Total Science remix?

Do I ever. That riff is the essence of rave!

That’s the vibe I’m going for. Kinda crusty sounding. It’s so sick. So yeah I’ve been working on that today.

Nice. So we did your first ever interview just over 18 months ago. Back then your name and identity were under wraps and you’d only just released Bootstrap Bill. How things have changed for you!

You must be relieved you can take those Post-It notes off your face now?

Finally man. My face was getting sore.

The music had to speak for itself though right?

That’s what I want it to do. And still do now as much as I can. But I honestly couldn’t’ have predicted the support I’ve had. It’s been beyond any wildest dreams. I was just happy that Hospital thought my tunes were good enough to release to begin with.

Had you done the High Contrast bootleg by then?

I’d done it but no one knew about it. It had been sitting on my computer and I played it a few times. Then I went away for a while, came back and everyone was dropping it. I’m still hearing people drop it now 18 months later. Madness.

Must have been nice to get the blessing from Lincoln?

Massively man. It was an honour. I think Calibre is the only guy to have done an official remix of High Contrast. That’s pretty mental!

You’re in an elite crew!

No no no, Calibre is like a god. I just got lucky.

Ha. Give me more turning points for you over the last year or so…

Playing Arcadia on the spider. I remember being at Glastonbury in 2017, before things had kicked off, and I said to my mates ‘one day’ then the next year I played on it in London.

Ah yeah I bet. Sick set at Glastonbury this year too!

Thank you man. It was incredible. It’s funny, Glastonbury is so well known it doesn’t matter who you tell that you’re playing, they’re like ‘woah no way!’. I saw all my old mates from uni at my set and it was way more busy than I was expecting! The stage we were on was huge. Still can’t really believe it happened now to be honest.

How about some other highlights?

Winning Best Remix at the Drum&BassArena Awards. I’d never imagined winning an award in the first year. That was just mindblowing.

You were nominated for a few if I recall?

I came second in best newcomer too. Madness.

That’s amazing. So Born In 94 is your first release of the year really… Playing it nice and cool eh?

I’ve been thinking about this a lot. Basically I’d always rather do quality over quantity. Two or three release a year and make sure they’re as best I can possibly do. That’s what I want. Not just bang it out. Being on Hospital helps me with that; I’ve got 30 tunes I’ve done which I play at gigs but Hospital have so many artists and such a packed schedule you can only release your best stuff – otherwise they’re like nah.

Your sets are pretty dub heavy then!

Most of what I play is on dub. Not all from me. I play everything I like and enjoy and go across the board. Not just by me but by friends like Signal, Buunshin, Fade Black – they’ve been making crazy tunes I’ve been enjoying playing. With my sets I tend to open with heavier, crazier stuff for the ravers then I work my way back chronologically. I go through a lot of jungle and pretty much always finish with Born In 94 at the moment It depends how much the crowd are enjoying it to be honest. Some crowds in some places just don’t get jungle at all.

Last time we spoke you told me about your uncle exposing you to jungle and vinyl. How’s your record collection coming along?

Quite nicely thanks. I still go to RK Bass in Brighton all the time to see my mate Leanne. They get upfront Unglued bits from me so I just dropped off a few signed copies of the record.

Yeah man, it’s cool to drop down and give them a cheeky exclusive. I actually saw my record getting pressed at Vinyl Presents in Hitchin. They showed me my record, we tweaked with the colour. It was very cool.

That must be a vibe!

It was my first ever solo vinyl release too so I was very happy. Definitely a vibe.

So this release sums up where you’re at then with both sides of your style. Born In 94 is your jungle roots. Malware is the crazy rave side.

Yeah just like my sets. I love that super lairy futuristic sounding stuff. I actually made Malware specifically as a set opener.

How did you hook up with Flo Phace?

I played at his album launch party in Hamburg. I sent him a load of tunes, he liked Malware so we worked on that in his studio. It’s a crazy studio man, like a spaceship. It turned out really nice.

I can imagine his spaceship studio! Sick. So back to 94… This is blates the year you were born, right?

Totally. I wanted to make a jungle tune for a long time but I found it’s easy to make something that sounds old but it ends up sounding cheesy, it’s a lot harder to get that proper jungle feel. I had a few whacks at it and this was the result. I do find it funny that things have come full circle and that I’m making sounds that were first blowing up the year I was born.

Yeah man, it’s very difficult to find clean MC samples on tapepacks because there’s usually music playing constantly. But this is from a set he was doing with Bukem where one deck had broken so Bukem was putting a record on. Letting it play, stopping it, then playing another one. There’s 30 seconds of clean crowd noise with Conrad between each tune.

What a gold mine!

My uncle brought it to my attention. As I mentioned in the last interview, he had a massive influence on me and got me into jungle and taught me how to mix. He played it to me and I was like ‘wow! This is the one!’

Yes people are realising they’re the most important people focussing that energy in the rave and they bring people together. MCs are a vital part of the scene.

This must have had full blessing from Conrad, too?

Yeah he’s been sent the tune and is happy with it. I’m meeting him soon which I’m buzzing about.

He set a blueprint for a lot of MCs. Especially with his melodic, singing style…

He did man. And I think it’s really important for artists of my generation to keep their legacy going and making sure the new fans coming into the genre know about guys like Bukem and Conrad and just jungle in general. It’s happening now with Chase & Status and S.P.Y – there’s definitely a renewed interest in jungle and the music still sounds fresh even 25 years later.

Let’s go back 25 years for the finale. Here are three things that were also born when you were. Thing number one: the internet…

Wow man, I did not know that. I’ve grown up with it. It’s cool because I can still remember when it wasn’t totally ruling our lives. But I don’t think I’d have achieved what I have so far without the internet. That’s the same for any artist breaking through in the last 10 years and guys breaking through now. It has its down points but if you don’t get consumed by social media and being super vain then we’re good.

I remember them for sure. But I had an old school N64. You had to blow the cartridges and everything.

Yes mate. That elusive golden gun was the one – if you got it, you won the game.

Oh mate I watched that 100 times as a kid! There’s a new one coming isn’t there?

Yeah and I’m amped for it! Final 1994 thing: The George Foreman grill…

I had one of these in uni! Me and my mate George (different George, not Foreman obviously) had one and it was disgusting. The tray of fat was horrific – we wouldn’t clean it up, we’d just turn on the heat and let it melt off.

Nah that was another mate Matt. And a different mate Adam named Chicken In A Spacesuit. George has yet to name a tune but he can any time.

What’s coming up next?

A couple of tunes with Degs, a few collabs I can’t quite divulge. All little bits here and there. I’m just working on as much stuff as I can and will eventually think about an album. But that’s a long way off – I want it to be amazingly sick so for now I’m just cherry picking the best and stashing them for it.

Quality over quantity, as you say…

Every time. There are only so many Unglued tunes people can listen to at any one time, right?

Wrong: Born In 94 / Malware is out now on Hospital