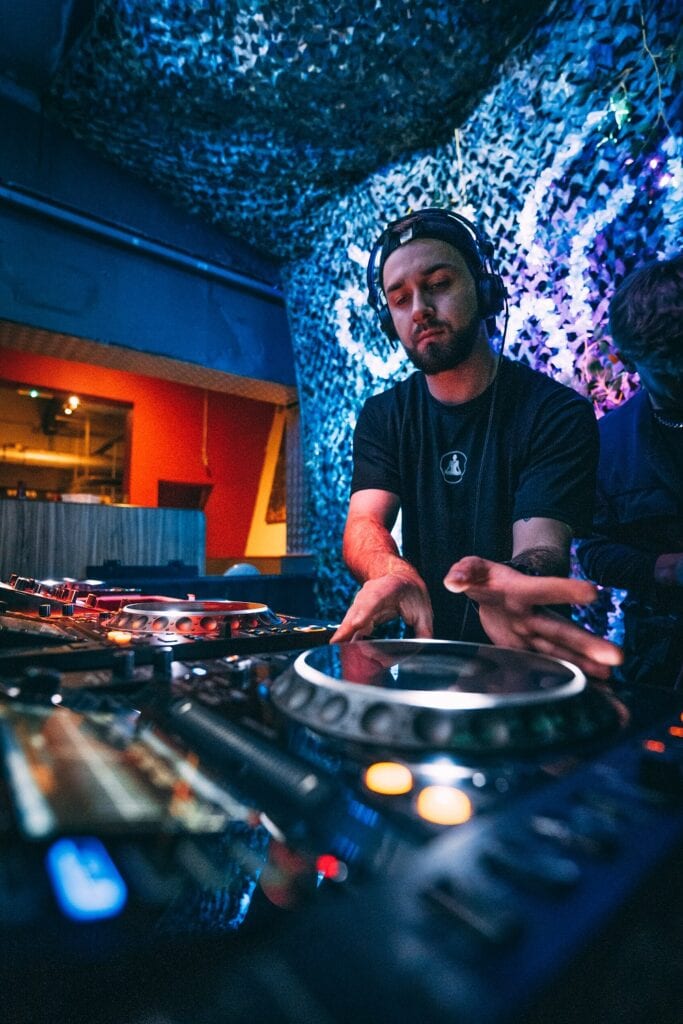 His roots are in 140. He names his tunes after curries and shampoo. In a very short space of time he’s released on some incredibly legit and on-point labels such as Incurzion Audio, Monk Audio, Bowlcut Beats and, of course, the one and only Critical Music.

It’s ABLE and he excels in crafting remarkably springy, leftfield minimal bass music that’s not shy of the odd flip or occasional off-piste tempo explorations. The latest example of this is his latest EP Pillar To Post which dropped last week. Following his EP in Critical’s Binary series this time last year, it’s his full debut on the main label and not only does it pack four of his best tracks to date, it also comes with his most personal tune to date.

Ready and willing, we called ABLE for a chat to find out more….

So this all started on the free download platform Oscity, didn’t it?

Yeah I cut my teeth with them, with free downloads. They’re very good friends of mine now and I’m still involved. My first tune I released with them was a bass house track actually. It’s very different to what I do now, but it’s where I started and the ball got rolling from there. It was a cool way to get into it.

Yeah totally and it’s also good for people who don’t know many people in the industry. I’ve learnt as I’ve gone along that it’s not so much what you know, it’s who you know. You could be the best up and comer in the world, but if you don’t know anyone to get your tunes to, then how are people going to play them? So platforms like Oscity help to highlight artists.

It definitely takes longer but I’m still a firm a believer in good music eventually rising. Did you have any friends in the industry?

Only my friend who was involved in Oscity, but he didn’t know anyone heavily involved in the scene either at the time. But you’re right because Monk Audio picked me up through Oscity and another label Royal Audio also picked up my tunes through there. That was very early on in my productions when I was making a darker sound which I guess was comparable to Arkiak’s sound. Since then I’ve moved towards the more minimal jump-up style but in my own way.

I think you make beats that can weave between the two. The darkness is prevalent in both…

Thanks. I think the darkness goes back to when I first started hearing this music, around 2009ish and the 140 sound. I technically started making music when I was 14 or 15 in school on Garage Band on those old big-assed iMac.

UKF must have played a role in all of this!!

Oh yeah, that was my go-to. I was a BMXer and skater kid back in the day and that was all I’d listen to. That blue speaker always pulsating away on the screen, which is why I’m so chuffed to speak to you now!

Nice! You did a 140 remix of Dopplershift recently, right?

That’s right. Keiran’s a good dude. That was through Monk Audio. They asked if I wanted to do a remix and I got talking to him. Turns out he was into what I did but he was expecting me to do a D&B flip on his track. I went on a dubstep vibe instead and he went crazy when I sent it to him.

Sick. So for someone who doesn’t know anyone in the industry you’ve worked with some super credible and on-point labels. Before we get to Critical, let’s highlight releases on things like Bowlcut’s recent label and Incurzion Audio

Oh what Incurzion are doing now is just next level. They got the whole of Wales backing them and they should be proud of what they’re doing. They gave me some great opportunities. One tune I did with them, Sceptic, was a D&B/halftime hybrid. It starts drum & bass then flips into halftime midway. I seem to do weird things like that with my music.

It’s good to do! Don’t stick to formula!

I think so too. D&B can sometimes be a bit too regimented in that way, so I do like to keep things varied or try new things. But back to those releases you mentioned, Bowlcut hit me up after my Binary EP. I knew about their clothes already so when they started their musical imprint I was very proud to be part of that.

Obviously Critical has been the biggest success manoeuvre. The Binary EP was a year ago wasn’t it?

Yeah my Facebook memories keep reminding me. Can’t believe a whole year has passed! But yeah, Kasra is such a patient man. It must have been a good three months when I was sending him tune after tune after tune.

Hitting him up in an old school way?

I guess so. I mean there must be hundreds of talented artists who do this all the time, but I’ve got a feeling Kasra knew about me through InsideInfo who was supportive of my music. I’d also supported Halogenix and Kasra at a club called 33Hz and Halogenix asked me for one of my tunes. So I think because of these things Kasra has noticed me pop up in his inbox. So I think there’s some word of mouth action in there. If these releases have happened purely by me sending demos to Kasra blindly then that blows my mind a bit!

So this new EP Pillar To Post. This is your most accomplished EP so far I’d say!

Without a shadow of a doubt! After the Binary EP happened I was hellbent on getting the full release. I’ve loved Critical, their look and their sound, for years. I look up to Halogenix a lot, he’s a major inspiration for me, so to work on the same label as him is a big goal for me. So I set my sights on getting this full Critical release and pushed myself. Two months after my Binary I was plastering Kasra’s inbox and that’s where I learnt his patience. I knew he was basically saying ‘get better and improve on what you’re doing’ but he was saying it in a very nice way. Eventually the penny dropped and I thought ‘okay, I get it, I need to really focus on this’ So I went quiet for a bit and got to work and I could hear my sound changing and developing.

That’s cool because that’s hard to do when your head is buried in your work!

Very true. I’ve learnt that it’s so important to take a break from your music. If you’re head is in it all the time you’ll never hear any progression. So now if I make a tune I’ll think ‘okay this might be good’ and I’ll sit on it. I won’t send it to anyone, I won’t send it to Kasra, I won’t listen to it. Then I’ll come back to it after a few weeks and will be able to hear it fresh. Otherwise you end up going over and over tunes which are either never finished or just not that great.

Well Saag is great. I love a bit of spinach in my curry!

Ha! I was eating a saag masala at the time. It was pretty tasty actually.

I do have a habit of naming my tunes stupid names while they’re WIPs, but then never change the name to anything afterwards. I’d sent Saag to Kasra with ‘name pending’ in brackets after but by the time it was ready for release I knew it as Saag, Kasra did and the DJs who I’d sent it to knew it as Saag too. But in the past I’ve done silly names like Lacura, which was on my Binary EP. That one is named after my shampoo! It’s just a bit of fun really, it’s a bit of a middle finger to convention. You don’t need to give your tune a dark and mysterious name, it’s just a track title.

Yeah I agree! So how about Pillar To Post, what’s the story there?

That actually has a much more personal backstory. The lyrics I found represented what I feel at the time. I had a lot of family issues going on and have done for a very long time. The lyrics were in-tune with what I was feeling and I ended up forming the tune around those lyrics. Usually it’s the other way and I’ll find vocals for a tune but this was different. The tune is an argument if you listen in detail. I didn’t realise this at the time but after I’d let it settle I realised this and was really happy with it.

So what’s next. You mentioned a club called 33Hz, are you resident there?

No but I played there a lot pre-lockdown. It’s the only club in Guildford that plays drum & bass, it’s like Bristol in one club. You get a lot of heads down there, everyone knows each other, it’s got a real vibe.

Simula is from Guildford too, I think…

Yeah I was with him the other month! I’m pretty certain Sub Focus came from Guildford too. But yeah 33Hz is a sick club. I’m looking forward to playing there again when all of this is over, I’m booked to play with No Patterns with them in August and a few other bookings. I’m looking forward to playing further afield too and getting my sound out there and get more of a variety of people to hear what I’m about.

Sick. How about releases?

I’ve just finished an EP with Sine, that’s more venturing into the DLR type of style. There’s a tune on there which is very old school, which I’m excited about. I’ve just switched DAW to Bitwig so I’m hoping that change will bring in a new sound or change my workflow a bit. I’m also working on a tune with Cesco, we’ve become pandemic buddies over the last year and when he came to visit we did a tune in a day, which is unheard of for me in collaborations. So we’ve got a two track single in the works for Monk Audio. So loads more to come…

ABLE – Pillar To Post is out now on Critical Music