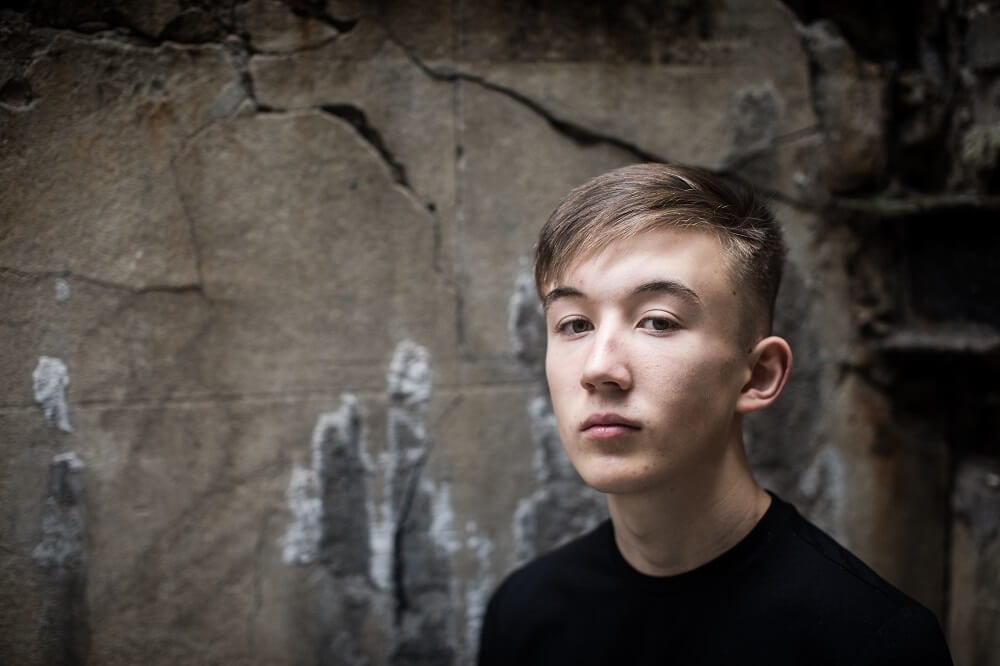 A permanent fixture on Zinc’s Bingo Bass rollcall, and a regular staple in any discerning bassline selector’s set, Dommix has steadily rising up the ranks since he first emerged in 2017. But this year has seen a significant level up in his manoeuvres…

2019 kicked off with the young UK producer appearing on both the Bingo Bass Bombs EP and Goof’s Globes album before a series of EPs and remixes landed on a near-monthly basis via the likes of Circus, Crucast and, of course Bingo.

Tracks like Monster and Bass Bump were heavily spun all summer, his remix of Brown & Gammon’s 2013 classic The Combination whips up goosebumps from 20 paces and he’s just wrapped up the year with two consecutive thumpers on Bingo: Show You and Stackz. Before his biggest year to date comes to a close, we called him up to find out more…

You’ve had a busy 2019. You’ve had something out pretty much every month…

Pretty much yeah. I’ve had the most tunes out and they’re the tunes I’m proudest of as well. I’ve been really happy with my releases this year.

You’re your own worst critic aren’t you?

Yeah! Or you’re happy with a tune when it’s done, but then there’s loads you learn after making it and you want to go back in on it but the label haven’t even put it out yet. You hear it and think ‘I wish I did that’ or ‘I wish I did this’ but I think I’ve got to the pint where I’m happy with what I’m sending to labels.

I bet Zinc understands though!

He does. He’s a producer so he totally understands. He’s also very good with his feedback so by the time it comes out on Bingo he’s given me the right direction to be happy with it anyway. Some labels expect a bassline banger and are like ‘yeah let’s put it out, whatever.’ But he’s listening on a deeper level and giving me specific tips to work on things.

You can’t ask for a better mentor as a young artist can you?

It’s the most helpful thing for me. He’s got so much experience. Having him as a mentor has brought my production to the next level. In the year and a half I’ve known him I’ve learnt the most I’ve ever learnt since I started producing.

Can you hear him in your head when you’re producing?

I can sometimes, yeah! My first Bingo release was Bass Bump and that was the first time I had feedback off him. He told me about ear candy; those the little elements you don’t hear first time but they fill the details in. When I think of the first version of Bass Bump I sent him compared to the version he released, the difference was incredible. So I do hear him all the time in my head and think ‘what would Zinc think?’ Every tune I make I think of these details. It’s helped me keep a standard.

That’s awesome. It’s the subliminal details you don’t notice for ages isn’t it?

Yeah Gammy Elbow is a good example. When he first told me about the details and ear candy stuff I went back and listened to that track and paid attention to it on a different level. I must have heard that tune 50 times before but when I listened for these things I heard loads of new things I’d never heard before. Basically things you only notice when they’re taken away.

His old breaks treack Go DJ had those little tricks on the vocals, panning and stuff…

Oh yeah man, any of his tunes going back through the ages. Bambambam is another good one. Things going left and right and stuff. Those are the elements to play with. You can’t play with the main elements too much or you’ll affect the mix. But those little details can go as crazy as you like.

This is what separates proper tunes that stand the test of time and standard Saturday night bangers!

Definitely. A banger is s just a sick bassline but tunes with details are more like songs. There’s more to them.

There’s a lot of those details on Pull The Trigga last year. That was a big one…

That’s been my biggest tune. Zinc helped with final stages of that with the master which was great. When that first came out the support was crazy. I’d never had support like that. Pretty much from my favourite DJs. I was seeing these mad videos from guys like Q, Royal T, Flava D, obviously Zinc, Skepsis.

Nice. You ever been in a club and heard your tune dropped?

It’s funny; my mates would be out and they’d hear my tunes drop and I’d never be there. They’d send me videos on Snapchat. But it first happened this summer at SW4. Darkzy played one of my tunes off my Crucast EP and it was mental. I wasn’t expecting it at all. We’d only just turned up. I could hear the build up coming through and I knew it was mine. It dropped and I went to my mate ‘oh my god, it’s my tune!’

Did you play it cool?

No! I was going for it! Now I want to start playing these tunes out myself a bit more. I’ve been focusing on the releases and I’ve got a few behind me so hopefully the gigs will come in.

All in good time. You’re building up a body of work right now and showing more variety in your style. Does that come with the confidence in your tunes that you mentioned earlier?

Yeah I think that’s important. DJs never play just the same vibe all the time when they play so you need those different styles anyway. You might want to go for a groovy warm up vibe, or a peak-time vibe or more of a tear-up thing.

That’s kinda the beauty of bassline/bass house isn’t it?

Yeah I don’t see it as one genre any more. You’ve got the Night Bass vibes, then guys like Bushbaby who’s going on a housey vibe then you’ve got your bangers with Crucast. Bingo sits between all of that.

So does last month’s release Show You, I would say!

I was going back to that Pack Rack sound. It’s quite upbeat, I made it a year ago when I was making a lot of tunes around the style sound. The melody for that tune actually came to me from nowhere. I had to sing it into my phone and record it.

You can’t choose when inspiration hits you can you?

You can be anywhere. A lot of the time I’m at work so I have to run into the toilet and sing it into my phone and look like a bit of a nutter. But if I ever get a melody then I have to record it. If it comes to you naturally then it’s more likely to feel and sound natural for listeners.

It’s what people go home with in their heads

That’s it. So Show You came with that idea and I think you can tell.

Do you have a musical background anyway?

Yeah I played the guitar for a bit so it definitely helps with an understanding of chords and melodies and things. It’s one thing making a horrible bassline sound, but if you can go deeper with it and get a bit of melody then it’s the best of both worlds. Especially with chords on the breakdowns and things. It just gives it a bit of musicality. But I also think being exposed to this music for as long as I can remember helps.

Your old man is an OG raver, right?

Yeah he was. When I was younger I was around house music and rave music all the time. I remember I had a crappy little controller deck and I’d mix those old rave songs because they were the songs I knew. I couldn’t have been older than 11 or 12.

Nice. Has he ever been to any of your gigs?

He’s been to one yeah he likes it. I think he prefers the mellower, groove house stuff but he can hear where I’m coming from and is happy that I love what I do.

I’m happy with that remix on Circus earlier this year. You talk about melodies and Brown & Gammon were kings of them in dubstep. And as a Outrun as well…

Yeah that remix was a favourite actually. It was really spontaneous and a very quick turnaround. My manager sent me the stems, I sent it over to them and it was out in a month. That was great. But yeah, I’ve always loved their melodic side of dubstep and the vocal was really nice to play around with.

If you could remix any tune what would it be?

That’s a good one. Dream tune would be Katy On A Mission. That’s one of my favourites, I’d love to have a go on that.

Who would you like to remix one of your tunes?

It’s got to be Chris Lorenzo!

Hell yes. So you got a new tune landing this week. Stackz. There’s some really interesting sounds and lots of those details we talked about before. Tell us about this one before we sign out!

Yeah there are definitely a lot of those little bits going on! The way I went about the main elements on this one was slightly different than usual, though. Instead of having the sub bass follow the main lead sound, it’s actually an 808 bass sample that has been side chained to the kick and allowed to just decay out on each bar, with a slight variation at times. It just gives a different feel. The vocal is a more prominent element in the drop rather just featuring in the breakdown like some of my previous tracks. And there’s plenty more coming soon…

Dommix – Stackz is out now on Bingo Bass