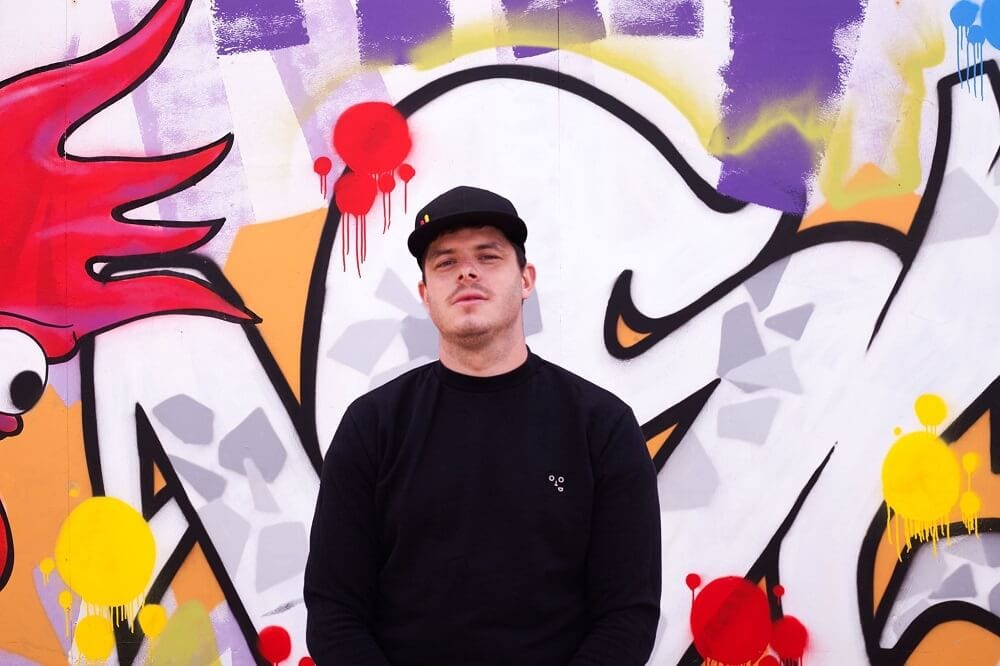 AudioPorn welcome a new member to fold this month. His name is Leaf. He makes remarkably wonky, woozy and often savage beats. If you’ve been following labels like Sub-Liminal, Serial Killaz, Murky and Grid in the last few years you will already know who the hell he is.

The lead track from his AudioPorn debut, fittingly entitled Warp, is perhaps his most leftfield wounder to date. Coming on surreally strong like Salvador Dali making a foghorn banger, it goes like this…

… And it’s backed up with three more explorative peaktime gut-punchers. One of them dates back to the very first tune he ever finished about four years ago, and two of them tap into the strict diet of reggae, dub and psychedelic rock he was brought up from his dad. But with a name like Leaf, you’d expect nothing less than deep roots, right?

We branched out to him to find out more.

Wicked seeing Benny L recommending people vote you as a Best Newcomer in the Drum&BassArena Awards!

Yeah that was cool man. He’s been playing my music and supporting me a lot. I was really happy with that.

That’s classic AudioPorn. When one of the team drops something, they all support, share and push it…

It is mate. Shimon’s been amazing. He’s set me up with a remix for one of the biggest labels and just keeps throwing stuff at me every week. It’s what you need; someone driving you, giving you inspiration. Everyone’s helping each other out really. It’s cool.

Definitely. He got me my first Fabric set. We’ve just done the Kiss FM show and now Rinse. I’m playing on the Benny L tour, too. I’m looking forward to those shows.

I saw you played Boomtown this summer. Looked mental…

Yeah that was really good. Equinox Festival was mad, too. This summer was a first for festivals like that. Really inspiring, I’m looking forward to next summer already.

Nice. So I want to know what happened the very first time you played Warp. It’s a mental tune, I suspect it fried unsuspecting minds…

To be honest with you, I made it and didn’t think anything of it. I thought ‘nah no one’s gonna like this.’ I didn’t play it myself but I sent it to a few people and Shim messaged me saying it was sick. I thought ‘oh, okay maybe it is alright.’ Then I saw him playing it – at Boomtown actually – and people were stopping in their tracks like ‘what the fuck?’ That was surreal.

The whole vibe is surreal. The best way I can describe Warp is Salvador Dali doing a foghorn tune.

(laughs) I like that man. It is a warped tune. I was just sat on Serum trying to make mad basses and found that and it was one of those ‘that is cool’ moments.

I love those woozy wonky noises. It’s a shame people are just passing them all off as foghorns. There’s some pretty mad sound design there.

I agree. There’s mixed feelings about the sound and people hear it as the same style. But I’m just having fun and making what I want to make. You don’t know what you make until you make it.

The track takes a life o its own…

Totally. You have no idea what’s going to happen.

I guess you’ve been doing a lot of that. Your last EP was in January on Sub-Liminal. So the time between has been spent having fun in the studio?

I had a release on Serial Killaz too, but this is the biggest release since then yeah. But totally, I’m just having a bit of fun in the studio, making things I want to make and enjoying it. I don’t take things too seriously. If it’s not fun, don’t do it.

Amen! You got a persy fave from this new EP?

Tough question. I’m happy with them all. Murderer is going off a lot. The weird thing about that tune is it’s the first ever tune I properly finished.

Ever! It was years ago now. I somehow stumbled on it and I’d totally forgotten about it. I thought it might have some good ideas in there but I listened to it and thought ‘hang on, this is okay.’ The mix was ropey so I replaced the bass and beats but the idea and melody and everything was still solid. It’s cool to give the track some life, it was a bit of a milestone. I was also happy with Babylon Flex and Cosmic Ting track too. I love the ragga and dub vibe. I basically grew up on reggae.

That was the soundtrack growing up?

My dad listens to a lot of dub and things like Pink Floyd. All that 70s stuff. It’s had a big influence on me, even without me realising. Even Warp’s got that psychedelic vibe to it.

It has. Does your dad skank to your tunes?

(laughs) Not quite. He says he likes some of it and that’s good enough for me.

So what’s up next?

I’m working on a big remix of a classic which has been really cool. I’m not sure when that’s ready to announce though. And more on AudioPorn. I’m touring with Benny L, we’ve got another Fabric thing next year and hopefully more festivals too. I love playing them, it’s a totally different vibe. You can be totally free as DJ. I was getting into that vibe this summer, I’m looking forward to more…

Warp EP is out November 1