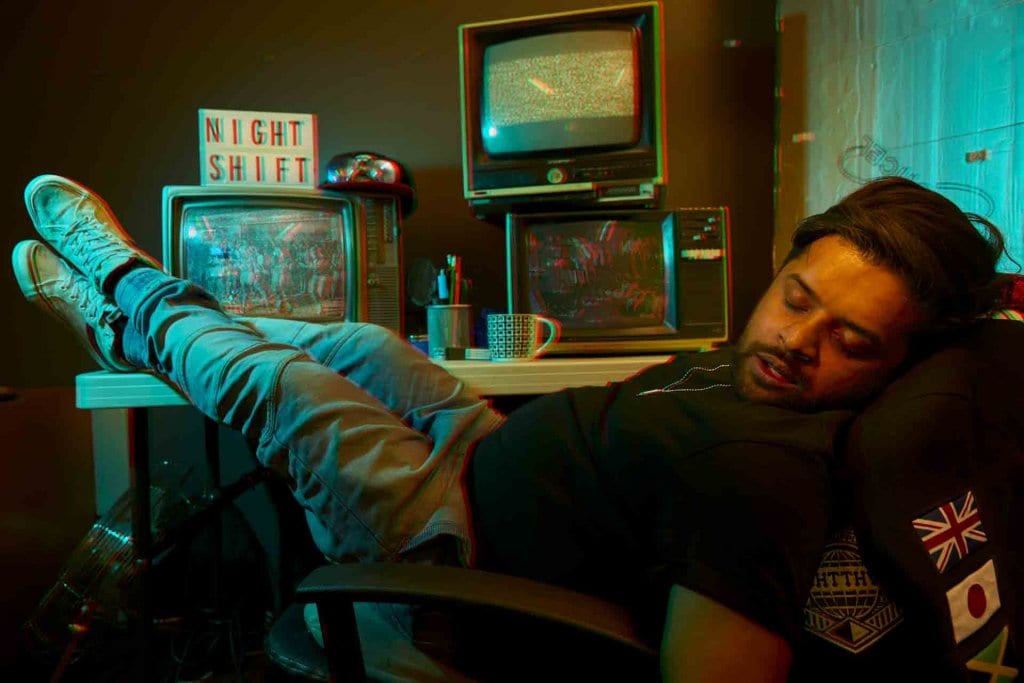 If you’ve been following The Prototypes’ Get Hype imprint you will already be familiar with the mysterious London artist Night Shift. He made his debut on the label in March with the full-firing Late Nights and is already back on the unrelenting platform with another brazen bumper: War

A thunderslap session galvanised by the unmistakable tones of Dread MC, War follows in the footsteps of a recent hellraising remix of Gorgon City and marks the start of Night Shift’s position on the Get Hype roster. Following the likes of Malux and Glitch City, he’s now on permanent contract at the Prototypes HQ.

“We are super excited to have signed one of the most exciting new producers in dancefloor drum & bass,” they tell us. “The tunes he has ready to unleash are gonna switch up the game over the next few years. Welcome to the Get Hype family Mr Night Shift.”

Mr Night Shift! Congratulations on joining the Get Hype family. How does this make you feel?

I feel confident. More so than ever. I am on Get Hype; the label on its way to making its mark on drum and bass and I plan to be a part of that!

How did you celebrate when you found out?

By squeezing my girl and carrying on with my remix of Gorgon City’s Go Deep which was in full flow at the time.

Is it true there’s a secret Get Hype handshake when you all meet up?

It’s not a secret. It’s the way Will Smith and jazzy Jeff greet each other in Fresh Prince Of Bel Air! If you don’t know, get to know…

So here’s what we know about you so far…. You debuted on the label with Late Nights in March, you’ve remixed Gorgon City recent and now you’re dropping War. You’ve clearly got a penchant for the grittier, gullier end of the game and you’re a bit of a bad boy. What have we missed out?

First thing; I haven’t started yet. The second thing; I am just getting warmed up!

What else can you tell us?

I like all types of drum and bass I am a vibes man with a technical itch and in the night is when my mind is most clear and I do my best work! I have been working on this Night Shift project for about four years and I was lucky enough to have an amazing set of friends outside of Get Hype. In fact without them, I wouldn’t be doing this now. Four years ago was the start of it all!

It kinda sounds like you’re too technically adept to be a wet eared freshman. What do you say about that?

I am small, round and brown and I work in the night! Don’t get it twisted …

Sounds like maybe you’ve had your fair share of gruelling shift jobs. What’s been the worst job you’ve had before music came along?

To be honest I don’t have one. Simply because I took my laptop and subpack to my comfy night shift desk job where no one is around at all. As long as you’re awake, alert and on-point, bangers can get started, drums can be processed and bass can be created. Sorry to disappoint. One thing I will say to up and coming drum and bass producers is to find a part time job that works. It makes life easier, 100% trust me I learnt the hard way. Top tip.

Let’s talk about War. How did the hook up with Dread MC come about? Such a distinctive MC.

That’s a great question. The project was recorded in Jaded’s studio in Chiswick. They had a session with him and I am in the same studio block. Dread MC overheard the track as he passed by and quickly jumped in and voiced it. That was way back in April ’16. But, like I said, I’ve been working on my sound for a while and I’m just getting started.

There’s a great crossover between the jump up riff mentality and dancefloor dynamics here. Like the best of two worlds. Was that an intention of yours when writing the tune or is that just a reflection of where you’re at musically and what you love in drum & bass?

It’s a bit of both. But mainly it’s where I am at musically as I have always enjoyed making raw tunes with that Prototypes, Chase & Status, Friction, Wilkson, Dimension or TC vibe but with my own twist and new edge. It’s what I grew up on and I hope I am a fraction of that and people can appreciate  my humble vibes and influences.

Complete the sentence: “War, what is it good for? Absolutely….

….DESTROYING THE DANCEFLOORS ACCROSS THE UNIVERSE”

If you had to personally go to war on one thing, what would it be?

More clubs, festivals and DANCEFLOORS ACROSS THE UNIVERSE

I have track called The Millipede coming on Get Hype 20. Not sure if I am allowed to say that but I want people to listen out for the tune it’s a banger and man like David Attenborough dons that riddim! Stranger things glowing in the jungle NIGHT…. Otherwise I got my fingers crossed for a guest mix somewhere in the near future and I’m looking forward to a trip on some rubber dinghy rapids, bro

Finally, give us three random facts about yourself….

I love to travel, I love sushi, I loving learning about different ways you can f**k up sound in a good way. Not at the same time, though.

Night Shift – War is out August 10 on Get Hype