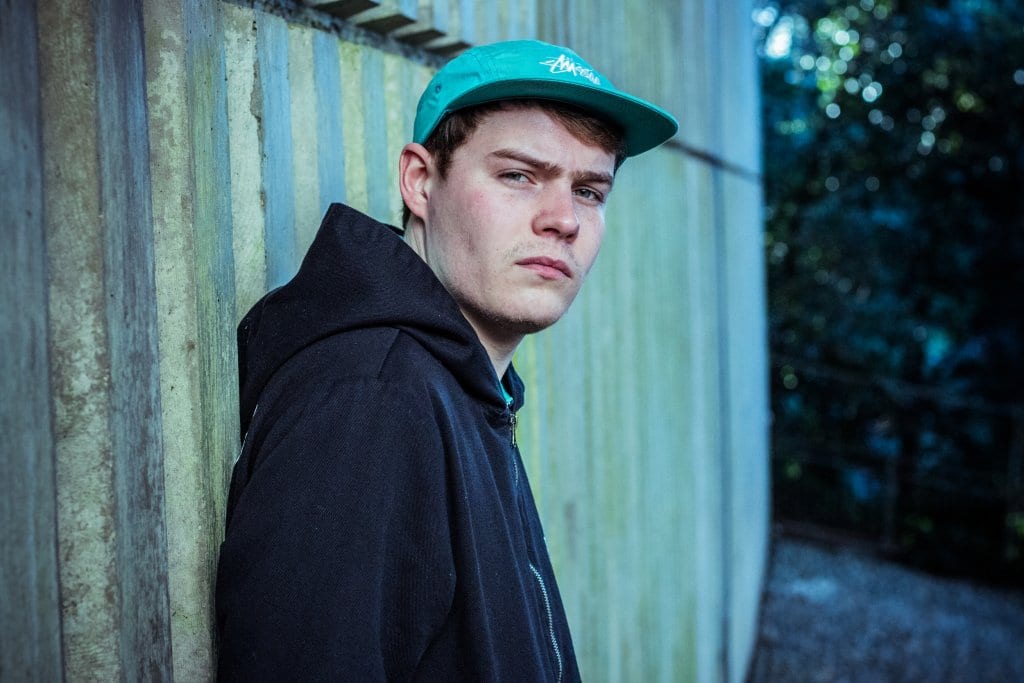 John Rizzle is a man on a mission. A name that you might not know, it seems like he’s determined 2018 be the year that all changes, the year in which he goes from a relative unknown to a regular on Dispatch and beyond.

Three years deep into releasing D&B and counting, the Bournemouth based producer claims to be influenced by the combination of musicality and nastiness native to producers such as Break and Alix Perez. His deft navigation of wobbly sub-bass and boom-bap drum breaks make his music a wild ride through minimality and over-the-top extremity, putting his influences on full display and keeping you on the edge of your seat time and time again.

But despite the maturity endemic to his productions, he’s very much a work in progress and during our conversation he regularly mentions how much he’s learnt and will continue to learn. This is especially exciting considering In 2017 he released his first EP – Ascension – on Dispatch, followed by another Dispatch EP earlier this year and an incredible outing on Vandal shortly after.

Friday saw his third Dispatch release in just over a year, so we caught up with him to find out where he came from, how he makes music, why Dispatch see him as so in-line with their sound and what else he has in store for us.

Would I be right in saying that at some point you used to be a screamo singer?

[laughs]. Yeah yeah, that is very true. I used to be a screamo singer in two bands, one was called In Your Honour and the other was called Skies of Apollo…or Antares, I can’t remember there was so many names for the second one.

Was it one of those clichés where the band can’t decide on a name?

[laughs]. Yeah it was one of those, we were all so young at the time and didn’t have a clue what was going on, it was just a bit jokes to be honest.

How did you transition from screamo singing to making D&B?

I’d been into D&B for a while, sort of all the way throughout me doing the screamo bits. A group of friends I had were well into D&B and mixing, I had a go on their decks and then that was that really, started smashing out some mixes and was like ‘yup this is me’. It seemed like the next natural step was to start making tunes and so within a couple of weeks I was making D&B tunes, or at least trying to.

How would you describe the type of D&B you enjoy making?

Melodic, minimal and deep I suppose.

Has that always been your go-to?

I got into D&B originally through Pendulum, and then branched out from that. I was really heavily into jump-up for a bit, then discovered Break’s tunes — his remix of Going in Circles I think it was — and was just like ‘oh my god’. I then looked at loads of Break’s other tunes, but that sort of set me off on this musical, melodic vibe. I still draw lots of influence from Break and he’s definitely one of my favourite producers.

So, that sort of vibrant drum sound in Break – you see that as a source of inspiration?

Yeah for sure. The ones that stay in my head are those that go from really beautiful, musical vibes to straight up dirty, rolling D&B.

Oh okay, so like Hope, Music is Better or Ain’t No Turnin Back?

Yeah that’s it exactly yeah. I absolutely love that switch from niceness to gnarlyness, and I try to replicate that in some sort of way in my own music as well.

What are the main ways that you think you’ve progressed as a producer in the past couple years?

I’d say mainly thinking about what I want to do, having an idea in my head, then putting it into the computer and then having that idea as something to work towards.

I’d agree with that! I was listening to your back catalogue today, and your 2015 Locked In Sound EP is really, really good but you can definitely see a big difference between that release and, say, Ascension from last year.

Yeah, 100%. I mean, those tunes on were probably made around 2013/2014. The ones on Dispatch, the oldest one on there was around October 2016, so yeah, there’s quite a big gap in between the two and I feel like I’ve been constantly progressing throughout that time. Just been learning new stuff, which has been a lot of fun.

Would you say the Ascension EP last year was a turning point for you?

Yeah, I’d definitely say that is was a turning point, I’d never even thought that those tunes were good enough to come out on Dispatch. I was planning on putting them out on Wreck, and yeah, when Ant came back and said he wanted to sign them it made me realise that I’m good enough for it.

It was a big confidence boost?

Yeah, it helped me realise that I could be doing a lot better stuff basically. Definitely a confidence boost.

And then following on from that release you had another Dispatch EP this year, the Ambra Nights EP on Vandal, then that feature on the Symmetry Selects Vol. 1 release. With your most recent EP that’s 4 releases and we’re only just halfway through the year. Why do you think this year has been so prolific?

Yeah, I mean I guess it’s just being in the studio all the time outside my job, making sure I’m improving and constantly making music. The Ambra Nights stuff, some of that was made last year and some this year, Ambra Nights was the first tune I made because I just felt brimming with inspiration after Sun and Bass.

Tell me about your process for starting a new track, what’s your creative process, talk me through it.

I would base something more musical around the groove of the drums and then fit the bass around that, before extracting some of those elements out for the intro and then add the finishing bits and bobs before linking it together.

If it was more minimal and subby, I’ll just get some drums I really like and go straight in with the subs and mid-bass, try to get a riff out or something that I’m vibing on. Then fit some other stuff around it that I think will work and that’s about it.

How do you deal with writer’s block?

Uhm, when I’m getting really annoyed I tend to just leave it and have a break for a week or so. Just watch the programmes that I like or listen to a load of music I might not have listened to before, so basically just recharge the vibe cells [laughs].

To use the biological terminology…[laughs]. That’s interesting, I think all producers go through these periods and it seems like engaging with different media mediums is an important part.

Yeah, you can find some really inspirational stuff outside of drum and bass. That’ what I love, listening to some ambient or some different things, which isn’t necessarily what I’d listen to but getting some ideas and appreciating different sounds.

Let’s talk about your new EP then…I’ve been rinsing it all day  – Provocation is insane! Describe your EP to me.

Dark, rolling, techy…yeah. It’s definitely an image of where I’ve been and what I’ve been heading for over the past year or so. Just D&B that I like and that I like making really.

Do you see it as your best work?

Yeah, definitely. I see it as my best work that’s come out, but I know the stuff that I’ve been writing the past couple weeks, the last batch of tunes, pisses all over it in my eyes.

Do you have a favourite track from this EP?

Yeah, my favourite is probably Disturbance, maybe Provocation, but I’d probably have to go for Disturbance because there’s a bit more of a vibe in the intro, and I absolutely love the vocal sample as well.

Has it been going down well when you play it live?

I don’t know! I haven’t played a gig since I got the masters back, so everyone else has been playing it out instead of me.

[laughs]. Have you been sent any videos?

Yeah, I’ve been sent a few, and it looks like it goes down and well and sounds nice, so happy days!

From an outside perspective, it seems like this EP is going to cement you as someone who is actually a really fucking good producer. Is that something you feel yourself?

Yeah. I definitely feel now that I know what I’m doing, and I’m definitely working towards a long-term goal of making this my full-time job.

When you think about that goal, what do you see as being the steps to achieve it?

Keeping on what I’m doing really, consistently making good music that people enjoy and that I enjoy making. That seems like to the key to getting there.

What have you got coming up?

So, I’m not exactly sure when things are coming, but at the moment I’m talking to Invisible, Shogun and Metalheadz, as well as more stuff with Dispatch too.

I can see you on Invisible for sure!

Yeah yeah, I’ve wanted to get some music out on there for a while. Funnily enough the track coming out there I made before the Ascension EP, so it’s a really old one, but I never ended up doing anything with it. It was floating around for a while, Charlie Break was interested in it at some point but then I revamped it and sent it over to Noisia and heard back within a couple days that they wanted it.

So loads of stuff coming on a lot of impressive labels!

Yup. I think I’ll always being giving Dispatch my music because of Ant and the way that he works, the way that he runs Dispatch and all the guys there are just really good at their jobs and really supportive. It’s a great label to be on.

Rizzle – State Of Evolution EP is out now on Dispatch