We already shouted Whiney’s second album Waystone as being one of the strongest albums Med School has released in years when we announced its release.

Now with even more weeks of listening time, and finding out more about how it came to be and where Whiney is at creatively and mentally, we stand by that description even more.

It’s evident the minute you hear those ‘London’ samples and the low passed amen rumbling in the background of the almighty intro track The Capital; Whiney’s going in all guns blazing.

Those guns keep firing throughout the 14 track trip; the symphonic swagger of Notorious, the concentrated goosebumpism of the slo-mo sunset soul-out Darkest Night, the bubbly soundsystem shakes of Amulet, the list goes on….

They say the second album is notoriously difficult for artists, but you can stick that cliché on the pile with the rest of them; Whiney has come through in an exceptional way and he puts a lot of it down to two new members of the Med School A&R team. We put all of it down to every person involved in the album being on their A-game. Find out more…

Take us back to the start. When were the seeds sown?

It all started in February. My second EP dropped at the beginning of the year and we started talking about it then. Med School had taken on two new A&R heads; Chris Dexta and Chris Inperspective. They’re Medschool’s new breed, they liked my music and there was a gap in the calendar, so we agreed I should blast it out and see what we could do.

I think you can really hear their influence

Those guys know how to motivate you! Waking up to four or five WhatsApp messages in the morning every day knowing what you need to achieve or work on. I need that a little sometimes and it’s very easy to get disconnected from the label when you’re in the studio on your own. To have the conversations with those guys all the time was fantastic. It was their first Med School album so they wanted to do something special and I felt they understood me and where I’m coming from musically. I played them a whole bunch of demos and there was a lot of different tempos and styles. They were really encouraging and welcomed it. It got to the point where Chris (Inperspective) was setting me tasks like ‘make an amen banger’ and the result of that is The Capital. He really liked it.

I like that type of challenge. Gets you out of your old ways…

Yeah it was interesting. I’ve tried things before and they’ve been so bad I wouldn’t even play them to my mates. But when you do achieve something different and it feels right then it’s a very rewarding feeling because. Particularly the track Notorious

That’s one of the highlights. Matty Sense flipping kills it!

He came through and nailed it. You can visualise what he’s saying and that line ‘I’m not famous but my name is’ is my favourite line of the album. It’s so pure. I was really proud of that track and Darkest Night which was another one of the non D&B tunes. So yeah, I was happy with the variations and keen to see how people react to them. It’s interesting when I’ve dropped some of it mid set and thrown people off guard.

Have you had any adverse reactions?

Actually yeah I’ve had a person request a drum & bass tune when I dropped Notorious in Bristol the other day.

What did you do?

I ignored them and carried on playing 130 and 140 stuff for the next half an hour. We all knew I’d get back to D&B eventually. I wanted to do something different. I guess on the flip, my drum & bass has got darker over the years so if people have gone out to expect that then it might be a bit of a surprise. But I like to test the water, do different things, try different things and that’s what the album is about really. New ventures, new explorations. Hence the title.

New ventures but authentic ones… like The Capital. It feels right. It’s come from the right place.

Yeah it was quite a challenge because the amen has been used so many times in so many inventive ways. But the minute I found the main sample I knew how I wanted the tune to sound and even know what it was going to be called. I tried to bring some of my own sounds into that style that I’d never done before. I wanted it to be in your face, loud, lots of 808 basslines and switch part way through so it sounds raw and has variety that lifts the crowd. It was tough. I listened to a lot of Bukem, the entire V catalogue, got inspired then put my own take on it.

Any tunes you’ve kept for your sets during your inspired research?

Yeah pretty much every Die tune. Listening to him is like a re-education! Everything about those records is so pure, it’s not over produced, it’s raw. It just works.

Tell you what else works… you and Inja

Yeah he’s alright isn’t he! We’ve written about 13 tunes together now. Some that have yet to see the light of day. He’s the type of guy who if he gets it, he properly gets it and does something amazing… And if he’s not feeling it, he’ll be honest. When I work with him I know the project will be 10 times more exciting because he just brings this energy and this positivity that we’ve all seen in his shows and hear in his lyrics.

Such a positive vibesmith, he’s killing it…

Yeah man, he’s just that guy who is a beacon of the scene right now, not just in his music but in his attitude and everything. I really hope that gets recognised at this year’s Drum&BassArena awards.  Not that he needs it. He’s one of the happiest guys in the world. He doesn’t care. He’s going to be a pioneer in years for sure and his work rate is just phenomenal.

So’s yours man… The first interview we did was exactly two years ago and you were on your first EP. You’re two albums deep now!

Those first two years was me getting to know the industry, finding out what my strongest points in production were. Then over the last year, with the help of everyone at Med School and loads more DJing, it’s come to me naturally. You stop overthinking, you do it because you love it and stop wasting time worrying about what people might think about it. I’ve found myself dancing in my chair during sessions during this album, absolutely buzzing… And that’s where I want to always be.

Whiney – Waystone is out now 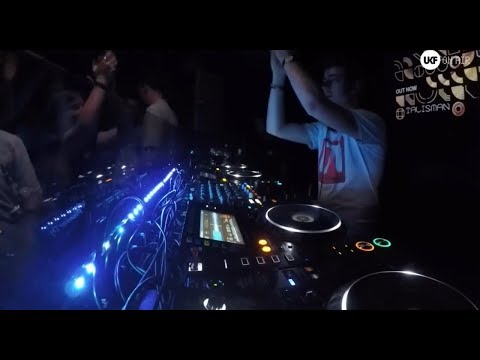 Whiney – UKF On Air x Med School
VIDEO
0 shares
SIGN UP NOW & STAY LOCKED!Sign up to our newsletter to keep up to date with the latest streams, news, and events, all tailored to you.